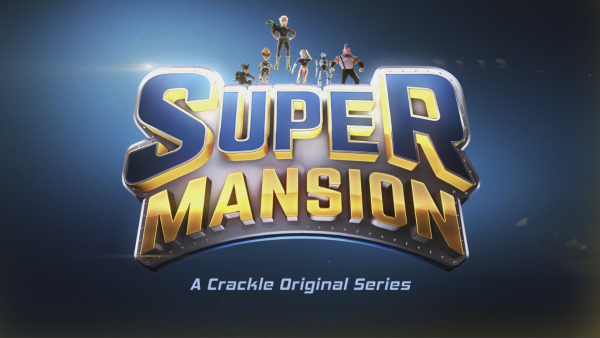 The newest episode of SuperMansion sees the team tackling many foes: disappointed parents, meaningless relationships, customer support and the Russian mob. Lex has the least to do in this episode, but she is not completely ignored, making it an engaging episode for fans of each hero.

END_OF_DOCUMENT_TOKEN_TO_BE_REPLACED

The latest episode of SuperMansion is the first of the series to present a strong message as well as a ton of pop culture jokes. It is also the first episode that features Brad. It turns out Brad is not a natural-born superhero like Rex, but instead is the result of an experiment at Optocorp, a combination of real life “evil” corporations and Oscorp from the Marvel universe. Brad is the first and only subject to survive the administering of their serum. It increases his size and strength, and makes him virtually invulnerable. The only thing that didn’t increase in size is his head. Oddly enough, it is not the serum that makes him pink, it is just his natural coloring. 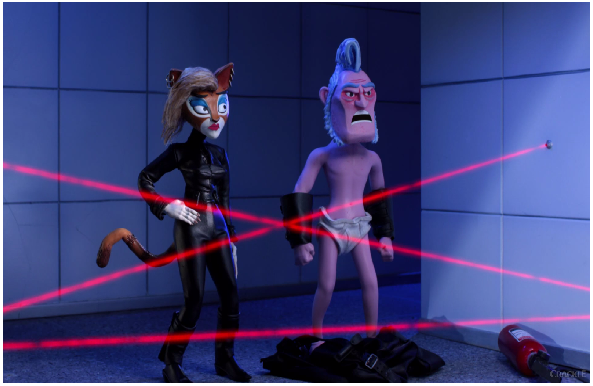 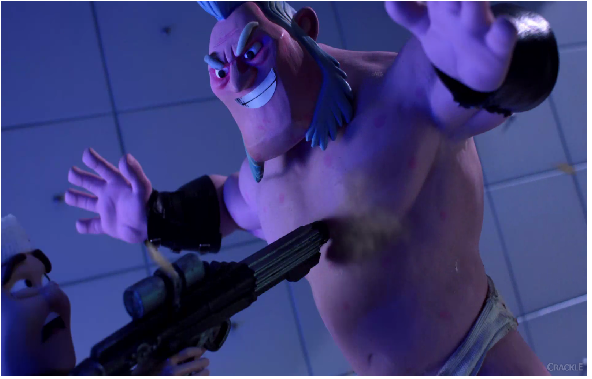 Since Rex left his home as a young man, the League has been his family. Like all families, it has continued to go grow over the years. Brad joined the team just a year ago after Rex found him beating up a drug dealer in Piston City. Every day for a year Brad has been hiding the fact that all of his abilities come from the serum Optocorp continues to provide him, and when a shipment fails to arrive, he quickly begins to revert to his normal self.

We are introduced to two new villains in this episode: Ratapult and Whiplash, a new evil duo that is trying to steal a baby panda from the local Storm City Zoo. However, this non-dynamic duo is not the main antagonist for Brad in this episode. It is what the majority of the team fears most, game night. The first Friday of every other month is officially league game night and is strictly enforced by Rex. Rex loves board games of all sorts, but is a sore loser and winner, and must physically threaten the rest into playing with him. 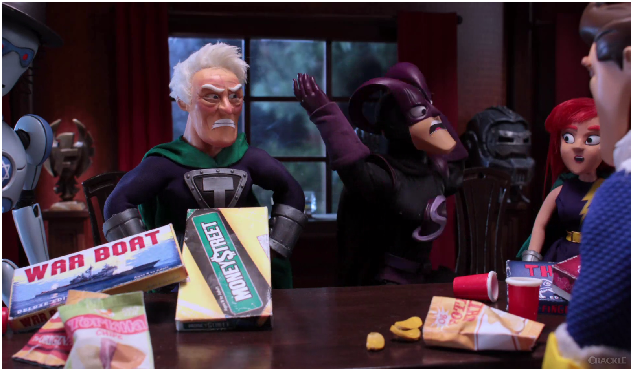 Optocorp has cancelled the drug trail that made Brad a superhero and has moved on to a new project, Project Chad. He is disposing of all the remaining serum and refuses to give what’s left of the stock to Brad. The only response Brad can come up with is to plan an Ocean’s 11 style heist. He originally plans to go alone because he is afraid to let the team know his secret, but when he is caught in his natural form by Cooch, she offers to help him so she can get out of game night. Once Cooch is on board, Brad decides that going with a team is best. Unwilling to ask the rest of the league, he turns to the villains that are locked in the basement of the mansion.

Will Brad get his serum back and once again become a hero? Will he regret the choice to form a team with super villains? And what will Rex do if they don’t make it back for game night?  Find out now on an internet connected device near you.

One of my favorite things from the newest episode of SuperMansion takes place in the intro: We see a quick glimpse of all the villains the League has had to fight this season, followed by the silhouettes of the bad guys still to come. There seemed to be a lot of them, which raises my hopes of a full on League of Justice vs the Injustice Club fight.

END_OF_DOCUMENT_TOKEN_TO_BE_REPLACED

Congratulations, it’s a girl! Lex Lightning may be the long-lost illegitimate daughter that Rex never knew about.
END_OF_DOCUMENT_TOKEN_TO_BE_REPLACED

The title of this episode is obviously a play on the 17th century fairytale Puss in Boots, a story of a talking entrepreneurial cat who comes from humble beginnings to be the pet of a great lord. As the title suggests, this episode focuses on Cooch, who during the filming of an educational PSA is outed as being illiterate. There is no villain, returning or otherwise in this episode, instead, the “bad guy” is Sgt. Agony who is back for the first time since episode 1. Agony stumbles across a YouTube video of Cooch struggling with cue cards while looking for clips that promise to blow his mind. 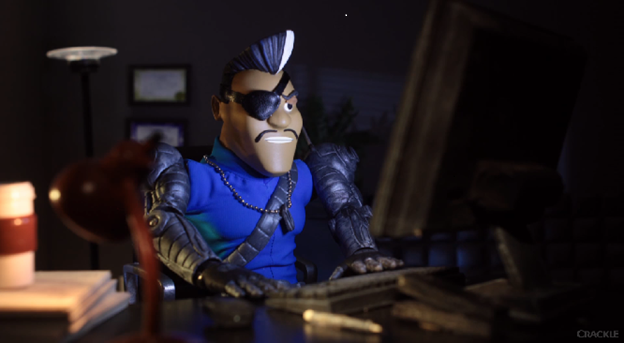 Since being defeated in an accounting battle by Jewbot, he has held a grudge against Rex and the rest of the League of Freedom, and plans to use a rule about minimum education standards to kick Cooch out of the mansion.

The secondary story-line follows Ranger as he makes a heartbroken trek across the country looking to restore his faith in the American Dream by traveling to Detroit. 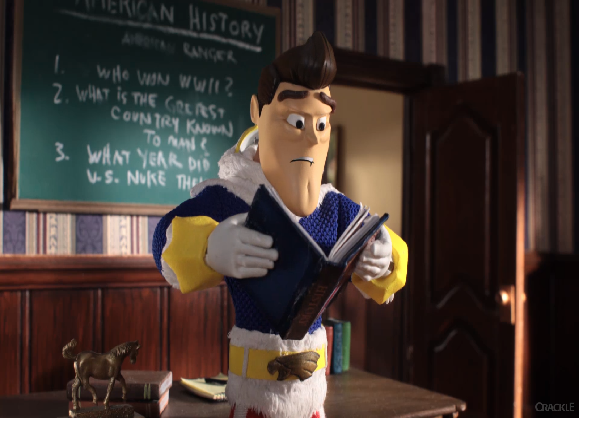 Ranger was disillusioned about the state of America after teaching US history to Cooch and learning some alarming facts. Unlike the scene in the first Avengers movie where we see Captain America’s notebook of things to learn about, no one bothered to mention the bad side of American history to Ranger: the assassination of JFK, the resignation of Nixon, the Iran Contra, 9/11 and Joe Millionaire. Ranger has a crisis of faith and sets off on his American-built motorcycle to reignite his love for America. Along the way he meets Reggie (voiced by Breckin Meyer) who tells him the best way to experience the Dream is to get high and ride into the desert to meet his friend Hawkfeather.

After Ranger’s breakdown, Cooch is left with principal Rex, school bully Saturn, chemistry teacher Brad and home economics teacher Jewbot, and one week to prepare for her GED exam in order to stay in the league. Rex spends most of his time, worrying about Cooch, arguing with Sgt. Agony and answering phone calls that would make you think his number was 876-5309. Saturn is completely unhelpful teasing Cooch and attacking Rex with spitballs. Brad is more focused on getting back into an intimate relationship with Cooch than being a good teacher. Jewbot on the other hand is desperate to be a positive influence in the Robin Williams from Dead Poets Society and Good Will Hunting mold.

While Cooch is battling a catastrophic case of ADD, Ranger finally meets Hawkfeather, who tells him that he must fight and defeat his spirit animal in order to heal his spirit or die trying. A man who dresses up as a giant star spangled bald eagle has a surprising spirit animal. 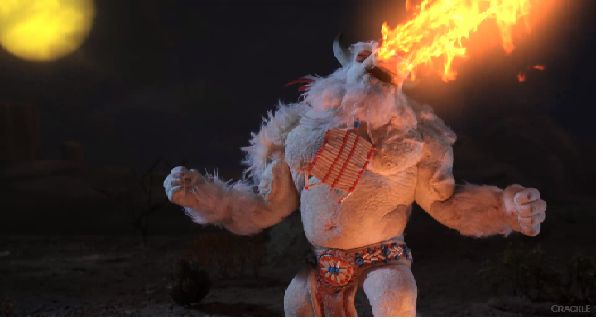 A fire breathing albino buffalo is the symbol of Ranger’s inner turmoil over the loss of his belief in the American Dream.

Will Cooch pass her test and get to stay in the mansion, or be forced to return to her life as a regular cat? Will Ranger find his faith and be able to defeat his spirit animal, or will the team possibly lose two members? Find out next Thursday October 29th, on an internet-connected device near you.

Let’s talk about Rex baby, let’s talk about all the good things and the bad things that may be in this episode. The third and final episode of the initial release of Supermansion that will cover themes of the circle of life.

An injured Rex is forced to face his mortality while Cooch is in heat and welcoming almost all suitors. While the last episode was dominated by movie references the pop culture inspiration for this episode seems to be things seen on TV. We see a Tom Cruise-esque couch jump on a Jimmy Fallon inspired talk show, and a call back to the McDonald’s nothin’ but net commercial from the early 90’s.
END_OF_DOCUMENT_TOKEN_TO_BE_REPLACED

I wouldn’t say this show is out to teach us a lesson like most animated shows, but that doesn’t mean you can’t learn something from it. This episode could teach you to keep in contact with the people who are important to you because time passes quickly. Or you could learn about the difficulties that can accompany pet ownership. This episode contains many references to movies starting with the title and hitting movies of all kinds like: Aliens, Gremlins, Seabiscuit, Ratatouille, and Babe. This episode is full of fun and nostalgic references, and continues the high quality of the pilot episode.
END_OF_DOCUMENT_TOKEN_TO_BE_REPLACED

Crackle’s first animated stop motion show premiered October 8th with its first three episodes. It then will become weekly for 10 weeks ending December 17th. This is not a show for the easily offended among us. It will make jokes about race, gender, age, weight and religion and do them very well. After watching the first episode I couldn’t wait to see more, the jokes came quickly and nonstop which lends itself to repeat viewing. In a world of superhero teams and their origins, Supermansion instead follows a well-established team and its senior citizen leader Titanium Rex (Bryan Cranston).
END_OF_DOCUMENT_TOKEN_TO_BE_REPLACED