Well, dear readers, we reach another week, and that can only mean one thing.  It’s time to start look at another episode of X-Men:The Animated Series.  When we last visited our mutant friends.  They had just defeated Magneto from using nuclear weapons and Professor X had taken in Wolverine’s swore enemy Sabretooth in for some treatment.  What sort of plans will Magneto unleash upon our heroes and will  Charles Xavier be able to calm down the rage of Sabretooth.  Let’s find out. END_OF_DOCUMENT_TOKEN_TO_BE_REPLACED

Hello X-Fans. We are back for another exciting entry into the X-Men The Animated series.  What new adventures await are mutant friends.  Well, when we last left our heroes.   Beast was being captured by the Sentinels because of the break in to the Mutant Registration Building and is being held to be put on trial. Will The X-Men break him out or will Beast be able to pass his bar exam in time for the trial.  Let’s not sit around like Professor X (too soon?)  and get going with this week’s  adventure. END_OF_DOCUMENT_TOKEN_TO_BE_REPLACED

Of all the villains in the Marvel Universe, one that is often listed as one of the most powerful is that master of metal…Magneto. This evil mutant is usually pitted against fellow mutants The X-Men. But remember, in this series Spidey’s got a few mutants in his corner. So it’s up to them to stop Magneto in The Prison Plot. 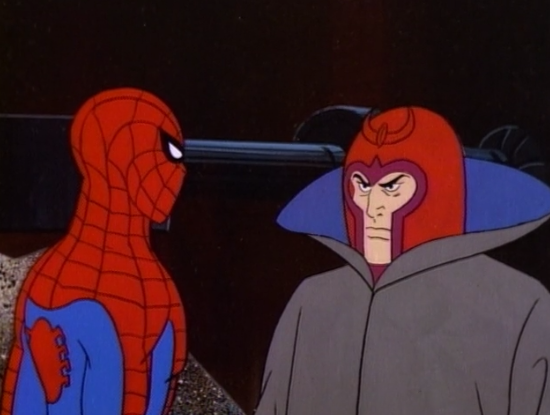 As our story begins, dozens of police officers are attending the National Police Chief and Warden Convention, which for some strange reason is being held at a prison. Peter, Bobby, and Angelica are working as gophers for the convention in an attempt to earn money to buy a present for Aunt May’s birthday. The entertainment for the convention is an escape artist called Proton the Great. Spidey, however, quickly recognizes him as Magneto. When Spidey confronts him, Magneto promptly seals the wall crawler in a giant hourglass with sand pouring down on him. END_OF_DOCUMENT_TOKEN_TO_BE_REPLACED