Two episodes in and the best way to sum up Preacher is baffling but fun. My main hope for the second episode of Preacher was that it would slow down, be a little more focused, and begin to unravel the story that will be told over the 10-episode season. It was not better by leaps and bounds but it was an improvement over last week. Instead of splitting the story almost in thirds, it strongly focuses on Jesse with Tulip and Cassidy acting as supporting characters.

I will get the bad stuff out of the way first. The weakest parts of this episode are its strange opening and a scene of a father and daughter selling their home to a shadowy company. The mechanics of the scenes were great, well acted, beautifully shot and the man in the prologue looked like he could be a villain in The Revenant sequel. The problem with these two scenes are that they were not connected to what was happening in the main story line at all. I am sure they will play a role as things progress but something as impactful as the opening scene should have had more to do with the episode that aired tonight.

Jesse is a deeply flawed Preacher and borderline if not a full-blown alcoholic. It might be possible for him to get a handle on his drinking if he would ever confront his past and try to move beyond it. After his declaration of being the Preacher the town deserves he decides to baptize anyone that is willing to make a fresh start and unite as a church with god.

Other than the baptisms, he still does not seem excited to meet with certain members of the congregation, but the town pedophile and a woman angry with god over her daughter’s injury are particularly tough cases to be fair. It is his interactions with these two that help him discover his powers. He still does not know how to control them or the extent of them but he thought of a way to test it and we will find out more next week. I am curious to see if this discovery will make him rethink what happened to Donnie and his role in it. If he does come to the conclusion that he is responsible, will he be wracked with guilt, will he vow to use his power more wisely or will the old Jesse come out and use his ability for something more sinister. Restoring faith and battling urges may not be Jesse’s biggest problem, there are two men in town that want whatever is inside Jesse and will take it peacefully if possible but plan B will require the town to find a new preacher. Dominic Cooper did well again this week, he didn’t have the same level of action to perform but his interactions with Tulip and his bonding with Cassidy are highlights of the show so far.

While the interactions between Jesse and Tulip may be a high point, I am beginning to think Ruth Negga may be my personal low for the series, at least to this point. She is fine when Tulip’s personality is more restrained but when she tries to go big I just have a hard time believing it, but I hope she will continue to grow on me. We did get to find out more about what she is up to in this episode. She has recovered the map for Dany, a character we know only in name for now, who sent her to find it for a client of his. Neither of them know what the map is for but in return, they have been offered some information that they could not refuse. We know as much about the map as we do the information that Tulip will for it, which is nothing. It is another mystery to be solved, but it is obviously something from the past that involves Jesse and explains why she has been hounding him to join the job.

Will the information pull him back into the world he left behind or is Tulip right about him fighting a losing battle and he will revert to the true Jesse and leave the pulpit for good. Or will she be able to seduce him back to the dark side. Tulip did have the best joke of the night when she referenced a Carrie Underwood song while pranking Jesse.

One mystery that has had a little bit of light shined upon it is just who or what Cassidy is. In his own words, he is a right-handed Sagittarius who dislikes the Big Lebowski and is a 119-year-old vampire from Dublin. He starts on fire if exposed to the sun, which is better than bursting into ash and worse than sparkling. He can seemingly survive any amount of physical damage as long as he has some blood to drink to help him heal. Cassidy gets the big action scene this week when he takes on the men trying to remove the force from an unconscious Jesse. 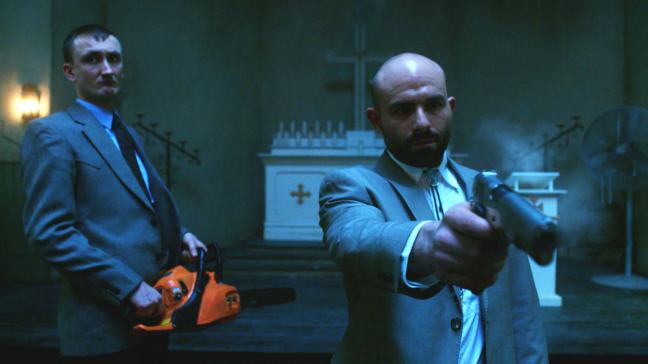 The blend of CGI and practical effects is great and makes for lifelike gore that could be hard for some people to watch. One thing I dislike about the Cassidy centric fight scenes is that they speed up the footage from time to time to make him appear more supernatural. However, it is a small detraction from a very entertaining scene. Cassidy is still living in the attic of the church stealing the communion wine and from the collection plate to help a sick grandmother. He likes Jesse but he wants him to go back to his old self just like Tulip because he thinks the current Jesse is boring. We know whom Cassidy is hiding from now, a group of vampire hunting religious vigilantes, but we do not know where he is going or whom he is working with, because no one believes the story about his grandma.

What are the extents of Jesse’s powers? What information is Tulip going to get in exchange for the map? Will the hunters find Cassidy before he gets the money he needs? Who are the people that attacked Jesse and are they twins, clones of life model decoys? I hope that episode three will continue to provide us with information without presenting too many more mysteries. We will find out together next week and if you feel I missed something please mention it in the comments.