Have you ever wanted to watch a show and when you turned on your TV there was a sporting event or news broadcast on in its place? Sometimes if the show is popular enough it will start from the beginning and just run long forcing a show later in the evening to adjust. However, if it is just a middle of the road show or something more popular is on later you will hear the message; “we now join this program already in progress.”That phrase is what kept going through my mind while I was watching the Pilot episode of AMC’s new show Preacher. That in of itself does not mean that the episode was good or bad, just that it hit the ground running and throwing everything at you without much explanation if any. I can see how that would make it an unpleasant experience for many views especially those that were not a fan of the comic series.  According to Wikipedia, we meet at least four of the seven main characters in the initial episode. Overall, I enjoyed this episode but it felt frenzied, like the producers and directors wanted to get hints of everything you could see in this first episode. I will not be shocked if the second episode is pretty different from this one, mostly in the pacing. I highly doubt it will change as much as the pilot of Star Trek where Kirk was not the captain of the Enterprise and Spock showed emotion.

Jesse Custer is out main character, the preacher who has come home to take over the care of his father’s flock. The congregation is small and may only be there out of habit or it is possible Jesse runs the only church in the small town. Jesse may not be the best pastor, he lacks confidence and is obviously troubled by unknown events in his past, and the beatings he received at the hand of his father. He is so distracted by his thoughts of the past or maybe just a past love that he does not even notice his assistant is yearning for his attention. We get to see him doing his best to be a good preacher, from sharing his sermons, visiting a member of the church who is unsure if he would be welcomed back, to investigating the claims of domestic abuse made by a child. I am becoming a big fan of Dominic Cooper. I have enjoyed his performance here so far and loved him as Howard Stark in the Marvel Universe. He has been passible at worst in everything I have seen him in, and this looks as if it could be my second favorite work of his. To be fair second place is currently held by Need for Speed, not a high bar to clear. He seems capable of handling the action that the show will require and he was a highlight in the best bar fight since Kingsman. It was the little smirks and smiles in the middle of all the fighting that hint at the kind of man Jesse may have been before returning to his childhood home.

Another Marvel universe member turned Preacher lead is Ruth Negga as Tulip O’Hare. She grew up with Jesse and was part of his life before he became a preacher and she is still deeply involved in the lifestyle, whatever it may be. I am not sure if she is a treasure hunter, an assassin or a gopher for some big time criminal. Whatever she is, she does have a scene that would make MacGyver very proud or jealous. I have not seen every episode of that show but I do not think Mac ever built a moonshine bazooka. At the end of the episode, we still do not know what she is after but we do know she wants Jesse’s help and that she is a bad influence on a man trying to atone. This was the weakest performance of the night in my mind with the exception of her conversation with the two children. She may not have been my favorite tonight but I have faith in this deadly flower.

Since I never got around to seeing the 2012 movie Lockout, or Space Jail as some fans affectionately know it, this is my first time seeing Joseph Gilgun. He plays Cassidy an Irish man who became a monster or a monster, who takes the form of an Irishman. He is a killer who shows no remorse, drinks the blood of his victims and does a horrible Mary Poppins impression to exit a plane. If he was planning to use it as a parasol and not a comedic element it might as well have been left behind. We know that he needs to lay low for a while; however, whom he is hiding from or who is giving him the order is a complete mystery at this point. He gives Jessie an open seat in the bar and without asking he takes up residence in the attic of the church as payment. He is limited to very little screen time in this episode but I have a feeling that I could really grow to like this character, assuming he does not turn out to be the big bad. 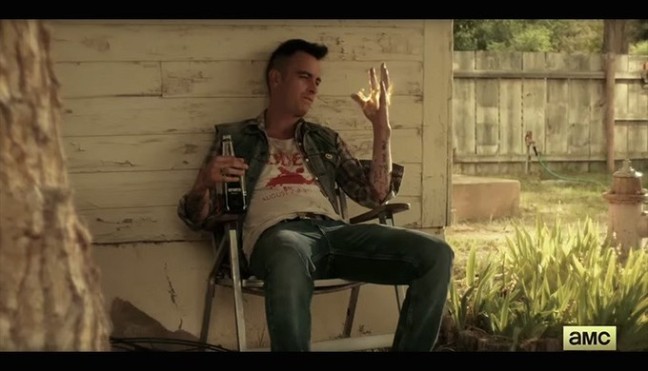 The show is very well shot; from the opening scene of the force, whatever it may be, travelling from outer space that looks like it is being shown on a film projector. The fight choreography is good, very intense and gory at moments. The acting is very good in this first episode for the most part. A scene that sticks in my mind is the one where Jesse talks to the woman who may or may not be being abused by her husband. The look on her face as she tries to hide her secret from him until he convinces her to share her story. The best joke of the episode is one that appears on a TV screen in the background, showing a news story about Tom Cruise exploding at a Scientology church.

I hope the characters continue to be developed and that the show can become less hectic and ease into an exciting and well-paced story because I want to learn more about these characters. We know that something has entered Jesse and that it made him decide not to abandon the church, to stay and be the preacher that the town deserves. Whatever this mysterious force is I doubt it will stop there. We briefly saw what it is capable of in Africa and a few other locations as it traveled the world looking to inhabit the right man or woman of faith. I am excited to see what this will mean for our main character and for the rest of the small town.