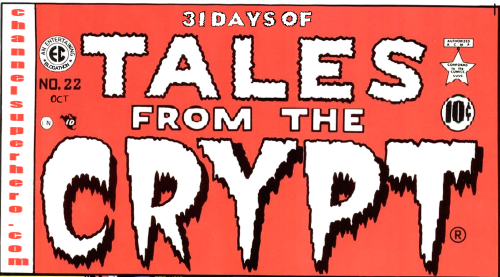 Welcome back kiddies! Cryptkeeper Bubbawheat here to introduce the second day of our 31 Days of Tales From the Crypt. Today’s episode comes from David Babbitt who is part of another site dedicated to the moving images inspired by comic book panels over at 24 Panels per Second, where he and the rest of the team cover comic book movies in a monthly podcast as well as the occasional episode on a new release or a written article. Here, he takes a look at a great episode from the third season that I always felt had a very western vibe to it even though it’s set in the modern day. Carrion Death.

Among television comic book adaptations, few are as faithful to the spirit of their source material as HBO’s horror anthology Tales from the Crypt, which ran from 1989 to 1996. Adapting stories published across EC Comics’ wide range of anthology titles – which, in addition to the titular Tales from the Crypt, included Vault of Horror, Crime SuspenStories, and Shock SuspenStories – during the 1950s, Tales from the Crypt embraced the freedom HBO provided it as a pay cable channel to be as ghoulish, gory, juvenile and, most importantly, funny as the short seven page comics from which they originated. Sure, the episodes often updated the material for a contemporary context, and there is no mistaking the often self-aware tone of many of the episodes for being quite what primary EC Comics’ architects Bill Gaines and Al Feldstein intended. More often than not though, HBO’s Tales from the Crypt aimed to be as gleefully outrageous as Gaines and Feldstein’s comics.

There are times where the comics and the television series part dramatically, however, such as in the case of the story “Carrion Death.” I’ll tip my hat by noting that both versions of the tale are extremely enjoyable, if for wildly different reasons. Yet in considering both incarnations of “Carrion Death” alongside one another, the television adaptation serves as an illustration of how the Tales from the Crypt program could limit itself through its knowing absurdity and pursuit of tonal consistency between episodes. 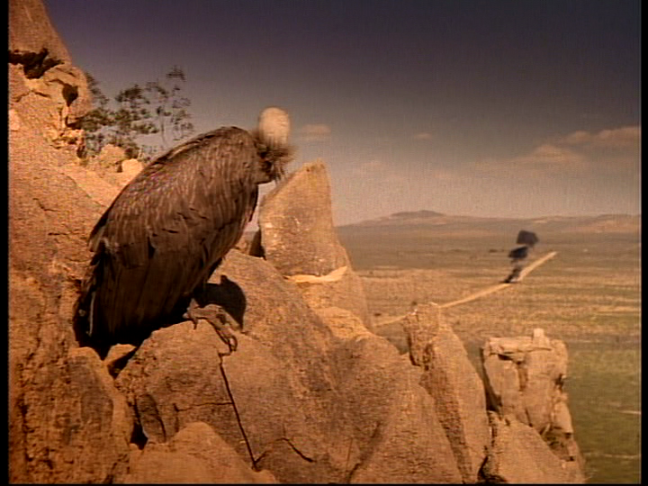 Both the original comic story, which was published in 1953 in issue nine of Shock SuspenStories, and its 1991 television adaptation tell roughly the same story, in which a bank robber/murderer makes a perilous journey through the desert on foot with the corpse of the police officer he murdered handcuffed to him. After days of lugging the corpse around in the middle of nowhere, the criminal desperately tries to separate himself from the body: in the comic, the nameless criminal allows a flock of buzzards to feast on the body of the cop while he sleeps, only to “awaken” later to discover that he himself has passed away and become part of the buzzards’ meal. In the television version, the criminal, here named Earl Digs (Kyle MacLachlan, Twin Peaks: Fire Walk with Me), tries to separate himself from the body of the cop (George DelHoyo, Rango) only to succeed in severely injuring himself. Paralyzed, Digs is soon selected by a buzzard as food over the corpse of the nameless officer, and the episode ends with Digs screaming in agony as the buzzard feasts on his eye. 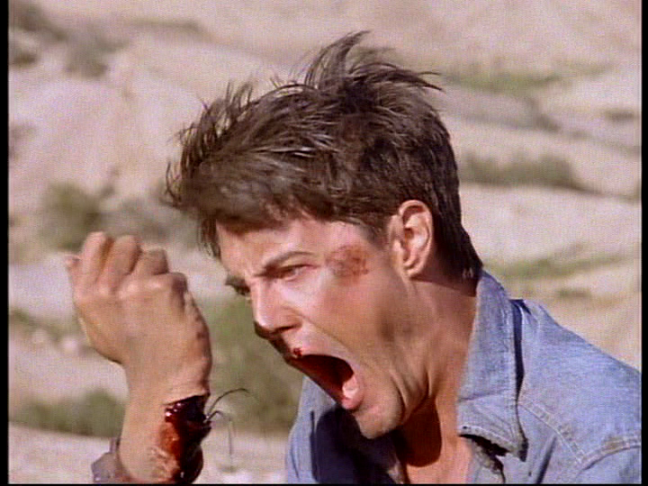 Despite the similarity of plot between the two versions of the story, their respective executions are radically different. The Feldstein scripted comic, which features art by Reed Crandall, is a stark and brutal first person narrative despite Feldstein’s tendency towards purple prose. Crandall’s expressive art captures the desperation of the criminal’s situation, and while the criminal receives his “punishment” at the hands of the buzzards at the conclusion of the tale, his death doesn’t carry any real moral imperative. From the opening panel, in which the criminal bellows at the vultures to come and free him like they were some sort of deity, to the manner in which the vultures eat away at the body of the officer as well as his murderer, there is no order or meaning to this world beyond the inevitability and indignity of death. Moreover, given the comic’s publication in Shock SuspenStories, there is no horror host to try to impose a sense of morality on the tale or, at the very least, lighten the mood.

Writer/director Steven E. de Souza’s 1991 adaptation of “Carrion Death” for Tales from the Crypt does not share the comic’s bleakness or absent morality. In de Souza’s reworking of the material, Earl Digs is no mere bank robber and murderer, but rather a serial killer who has managed to escape death row. This change conflates Death and the Law, and it is an association de Souza reinforces throughout the episode, starting with the Crypt Keeper-hosted segments, which finds our decaying host dressed as a motorcycle cop. Within the episode proper, the nameless police officer pursuing Digs jokingly refers to the single vulture who silently observes the action as his “partner,” though it seems less like a joke when the vulture bypasses the body of the officer to feast on Digs at the episode’s conclusion. 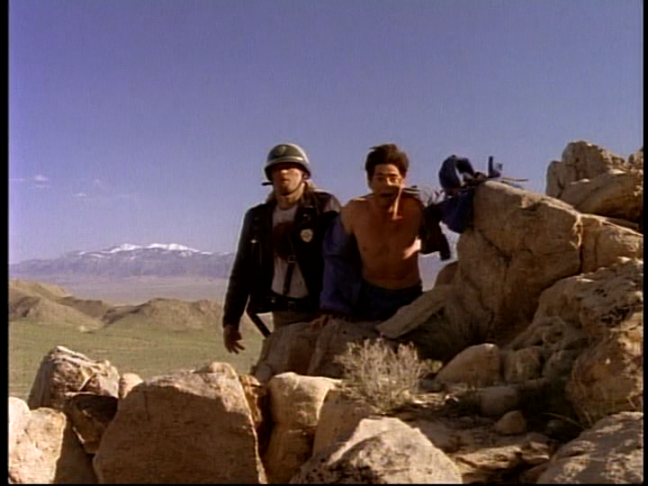 Working in tandem with this newfound morality is the major tonal shift de Souza makes to the source material: in the show, the story is mainly played for laughs. Digs’ hardships are not the meaningless cruelties of life and death, but rather the just suffering of an unrepentant monster; as a result, the audience is invited to laugh at every bad thing that happens to Digs. Under de Souza’s direction, MacLachlan gives a Bruce Campbell-esque performance filled with physical shtick and cocky bravado — so much so that one has to wonder if Campbell was de Souza’s first choice for role. MacLachlan does bring a streak of darkness to Digs that an actor such as Campbell would likely have been unable to achieve, thus making Digs’ fate all the more satisfying as it plays out.

So on the whole, the television incarnation of “Carrion Death” works. Certainly, as someone who used to stay up till midnight on a Saturday night to catch syndicated versions of Tales from the Crypt, the episode made a lasting impression, enough so that it was one of the episodes I was excited to tape off of the Canadian specialty channel Space when they started to air reruns in the early 2000s. Yet knowing what the source material is like, it is hard not to feel a tad disappointed in the episode. While a straightforward take on the story would have been out of place on Tales from the Crypt, there is no question that “Carrion Death” could have been a more affecting work in another television venue. Of course, twenty-four years on, it is not as if another venue for straightforward horror has really arisen to tell bleak tales such as Feldstein and Crandall’s “Carrion Death.” 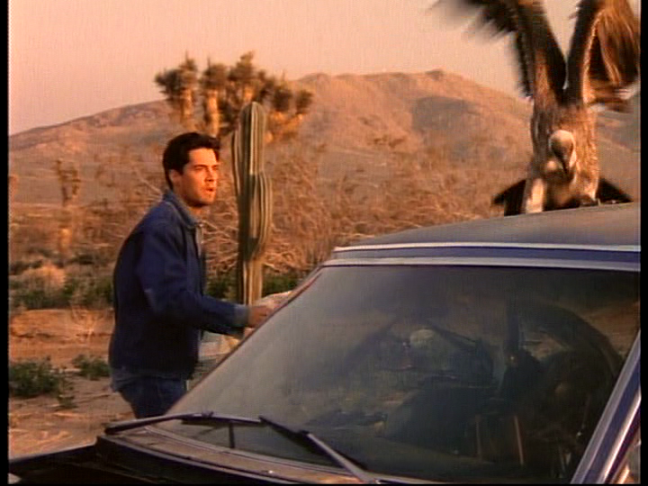 Still, for those looking to put together a Tales of the Crypt marathon this Halloween, de Souza’s “Carrion Death” certainly deserves a slot in the lineup. The episode delivers all the morbid humour one would want out of the series without veering too far into camp. At the very least, you get to see Kyle MacLachlan dancing with a corpse, and who doesn’t want to see that?