When we last left Gotham City, Mr. Freeze had just frozen Batman and Robin in their tracks and escaped with the diamond stolen from the lovely Princess Sandra. Will our two caped popsicles be able to thaw out before the villain strikes again? Get out your thermal underwear and get ready for part two of our story, Rats Like Cheese.

As we begin this episode, Batman and Robin are at a local hospital in the de-icing chamber, slowly being warmed up. Through a window in the chamber, a number of city officials (including Commissioner Gordon and Chief O’Hara) look on…hoping for the best. Gordon even glances skyward and asks, “Why?” Of course, our episode wouldn’t go too far if the heroes didn’t thaw out, and they are all smiles when they do.

The next day, Bruce Wayne and Dick Grayson are due to accompany Princess Sandra to a baseball game, where she is due to throw out the first pitch. At the last moment, though, there is a change in the starting pitcher for Gotham’s team. Ace hurler Paul Diamante is replaced because he’s gone missing. Diamante, of course, is Diamond in Spanish. Mr. Freeze has struck again. What Freeze is really after, though, is Batman. He demands Batman turn himself over for the safe return of the star pitcher. Batman agrees and tells Robin to stay behind as he heads off to the rendezvous with Freeze’s men in their helicopter. 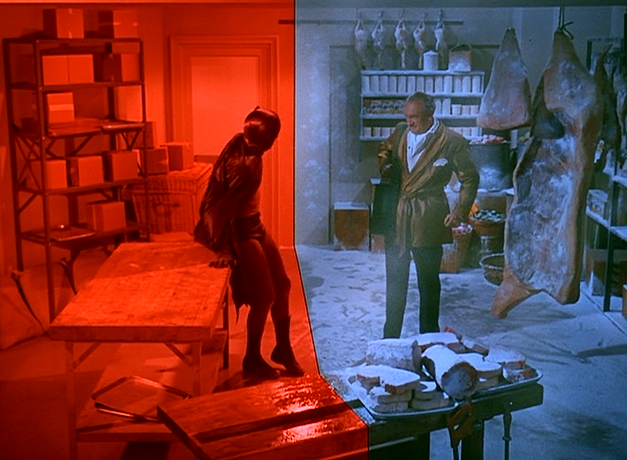 At the villain’s lair, Batman is kept inside a small heated area to protect him from Freeze’s sub-zero environment. Not that Batman doesn’t try to jump out and subdue Freeze, but he just can’t stand the cold. Soon, Batman finds that Freeze has also captured Robin (who of course followed Batman despite his orders not to). Now, Freeze intends to get rid of the heroes once and for all. He gradually starts making the heated area smaller and smaller. But to his surprise, Batman survives the sub zero temps. You see, the Caped Crusade was just faking it before…he’s actually wearing his Special Thermal B Long Underwear. The fight with the henchmen begins and, in the end, Freeze ends up back in police custody.

First, I’ve got to get this off my chest: what on earth does the title, Rats Like Cheese, have to do with anything in this episode? All I can figure is that cheese rhymes with freeze!?! Maybe it has something to do with the baited traps set by Freeze…like a mouse or rat trap. Still, that’s a heck of a stretch. 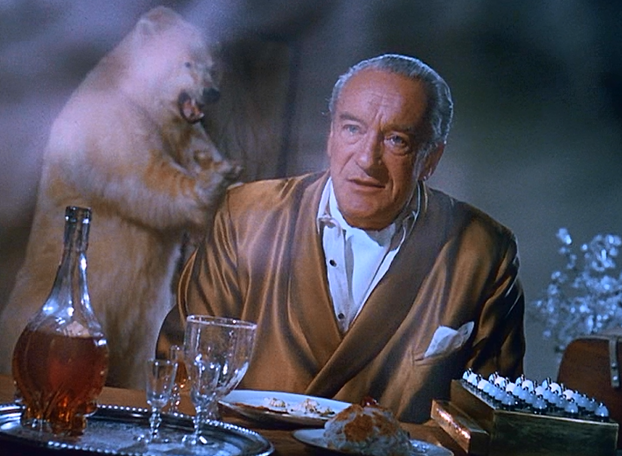 I would say that this episode is a bit of an improvement over the previous installment, but it’s still not quite the same style that we got from our previous adventures. One thing that was quite interesting in this episode was that George Sanders’ Mr. Freeze takes on a role of being more like a Bond villain than the typical member of Batman’s rogue’s gallery. In the sequence where Freeze has Batman and Robin captured at his lair, he takes a moment to dine with them. He sits with his fancy dinnerware, eating finely prepared dishes like Baked Alaska. He even offers Batman some chilled adult beverages…but, of course, Batman does not drink. Since we’re not going as extreme with Mr. Freeze as the series did with previous bad guys, making him the cultured Bond villain type is a nice touch.

One of the best moments comes in opening sequence in which the Dynamic Duo are being thawed out. There is a doctor monitoring the equipment who is listed in the credits as Dr. Vince. He’s played by an actor with an awesome name: Dan Terranova. Many experts say he is clearly a parody of TV’s Ben Casey. I really have no background with that show, but the moment is still laugh-out-loud funny. As Commissioner Gordon asks about the progress, Vince exclaims, “What do you want, miracles? I’m doin’ the best I can. The best I can do and that’s all I can do!” On a whole, though, this episode has a bit more serious tone than many Batman episodes do. Now, take that with a grain of salt, since this show never takes itself too seriously. But remember, Freeze is only out for revenge in this. There’s no outlandish schemes like our other villains have had so far, so that does give the whole thing a less comedic tone. Even if “Special Thermal B Long Underwear” is funny.

It’s not until season two that Mr. Freeze returns to Gotham, but next time we get something completely different. Our first female villain! No, it’s not Catwoman. Poison Ivy, you say? Ha! Uma Thurman was first to play her in live-action form. Nope, this is a villain who was original to this series. Prepare yourselves to meet Zelda the Great…next week, same bat-time, same bat-channel (superhero).