I’m a little bit behind on this, but before the premier of Heroes Reborn I wanted to talk a little bit about this webseries that intends to bridge the gap between the original run of Heroes and the new series. I did watch it a couple weeks back but hadn’t gotten around to writing about it until now. The series mainly focuses on a single character Phoebe and her journey of exploring her powers before getting caught up in some of the conspiracy that will likely be explored in more detail in the series proper. I did enjoy it, especially since it does take a look at a couple more normal characters, and when I say normal I mean that they aren’t movie star level attractive, the actors in the two main roles are much more like average people. It’s just that one of them happens to be able to control light and shadow. This was a six episode webseries and while it has been uploaded on YouTube, I will just be embedding the first episode in this review, the rest can be watched on YouTube or on NBC.com.


I won’t go episode by episode with my thoughts, but I will share my thoughts on this webseries as a whole. I think it’s easiest for me to compare this to the other network webseries Vixen that I have been watching for the past few weeks, and between the two I would give the edge to this one. Where Vixen is essentially a single episode sliced into six bite-sized chunks with cliffhanger appropriate breaks, Dark Matters is a much better fit to the webseries mold. Each episode does further the overall story, but they are also self-contained episodes in and of themselves. There is still the element of mystery where you want to find out what happens next, but it’s not the same type of cliffhanger where you are left without a resolution to that specific episode.

I also like the fact that there is this sense of escalation across the six episodes, starting with the seemingly harmless first episode that shows us this unassuming young woman named Phoebe who just happens to be able to move her own shadow. But each episode adds another element to her power and the danger that shows the audience that there is more to it than just shadow puppets, she is even implicated in a massive EVO terrorist attack. Which brings up another element of this series, through the course of following Phoebe’s journey we also learn quite a bit of what has happened to the world of the show in the years since season four. I don’t recall if the later seasons of Heroes coined the term EVOs, but at least here it’s used as the shorthand for people with abilities. There’s also a level of fear and distrust that is shown as being similar to the X-Men’s mutant registration act, only with a much more modern homeland security post-9/11 touch to it.

There’s also the added touch of the narration by the unfortunately named Hero_Truther who is a hooded hacker that runs an underground EVO forum that falls somewhere between Reddit and a conspiracy theory nut forum. It’s fairly obvious to anyone who had watched the first run of Heroes that Hero_Truther is actually Micah, and he does reveal himself in the final episode. He has a bit of the cyberpunk flair to his broadcasts and it wouldn’t surprise me if some of the seemingly random footage used in the background and the clips will actually show up as part of the series proper, but time will tell. It was nice to see Micah return, especially since I had gone back and was watching the first season where he was such a young kid. 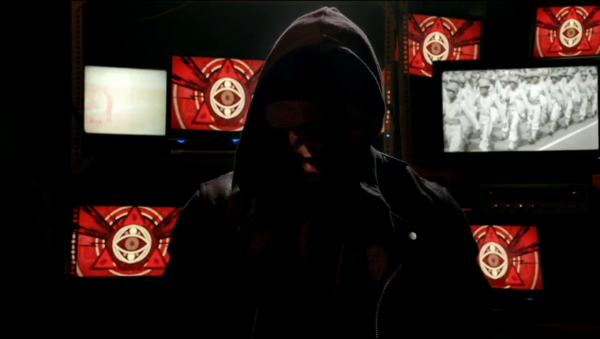 One character that I haven’t mentioned yet is Quentin, Phoebe’s brother. He’s a bit of a slacker and conspiracy nut himself, but is very supportive of Phoebe in regards to her powers and her return to college. Henry Zebrowski does a great job of transitioning from episode one where he is a bit of a slacker playing Playstation all the way through the loss of his sister where he becomes more disheveled and crazed as he tries to find the connections to these conspiracies that everyone would tell him aren’t really there. He gets himself in deeper than he would have ever imagined, and they lead him to his final destination with the reveal of HRG himself, Noah Bennett. I will say that it’s worth it to check these episodes out before the 2 hour premier of Heroes Reborn tomorrow as I’m writing this. You can read my thoughts on that episode here on Friday night.