I’ve often said that as a child my first exposure to many celebrities was seeing them as guest stars on The Muppet Show. One I remember very clearly was pianist Liberace. He was a little hard to forget with his flashy outfits and rings on every finger. Well, a decade before The Muppet Show, Lee (as his friends called him) guest starred on another TV classic…our very own Batman. Here he is playing dual roles in The Devil’s Fingers.

As our episode begins, the great maestro Chandell (Liberace) is at Wayne Manor working with Aunt Harriet on a performance that will be done as a Wayne Foundation benefit. Suddenly, three lovely ladies in Scottish attire show up to rob the joint. Later, Commissioner Gordon and Chief O’Hara show up to investigate. Gordon even picks up the phone and has the switchboard patch him into the bat-phone line…which Alfred runs off to the other room to answer. Problem is, Batman and Robin are unavailable. In actuality, Bruce is on a hunting trip and Dick is on a date. It’s up to the Gotham police to actually do some police work on their own.

Later, we learn that the three lovely crooks are in the employ of Chandell. He’s a bit of a criminal mastermind, but he also has a twin brother named Harry (also Liberace) who is a bit of a crooked gangster. It is Chandell’s goal to steal a fortune from the Wayne family in order to pay off his scummy brother and get him out of his hair for good. Meanwhile, the police step up their efforts to protect Chandell’s upcoming concert. Still, midway through the concert an explosion goes off in a nearby building (triggered by Chandell hitting a wrong chord) and the three lovelies show up once again to pull a robbery.

Luckily, Bruce is listening to the concert on his radio from his campsite. He becomes suspicious when he notices the wrong chord. He then uses a communicator hidden in fishing pole to contact Dick (using a radio hidden in a text book) and inform him that they must return to their crime fighting duties. When they go to investigate they find Chandell unconscious. Of course, Chandell is faking an attack he claims was perpetrated by his brother Harry. Batman and Robin then head for the abandoned factory (which Chandell gives them the address of) to find Harry. There they are greeted by the three beauties and some previously unseen henchmen. A fight breaks out and Harry manages to knock the Caped Crusaders out with a giant music roll. Next thing we know, Batman and Robin are on a conveyor belt about to be sent into a machine that perforates music rolls for player pianos. Cue the cliffhanger narration…

Liberace has got to be one of the strangest guest villain choices the makers of this series ever made. The man was certainly a charismatic figure, but I gotta admit he struggles a bit with both his roles. His delivery is a bit stilted and though he was certainly able to charm audiences when performing on stage, here he comes across as a bit…blah. He just doesn’t quite fit as the gangster Harry. Truth be told, it probably would’ve been better to not have Chandell and Harry be twins and just get another actor to play the gangster roll. Even as Chandell, though, Liberace struggles…which is odd since he’s essentially playing himself. 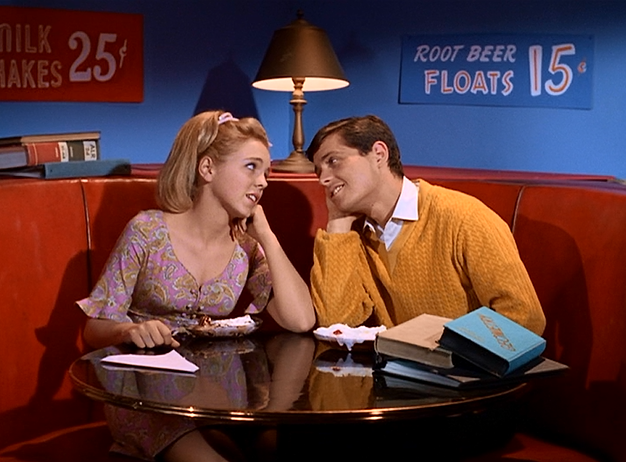 This episode does have one very unique trait, though, compared with the other episodes we’ve seen so far. That is that Batman and Robin are absent for over half of the episode. When we first see Bruce Wayne on his camping trip we are over 13 minutes into the episode. It takes several more minutes for Bruce and Dick to actually become the Caped Crusaders. The camping scene is fun, though. Only someone with the superior intellect of Bruce Wayne could possibly catch that just before the end of Danse Arab Chandell struck a C minor chord that does not belong. He then tells his camping “chum” to go check the muskrat traps…this is so he can call up his young ward on his fishing pole. Dick Grayson’s date with a girl he calls “Sal” is also a funny scene. Guess he must’ve given up on Susie the cheerleader from season one. When Dick sees a light flashing on one of his books he purposely dumps a banana split in the girl’s lap so he can get the privacy he needs to talk to Batman. The weirdest scene, though, is when Chandell seems to be attempting to seduce, of all people, Aunt Harriet! Robin informs us that Chandell is known as quite the ladies man. Ladies man…this is Liberace we’re talking about. Google it, folks.

So, while the episode is certainly unique in its structure and has some fun moments, so far our villain is a bit lacking. We’ll have to see if things improve in our next episode, The Dead Ringers. Same bat-time, same bat-channel (superhero).