When we last left Batman and Robin they were tied to poles with the Archer and his men about to run them through with jousting lances. There seems to be no way out! What will they do? Let’s find out in today’s episode, Walk the Straight and Narrow.

The escape ends up being quite simple, actually. Right at last moment Batman turns to Robin and says, “The Bat-springs, now!” Then they kick their heels and bounce straight up off the poles courtesy of springs in their shoes (and the hidden wires which are all too obvious when watching on new technology like DVD’s). Archer ends up escaping, though, with Batman reassuring Robin that they will catch the villain soon enough.

Now the Archer’s plans continue to move forward. It seems that Alan Dale, the head of the Wayne Foundation, is working with the Archer so the crook can steal a large sum of money which is intended for distribution to Gotham’s needy citizens. The villains pull a heist on the armored car, but after the smoke clears all the money seems to be left alone. Plans move forward for the ceremony to present the money to the needy…but there is one problem. Both Bruce Wayne and Batman are expected to be in attendance. Luckily, Bruce has an idea which involves Alfred donning the cape and cowl to pose as Batman from a safe distance. The butler even uses the bat speech imitator to impersonate Batman’s voice. In the middle of the ceremony, though, it is discovered that the Archer did, in fact, steal the money and replace it all with counterfeit bills

Somehow, in a way I still don’t fully understand, Batman figures out that Archer is hiding out on a boat. So, the dynamic duo jump aboard the Batboat (which had made its debut in the Batman movie a few months earlier) and head out to sea. Once they hop on board Archer’s ship, a pirate-style sword battle breaks out with our heroes victorious in the end.

This episode is coming off the heels of a disappointing part one of the story. This episode is a bit of an improvement. However, it has some big problems in the story department. As I said earlier, I’m completely lost on how Batman figures out Archer’s whereabouts. Plus, like in the last episode, Art Carney’s butchering of old English is still a bit of an annoyance in this episode. It does, however, mean that we still get the strange exclamations during the final battle…”Whack-eth” and “Clank-est” and so on. 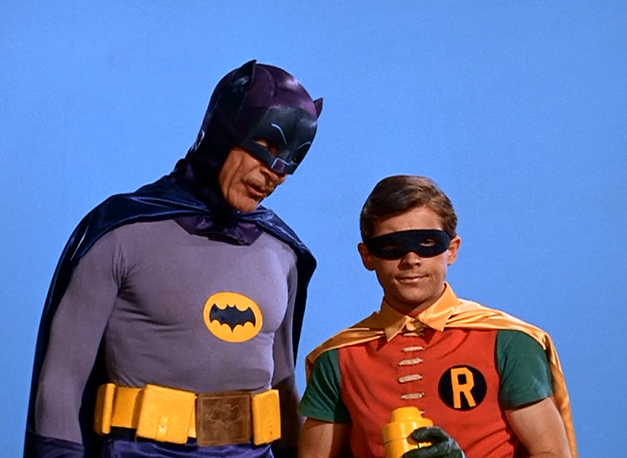 Where this episode does a bit better than its predecessor is in some fun laugh moments…starting with the cliffhanger escape. Springs in their shoes! Brilliant! I also absolutely loved Alfred dressing up as Batman! Not only is Alfred considerably taller and scrawnier than the Caped Crusader, he also has a moustache. At one point when Gordon needs to talk to Batman (really Alfred) he stands off at a distance and claims that he has a cold and doesn’t want to spread the infection. Gordon tells Robin to make sure Batman gets some relaxation and eats all his vegetables. Maybe the funniest moment of the episode, though, is when a female driver gets upset over the fact that Batman is always speeding around town in his Batmobile. A cop then informs her that Batman is the safest drive he has ever seen and that in his off hours Batman lectures on traffic safety for driving classes. “When pursuing criminals he endangers his life to protect yours and mine!” All I can say is God bless Batman!

Another highlight of this episode is Robert Cornthwaite as Alan Dale, head of the Wayne Foundation. The guy has such an odd and unenthusiastic way of speaking that he comes across as a real weasel. He makes a bigger impression than the main villain does, which almost never happens on this show.

Next time, though, we get the return of a more iconic Batman villain. She made one appearance in season one, and after being played by a different actress in the movie, Catwoman is back…and played by Julie Newmar once again. Join us next time for Hot Off the Griddle. Same bat-time, same bat-channel (superhero).