This week is not only a key episode but also one which sadly marks the end of the line for one of the cast, as Angel embark on a campaign of torment against the Scoobies, while at the same time Jenny believes that she may have found a way to restore his soul.

While Angel since losing his soul has been for the last few episodes making up for lost time carrying out various schemes with Spike and Drusilla, this week however he really steps things up by taking on a creepy stalker vibe tormenting Buffy and Scoobies with hand drawn pictures of them sleeping and turning Willow’s fish into a necklace, who strangely doesn’t notice them missing when she feeding an obviously empty fish tank. There is also an attempt to add to his creepy vibe, by having him reel off moody monologues as a voice over as he watches Buffy at the Bronze or her reeling from one his tricks, though all these generally did was come off as more of an irritancy while making me wonder if this is where the inspiration for the angst ridden vampires (and seemingly everyone else) in “Twilight” came from

It’s equally worth noting that this is an episode which is driven more by the drama than the action scenes, which are left for the showdown at the finale, which while a brave move for a series so driven by its action really works here, especially when the focus of the episode is on providing the turning point for Buffy so that she can finally take out Angel. Something she has held back from until now due to the lingering feelings she has for him, let alone a belief that she could find a way for him to remember who he was when he still had a soul. 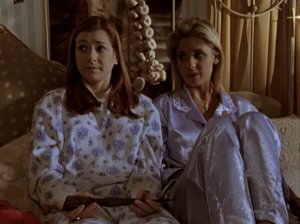 On whole this episode marks the pivotal moment for the series with the Scoobies taking action to defend themselves against Angel by discovering a way to uninvited Vampires from their homes, which essentially equates to nailing a lot of crucifix’s the window frames and hanging up some garlic, but as we soon discover it is certainly effective as Angel finds himself unable to enter Buffy’s house as she coldly remarks “Sorry Angel, changed the locks” as he left outside by the invisible force field once more protecting the house. The real defining moment of the episode comes at the price of Jenny being killed by Angel, whose death marks the real change in attitude for Buffy while refocusing her on her mission.

It’s worth noting that Jenny death is a permanent one which only seems the more important in these times were seemingly any character whose been killed off can suddenly show up again a couple of episodes down the line (see The Walking Dead / Arrow for big offenders of this trend) and it serves to remind us that no one is safe from the very real dangers the group find themselves facing on a weekly basis. At the same time it proved that Angel was truly evil and not just playing at it as might be hard to tell at times from the cheerful approach he takes to killing and torment. True Jenny is more of a supporting character and for a while it was going to be Oz who was killed instead only for Wheldon to decide there was more room to develop his character further, so hence the hatchet was left to fall on Jenny. We would of course get to find out in a later season just how well Willow deals with loss but we will discuss that more on a later review.

What makes her death only the more painful is the fact that we finally see signs of her wanting to repair her relationship with Giles, which since she got possessed had been very much on rocky ground, more so when it was also revealed that she was a spy for the gypsies who originally put the curse on Angel. This week though we see her going off on her own to find an “Orb of Thesulash” required to restore Angel’s soul which features a great scene of her buying it from a Gypsy novelty shop, whose authenticity is covered by the shop keeper covering his Jersey accent with a more stereotypical one to appease the tourists his shop attracts. Frustratingly it’s as she manages to get all the things she requires for the ritual that Angel shows up at the school and breaks her neck. The death is of course only added to by Giles returning home and thinking that he walking into a romantic encounter with Jenny only to instead be faced with her lifeless body in a pitch perfect scene played by Anthony Stewart Head with the soundtrack perfectly synching with the scene for devastating effect.

While I would have loved to have seen Giles discovering Jenny’s body marking a cliffhanger the showdown at the factory does provide a fitting release to such an emotional episode, with Giles showing himself no slouch as he goes after Angel by himself as he once more channels his badass side, while not content to just restrain him to attempting to stake Angel as he instead firebombs the factory, before laying into Angel with flaming baseball bat and for a while he certainly seems to be getting the upper hand over his much more powerful opponent. Luckily for him Buffy is quick to tag in when the fight swings in Angel’s favour and inturn giving us one of the best fight scenes of the series as the pair brawl in the inferno. 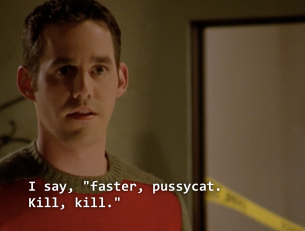 While Angel might be tormenting Buffy and the Scoobies, here we also find out that his new attitude is also getting to Spike, who clearly wishes Angel would go back to his tormented self especially when his actions constantly threaten to bring down Spike aswell, much less save him from being constantly the target of his jibes including the wonderfully tasteless

“Well, maybe next time I’ll bring you with me, Spike. Might be handy to have you around if I ever need a really good parking space.”

No doubt he was more than a little happy when Giles came looking to dust angel.

A great episode packed with memorable moments and one which really sets things in motion for the finale with the group becoming more focused in their mission, while the cracks really start to show between Spike and Angel, let alone the fact we get to see Giles be a badass which is never a bad thing and making it little surprise that this is one of Anthony Stewart Head’s favourites.

Next Episode: Killed By Death