Good morning pests and putrescence, Cryptkeeper Bubbawheat keeping things going right on track for day 20 of our 31 Days of Tales From the Crypt. Our next victim comes from Cinefessions where you go to confess all your cinema sins. Oops, sorry that’s something else not affiliated with Cinefessions, forget I said that. As I was saying, over at Cinefessions, Branden along with a few others discuss all types of film as well as have a podcast, and even talk some TV. But today he’s talking about one of the most terrifying episodes of Tales From the Crypt, at least it is if you work in the TV business, you might say it’s a Television Terror.

Tales from the Crypt was never a show I watched too much as a kid because we didn’t have HBO. My Uncle did, however, so whenever I spent the night over there I would do my best to stay up late to catch an episode or two. Seeing as I was only about five years old when this series was starting, though, I only ever watched a few episodes. I can’t really pinpoint any episodes that stand out to me from back then, but I imagine if I sat down and watched through the entire series, some would likely spark some memories. My love for anthology shows like this, though, started with the original Twilight Zone series. My sister and I would make certain to watch the all-day marathons SyFy would show on New Year’s Day. So even though I am not a cult follower of Tales from the Crypt, I appreciate it for what it is, and was excited to jump into Television Terror for the first time.

Television Terror stars Morton Downey Jr as Horton Rivers. If you don’t know the name, you should really check out the documentary on his life entitled Évocateur: The Morton Downey Jr Movie. To simplify it way too much, Downey was essentially the Jerry Springer of the 1980s. He was a loud, brass, chain-smoking, confrontational, and controversial talk show host that knew no bounds. So in Television Terror, he is essentially playing himself. In fact, Morton is the reason I picked this episode. The man is fascinating in every regard, and I really wanted to see how he would handle an acting role. Turns out he is fantastic, even if he was only asked to play himself.

This episode follows talk show host Rivers as he is filming a live ghost hunt at an abandoned house where, just five years earlier, a woman was butchering old men for their social security money. He and his one-man film crew enter the house, and start hearing strange sounds while on a commercial break. Once back from the break, the cameras catch doors slamming, blood coming from rooms, and much more. The network likes what they see as ratings skyrocket, forcing Horton to stay in the house until it is too late.

Horton is a piece of shit, made evident by the fact that his girlfriend, Sam, hates him with a passion. In fact, Sam is the one that makes the call to keep Horton in the house, resulting in his untimely demise. That said, it’s not terribly upsetting to watch the final shots in Television Terror, which hurts the effectiveness of the episode overall.

Speaking of the finale, what surprised me most about this episode is that it played out exactly as one would expect a haunted house episode to go. We meet the cast, they enter the house, things seem normal until they aren’t, the ghosts attack, and then people die. Though Tales from the Crypt episodes are known for their twists, I’d argue that the only twist here is the lack of a twist. I love that the episode went as far as killing both of the men who enter the house, though, and their death scenes were pretty satisfying. 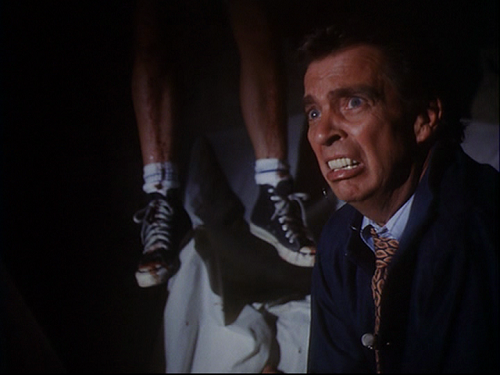 Without a ton of Tales from the Crypt episodes under my belt, it’s difficult to compare and contrast to the rest of the series, but even so, Television Terror was a lot more predictable than I expected. I loved watching Morton Downey Jr. play himself as a ghost hunter, but would have loved for it to build to something bigger, or be more surprising. If you’re not already a fan of the series, this episode isn’t the place to start, but it’s a solid horror episode, and much creepier than virtually any other anthology episodes I’ve ever seen in the past.

Television Terror gets 3 out of 5 stars.