There is no comic book villain that rivals the Joker. Since he was first introduced just over 75 years ago, no other comic book villain is seen as being as evil and sadistic as the clown prince of crime. However, the first appearance of the character off the pages of the comics was on the 1966 Batman series, which is, at its heart, a comedy. Brought to life by the one and only Cesar Romero, it’s time for the Joker’s debut in The Joker’s Wild. 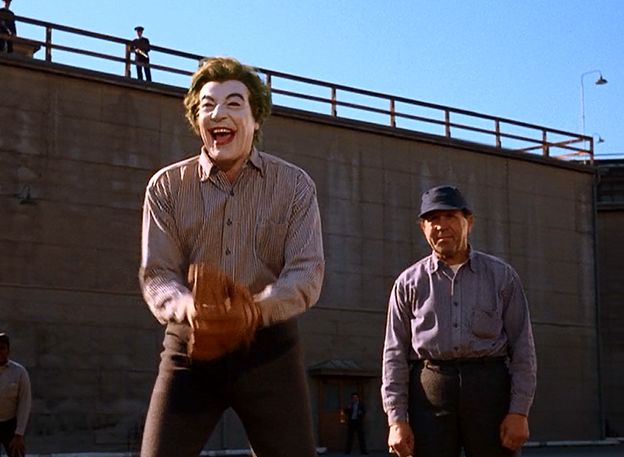 Our story begins at Gotham State Penitentiary where part of the rehabilitation process includes a prisoner’s softball league. The Joker, behind bars for his previous crimes, happens to be the star pitcher for one of the teams. He’s pitching up quite a storm when the ball is switched for a trick exploding ball. When the batter connects, the ball bursts into a huge cloud of white smoke. When it clears, we see that a giant spring has emerged from the pitcher’s mound, sending the Joker sailing over the wall. 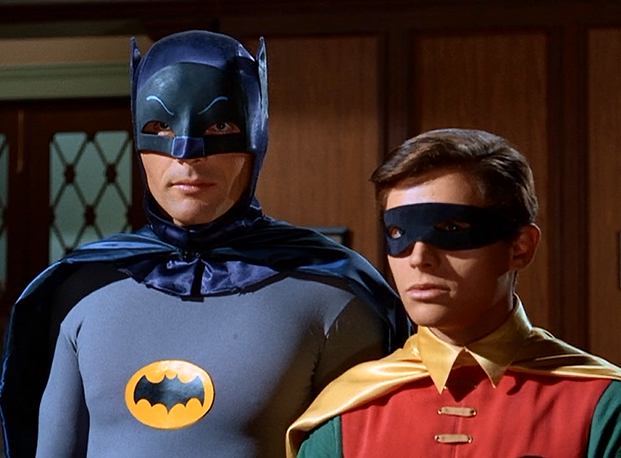 Of course, a clue is found on the scene – a bust of the Joker. The Caped Crusaders deduce that this clue points to a museum…or a hall of fame. It just so happens that the Gotham Museum is currently hosting a comedians hall of fame exhibit. The museum also houses a collection of priceless jewels that the Joker would love to get his hands on. It turns out that the Joker and his men are already inside the museum, hiding in the statues depicting various comedy greats. Batman and Robin show up mid heist and the series’ first part 1 mass fist fight ensues. The Dynamic Duo are captured briefly by the Joker’s men, but Batman pulls a mini smoke bomb from his utility belt which distracts the goons long enough for him to free himself. Determined to never suffer such embarrassment again, Joker creates his own utility belt to assist in his next showdown with Batman. 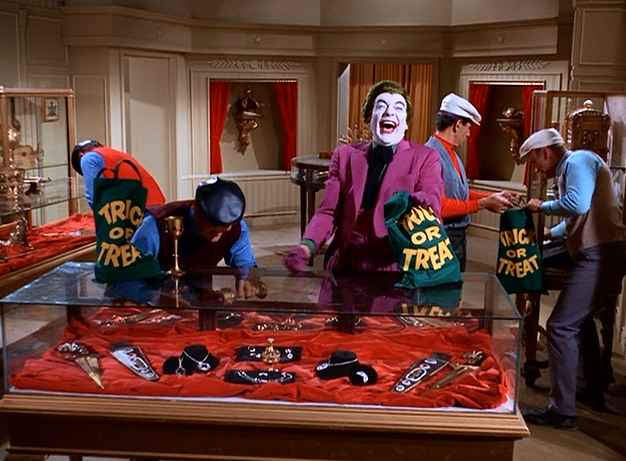 Another clue to the Joker’s plans arrives at Commissioner Gordon’s office soon thereafter – a doll of a circus clown. There is no hidden writing on the doll, but Batman soon figures out that this must point to the upcoming TV broadcast of the Gotham City Opera Company’s production of Pagliacci. It turns out that the star singer is, in fact, the Joker in disguise. He uses some sneezing powder to distract our heroes as his men subdue them. Now…the villain announces on live TV that he plans to unmask Batman and Robin for all the world to see. Cue the narrator…

Cliffhanger Text:
Could this mean curtains??
Will the identities of our Dynamic Duo be revealed to the whole world??
Is this the end of their career as crimefighters??
Can they avert disaster??
Answers…tomorrow night!
Same time, same channel!

(Note: The narrator actually says “Same Bat-time, same Bat-channel” though the text does not reflect it.) 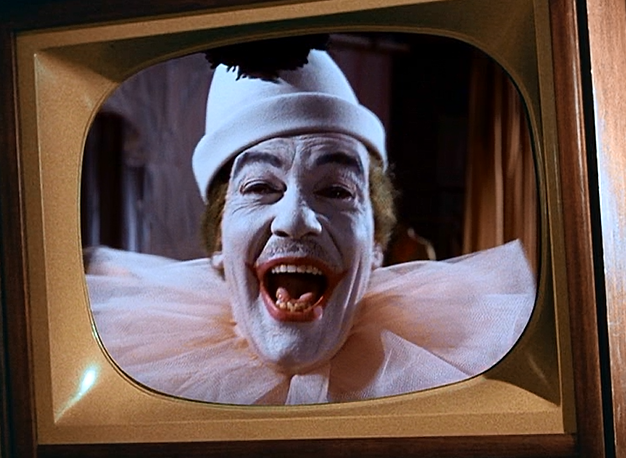 I fear that in recent years Romero’s depiction of the Joker has, at times, gotten a bad rap. In light of the performances by Jack Nicholson and Heath Ledger, some have come to categorize Romero’s Joker as a cackling buffoon. Nothing could be further from the truth. While this Joker is more comedic in nature, he still has a truly sinister streak. I dare say that Romero’s classic Joker laugh is far more haunting than either Nicholson’s or Ledger’s. In this episode specifically, the Pagliacci sequence comes across as a quite creepy. For much of the scene, Romero wears a latex clown mask which is just plain ghoulish. Then when it is quickly removed to show his gleeful but evil face, while still wearing that puffy white clown outfit, it’s quite striking. It is worth noting, also, that the mask Romero wears in this sequence is very similar to the mask that Heath Ledger wears in the opening sequence of The Dark Knight. I like to believe that this was both Ledger and director Christopher Nolan’s way of giving a salute to Romero’s version of the character.

As for our heroes, this episode has a number of great moments that just continue to establish the personalities of these characters. In the opening scenes, before the opening titles roll, there is a great moment where Dick Grayson is struggling through his piano lessons with Aunt Harriet and wondering out loud why he should even bother with this stuff. Bruce Wayne, of course, explains that music is important…one the best hopes for our realization of the brotherhood of man. Deep, Bruce, deep. There’s also a fun moment where the Caped Crusades pull up to the museum to try and foil the joker, but then realize that they’ve parked in a no parking zone. Batman returns to the Batmobile to move it before an officer tells him that it’s ok, and removes the sign so that no one thinks Batman is a callous violator of parking laws.

All in all this is fantastic debut for the Joker…and there’s still more to come. Join us next time for part II…Batman is Riled. That’s next week…same Bat-time, same Bat-channel (superhero).