It’s quite the unplanned coincidence that the same week that Bat-Mite #1 is released by the new DC You, I review the first appearance of Bat-Mite in Brave and the Bold. This imp from the 5th dimension has a ton of potential for this series, but the question is will he be used to his fullest, or seem like a gimmick.

In the Teaser, the somewhat under appreciated villain Catman is auctioning off a rare Sumatran Tiger to group of people who apparently eat rare Sumatran tigers. Batman shows up in the jungle to stop the illicit auction and Catman releases the tiger on our hero. Luckily for the caped crusader, his trusty animal companion, Ace the Bat-Hound is present to combat the tiger and save the day. 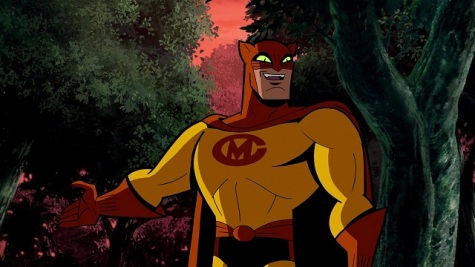 The story proper opens with Batman stopping some street level gangsters from robbing a bank, when a mysterious voice declares that it is too easy and not exciting enough. Magically more thugs appear as well as machine guns. Batman successfully subdues the upgraded threat, when the bad guys are mysteriously transformed into ninjas and a katana battle ensues. The disembodied voice reveals his identity by transporting Batman to a roof top where he is greeted by the diminutive Bat-Mite. Batman, unimpressed, swings away but finds himself unable to lose the imp. Bat-Mite explains he’s from the fifth dimension and is there to ensure Batman takes his place as the one true hero. Bat-Mite uses his magic to trigger a string of costume changes for the Dark Knight (include the nipple enhanced Schumaker costume) before returning him to his typical appearance. Bat-Mite decides to give Batman a true challenge and summons Gorilla Grodd, but then transforms him into Solomon Grundy, and Shaggy Man. At Batman’s suggestion, Bat-Mite turns Shaggy Man into Calendar Man, who Batman convinces to take a dive. Bat-Mite becomes convinced that the ensuing action is over the top, so he travels to the 5th dimension equivalent of San Diego Comic Con to poll the Bat fans in attendance about the situation. Batman suggests that Bat-Mite go back to his home dimension and let him fight in peace so he doesn’t waste his abilities in pointless battle. He offers an autographed Batarang to clinch the deal and Bat-Mite disappears. Returning to the Batcave, he commiserates with Ace about having to deal with the weird little creep. However, Bat-Mite reveals he’s Ace in disguise. Offended, he teleports Batman to an alien landscape where flying saucers, monsters, and robots, attack. Batman tells Bat-Mite to stop but Bat-Mite decides that Batman will be his toy. Batman refuses to play and tells the imp to be Batman if he thinks it’s so easy. Bat-Mite is soon overwhelmed and admits his imagination is running away with him. Batman leaps into battle and takes out the villains. Inspired by his hero’s example, Bat-Mite concentrates and defeats the remaining villains and restores everything to normal. He apologizes to Batman, admitting he’s a failure in a playsuit. Batman tells him he should be proud of his powers and Bat-Mite thanks him. He departs and Batman finds himself back in the Batcave. In the epilogue we see that Bat-Mite has now become infatuated with Green Arrow, and as the episode ends we see the classic Looney Tunes closing logo with Bat-Mite taking the spot normally occupied by Porky Pig and exclaiming “ That’s all folks!” 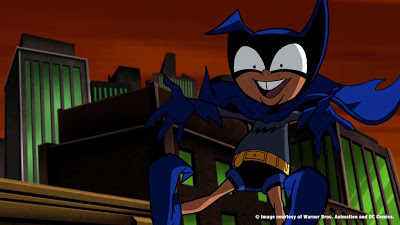 There are a couple of behind the scenes things to mention with this episode. I think the first thing I would like to address is the voice of Bat-Mite, Paul Reubens. I really like Reubens, and I think the actor best known by his character Pee Wee Herman was a great choice for the imp, but I think it took some courage on behalf of Warner Bros. to cast him in a (sort of) children’s show given the legal problems he’s had in the past (none of which are exactly wholesome). The choice paid off, the character was performed expertly, and became an important part of the future of the series. I was also excited to see that this episode was written by Paul Dini, the most important and accomplished writer of the DCU. This is the first episode he has written for this series, and though it does stand out from the previous episodes, I don’t think it had any of the magic he routinely conjured for Batman the Animated Series or Justice league unlimited. I understand that this episode wanted to call on the WB heritage of the Looney Tunes, but I think it was just a little too looney for my taste. Overall, though I did appreciate the introduction of one of my two favorite 5th dimension imps into the Brave and the Bold universe I ultimately feel like this episode could be best described as a disappointment. Don’t worry Bat-Mite fans, he will return, and the result will be superior.

To learn more about Bat-Mite, listen to Heroes & Villains ep. 49