Before I get too far into this week’s episode I do have some good news. If you haven’t already heard on Twitter or via other entertainment news outlets, iZombie has officially been picked up for a second season on the CW. But back to this week’s episode that involves a lot of sex and pop culture references, even though I don’t watch it I quite liked the Game of Thrones reference and loved the Fight Club one. There is a lot of forward momentum for several of the characters in the show as relationships change and get intermingled, all while having Liv on the brains of a radio sex therapist.

One of the most surprising arcs in this show lately has been Major. He has gone through such a complete shift that makes total sense within the context of the show. He originally started out as guy perfect, but his driven nature has caused him to go down the zombie rabbit hole and come out looking like he’s been having a rough time at Tyler Durden’s place. Even though Liv’s not quite ready to tell him the truth, he’s getting ever closer and is suffering the consequences for it. I wouldn’t be surprised at all if Major doesn’t survive this season, but I do think that he will play an instrumental part in bringing Blaine down.

What did throw me for a bit of a loop was when Ravi got bit by the newly created zombie rat through his chain mail gloves. Personally, I don’t think that Ravi is going to become a zombie himself, probably explained by the differences in physiology between the rat and humans. While he found the right concoction to create a zombie rat, I think the rat strain won’t be communicable to humans in the same way. It was also nice to see a different side of Ravi as he turns his own attentions to Peyton while Liv is too busy psychoanalyzing him and worried that Peyton will dump him like a side of rotten beef. 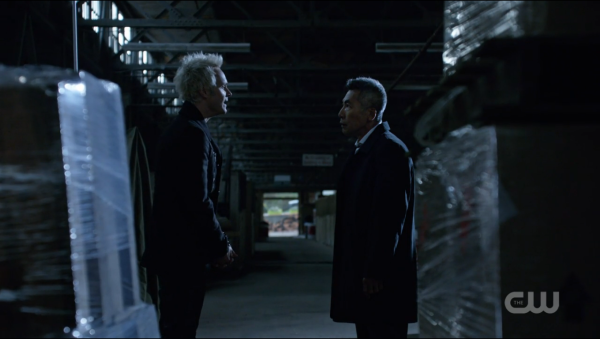 There’s a reason why I haven’t gotten to the brains of the week yet, and that’s because it was again one of the weaker parts of the episode. While the lady shock jock hasn’t been done too often in these kinds of shows, the Howard Stern style shock jock has been done to death. And the psychoanalytical nature of how she analyzed everyone in her life didn’t come off as all that funny, or all that insightful, though I will say that Rose McIver handled it quite well. To wrap up the episode, there were a few very important moments, mostly all right at the end. But early on, we did get a bit with the police captain and Blaine that shows how he’s not working with Blaine by choice, but rather was likely turned zombie against his will and has no other ideas other than using Blaine’s brain service so he has to cover things up in the meantime. But at the end, we get a bit of a dark side to Lowell when Liv finds out that he wasn’t just a random zombie, but another victim of Blaine’s high end brain delivery scam, and he was just delivered a side order of Jerome’s brains. Really great moments like these are what make this show so good even when the case of the week isn’t anything special.