Jessica has done it again, for the third time some has died at her hand. First, it was Luke’s wife Reva, not her fault because she was being controlled. Next was snapping Kilgrave’s neck like a glow stick, a revenge tainted necessity to stop the madman. The final victim was a correctional officer defending his home until Jessica caved in his skull. Ok, maybe it wasn’t that simple, and neither is the way Jessica deals with the unexpected psychological ramifications. 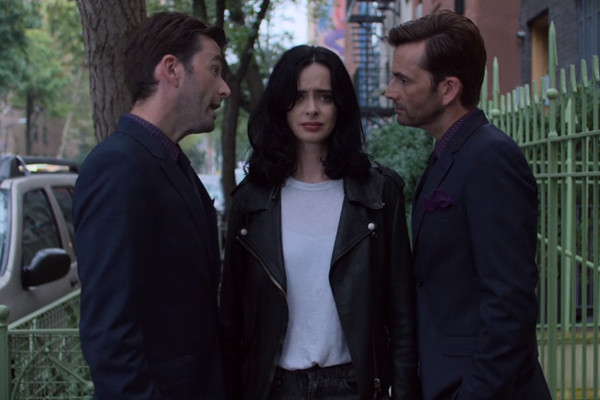 Fans of David Tennant should rejoice because the purple man is back. Jessica is grief-stricken by the latest death, and the reappearance of Kilgrave is the embodiment of her guilt and fear. Kilgrave gets to gleefully torment Jessica while trying to convince her that she is a murderer just like her mom. Jessica knows she is fighting with a delusion but she can’t control them and with Kilgrave popping up at the least opportune times.
This is probably my favorite episode so far this season. It is filled with creative mind-bending shots, and Tennant gives a fabulous performance. I think he is the only actor that was able to have fun while filming his scenes. Everyone else plays a character that that is morose, battling addiction or frightened, but not Tennant. He is the bright spot in a sea of despair that has been the first 23 episodes of this show. On another potential bright side, if Jessica can defeat Kilgrave again, she may be able to heal and grow in a meaningful way finally and not just in fits and starts.

This was also the episode officially featuring a cliff dive for Trish; the only thing left is to see how deep the ravine is. She has betrayed the team and is going to risk everything in her pursuit of powers and the quest to prove she is a good person. Unfortunately, she is doing the exact opposite in her efforts to become a hero. There isn’t much time left this season, and I hope it won’t be left on a cliffhanger, but Trish’s story screams of something that won’t be wrapped up in the next two episodes. We will find next week if Karl can give Trish everything she has dreamed.