In recent years, the lack of major films directed by women has become quite a hot-button issue. As we speak, Lady Bird director Greta Gerwig is only the fifth woman to ever be nominated for a best director Academy Award. However, though underrepresented, women have been directing movies since the dawn of film. One pioneer in the field was Ida Lupino. She had an over 40 year long career working as an actress and directed several films along the way. Today, she shows up in Gotham City as Dr. Cassandra Spellcraft in our penultimate episode, The Entrancing Dr. Cassandra. 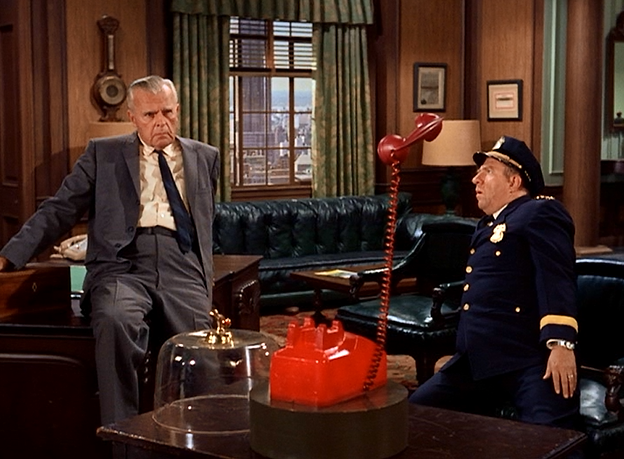 Our story begins as Dr. Cassandra and her husband Cabala (Howard Duff) set out to rob a bank. They use some special camouflage pills, which cause them to disappear, to lift a bag of cash without being seen. Though, they do beat up several of the customers and employees while they’re at it. When word reaches Commissioner Gordon, he and Chief O’Hara reach for the Batphone. However, they are surprised when they find themselves restrained by something unseen. Then, the Batphone receiver floats in mid air as the unseen Cassandra taunts Batman over the phone.

Now it seems that Cassandra’s plan is to release all of the arch villains in the Gotham penitentiary. She will then be the queen of a huge crime empire. First, she needs to get the Terrific Trio out of the way. So, she calls Commissioner Gordon and informs him that she plans on stealing the Mope Diamond from Spiffany’s. Of course, our heroes show up to stop her, but she blasts them with her Alvino Ray Gun. This emits a bit of a psychedelic light show before causing our heroes to basically become flat cardboard cutouts. She then has them delivered to Commissioner Gordon as she heads off to the prison to release all the bad guys. 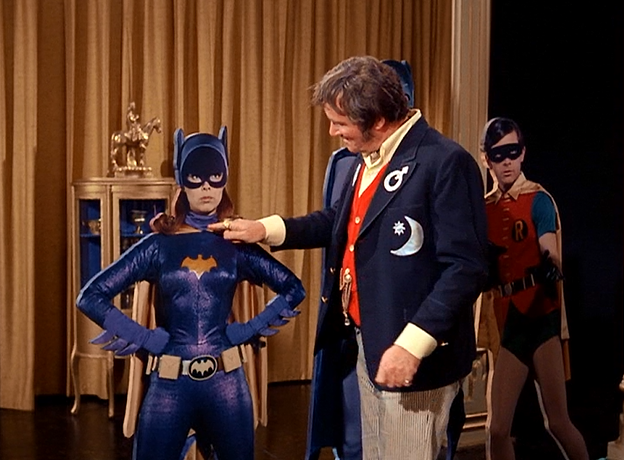 Gordon and O’Hara are at a loss for what to do to help our heroes. Then, O’Hara has the idea to use the Batphone to talk to the other voice that sometimes answers the phone…Alfred. Of course, they don’t know it’s Alfred, nor can the butler reveal his identity without putting the Caped Crusaders’ true identities in jeopardy. So, Alfred instructs Gordon to send the heroes to the post office, and he later picks them up in a not very effective disguise. He then takes them back to the batcave and restores them thanks to the Three-Dimensional Bat-Restorer. Meanwhile, Cassandra has managed to get into the prison and release none other than Joker, Catwoman, Penguin, Riddler, Egghead, and King Tut (though all played by stand ins as opposed to the usual celebrity guests).

Now with our heroes restored, they set out to defeat Cassandra and Cabala. Using the Special Escaped Arch Criminal Bat-locator on the Batcomputer, they locate where Cassandra and the arch villains are hiding. Of course, when the heroes show up for the fight, the baddies all take a dose of the camouflage pills. So, our heroes start being slapped around by unseen foes. However, they hit upon an idea to disorient the baddies as well by knocking out the lights. We then get a fight that is nothing but a dark screen interrupted by the occasional “Sock!” and “Zap!” When all is said and done, everyone is hauled back to prison. 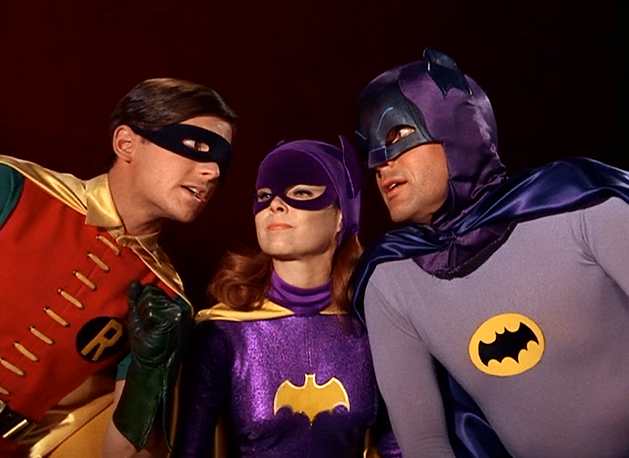 Though we’re just a step away from the end of the series, and the final season has honestly been a bit of a let-down, this episode proves that the show still has a little magic left in it. As we’ve seen in the past, villains that were created for this show, as opposed to originating in the comics, are often a bit weak. However, Dr. Cassandra and Cabala are delightful. Ida Lupino absolutely steals the show with her take charge villainess. She’s clearly the one brains of the operation, while her hubby (who calls her “Doccy Baby”) is just along for the ride. A fun touch of both characters is that they speak in a weird beatnik inspired style. For example, when Cassandra lays out her plan to Cabala he responds by saying “Marv, just marv!” (as in Marvelous). They are a colorful pair of villains and it’s a bit of shame that they are such late arrivals on the series.

The best thing about Dr. Cassandra, though, is her weapon of choice…the Alvino Ray Gun. Making our heroes flat as pancakes is one of the loopiest things to have happened to the Caped Crusaders in the entire run of the series. I mean when the villains deliver the flattened heroes to Commissioner Gordon, they literally slide them under the door! Beat that! Oh, but Cassandra does try to beat that by releasing six of Gotham’s worst villains from prison. Now, some may not care for this sequence as it is painfully obvious that scabs are brought in to play these classic bad guys. In the scene that depicts Cassandra giving a speech to the villains, we only see the backs of their heads. For me though, it was fun to see these characters make one last appearance. Though there is something strange about the moment. For some reason the Catwoman stand-in is made to look like Julie Newmar’s version of the character as opposed to the Eartha Kitt incarnation who appeared during the rest of season three.

I really loved this episode. It’s such a relief to see the series on a bit of an upswing as we move toward the end. Which brings us to the teaser for next week’s episode. In an unusual move, the final scene does not feature the Caped Crusaders, rather Gordon and O’Hara. They show up at a place called Minerva’s Mineral Spa where they encounter Minerva herself, played by Zsa Zsa Gabor. Join us next time for the series finale, Minerva, Mayhem and Millionaires. Same bat-time, same bat-channel (superhero).