Over the course of the last two and half seasons, we have seen a few times where a famous role was recast. Remember last season we had the role of the Riddler briefly taken over by John Astin when Frank Gorshin was unavailable. We’ve also seen three different actors play the part of Mr. Freeze. But our episode today gives us what may be the biggest casting change the series ever saw. Julie Newmar originated the role of Catwoman on this series, and her performance is iconic. Just as iconic, though, is season three’s version of the character, taken over for a handful of episodes by the one and only Eartha Kitt. Here she is in Catwoman’s Dressed to Kill. 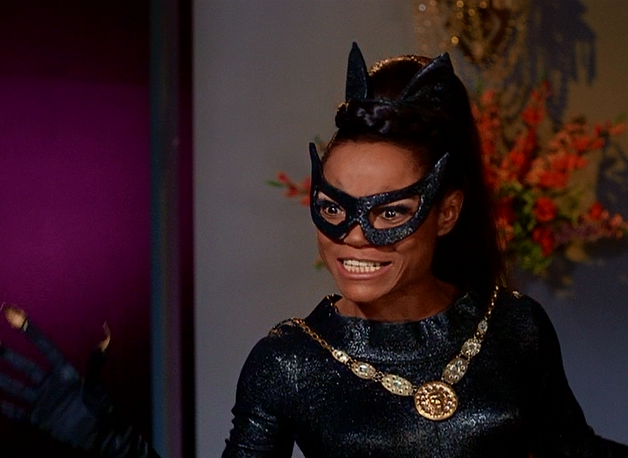 The trouble begins at a luncheon where Gotham’s Best Dressed Women are being honored. A special award is even given to Commissioner Gordon to pass on to Batgirl. The festivities are interrupted, though, when Catwoman shows up…demanding to be on the list of Best Dressed. She tosses a “hair-raising bomb” which causes all the ladies in the room to have hair more suited to a Bon Jovi music video than 1967 Gotham City. Of course, Gordon and O’Hara rush off to inform Batman.

It seems that Catwoman’s plan involves trying to lure the Caped Crusaders into her trap by capturing Batgirl. Then she plans to steal the Golden Fleece, a very valuable dress, which she will then sell back to the rightful owner, a royal who she is sure will play anything to get it back. Later, Catwoman invades a fashion show to steal some of the latest duds. Our heroes are on to her, though. They show up and fight with Catwoman’s men. Batgirl even shows up, too. There’s a problem, though, when Catwoman makes her escape through the models dressing room, which, of course, Batman and Robin can’t enter. Batgirl goes in, though, and quickly ends up captured by Catwoman. After waiting awhile, Batman and Robin venture in with their eyes covered, only to learn from the (fully dressed) models that Batgirl has been kidnapped.

Back at the Batcave, our heroes figure out that Catwoman is out to get the Golden Fleece. Meanwhile, Batgirl has been tied to a table and is about to be sliced up by a pattern cutting machine. Catwoman even calls Gordon to tell him Batgirl’s plight. Of course, this means that Batman can’t both save Batgirl and keep the Golden Fleece from being stolen. What on earth will he do? Luckily, Batman has Alfred. He sends the loyal butler (disguised as the world’s oldest hippie) to rescue Batgirl, while the Dynamic Duo head off to stop Catwoman. All three heroes eventually reunite for the final fight.

When it comes to season three episodes, this may be about as good as they come. If you’ve been reading these reviews for awhile, you’ve no doubt noticed that the stories have been getting sillier and sillier this season. This one is still a bit silly, but it feels a bit closer to a season two episode than what we’ve been seeing for the last several weeks. I actually really like the gimmick of Catwoman being obsessed with fashion in this story. It gives us an excuse to see some wild sixties fashions and hair, plus the pseudo cliffhanger involving an out-of-control pattern cutter is pretty darn good.

Really, though, this episode is all about one thing…Eartha Kitt. First, it’s worth pointing out that going from Julie Newmar to Eartha Kitt was a pretty bold and progressive move on the part of the show’s producers. Keep in mind, also, that this is coming at a time when racial tensions were high in our nation. Kitt’s Catwoman is very different from Newmar’s, though I would say they are equally iconic. Whereas Newmar was a bit more slinky, Kitt is far more sinister. She really plays up the cat-like qualities. She often uses her claws and hisses at her opponents. She also has that pur-r-r-r-r-r-r–fect pur that is perhaps the most memorable aspect of Kitt’s take on this character. Considering that we’re nearing the end of this iconic series, Kitt’s Catwoman is perhaps the last great villain that the series would see.

Of course, this episode has a few truly hilarious moments. The sequence where Batman and Robin are faced with the dilemma of having to enter a ladies’ dressing room is one for the ages. I also couldn’t resist the moment where Batman is strangely unable to maneuver his way out of a pretty flimsy looking net which Catwoman’s men toss over him and the Boy Wonder.

Though this episode does have a few of the hallmarks of a season three episode, it is a bit more of a return to form for the Caped Crusaders, helped in large part by the fantastic presence of Eartha Kitt. Now then, who do we get to see in our sneak peek of next week’s episode? Well, it seems a local news station is reporting on a disturbance…who do we see causing it? None other than Egghead and Olga back again. We’ll see what these two are up to next time in The Ogg Couple. Same bat-time, same bat-channel (superhero)