Episode Title: The Wail of the Siren
Original Airdate: September 28, 1968

At the end of our last episode of Batman, a new villain called the Siren (Joan Collins) had made her way to Commissioner Gordon’s office to use her ability to put men under a trance with an extreme high note on Gotham’s top cop. Well our episode today picks up exactly where the last one left off. Let’s jump in with The Wail of the Siren.

With Gordon now under her spell, Siren launches her plot to gain power. There are two key things she desires: Bruce Wayne’s millions, and to know the true identity of Batman and Robin. She figures with these things there is no stopping her. So, she orders Gordon to call Batman and arrange for a meeting at a neutral location of some sort. Gordon suggests the apartment of his daughter, Barbara. Of course, Batman and Robin dutifully show up, but Gordon does not. He and the Siren are down in the parking garage so that the Commissioner can hide in the trunk of the Batmobile. It only takes a short time for the Caped Crusaders to realize that something is up and head off…not knowing Gordon is in the trunk. Unknown to everybody, Barbara changes into Batgirl to get on the case, as well. She manages to find Siren’s lair and overhear her plot. 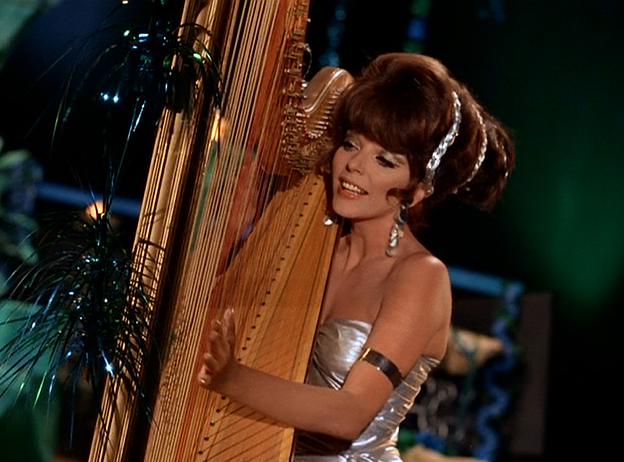 Later, back at the Batcave, Gordon emerges from the trunk while the Dynamic Duo are having milk and sandwiches up in Wayne Manor. Gordon does, however, spot Alfred doing some dusting in the Batcave, and figures out the connection. Always quick thinking, Alfred grabs some Bat Sleep to knock Gordon out. However, just after Alfred brings Gordon to Bruce and Dick, Bruce gets a strange phone call from the Siren. She uses her hypnotic powers to order Bruce to meet with her. He then wanders off like a zombie, much to the confusion of Alfred and Dick. Just as Dick is about to go after him, Batgirl calls on the Batphone. The two decide to meet at the Wayne Foundation Building, which is where Bruce is headed.

It doesn’t take much convincing for Bruce to sign over all of the Wayne fortune to the Siren. Luckily, Robin and Batgirl show up…but, now that Siren owns the building she informs them they are trespassing and kicks them out. The two heroes leave, but Robin manages to drop a bugging device as he walks out. This causes him to overhear Siren tell Bruce to go up to the roof and jump off. So, it’s up to Batgirl and Robin to get up there and save Bruce…not to mention fight off Siren’s gang. 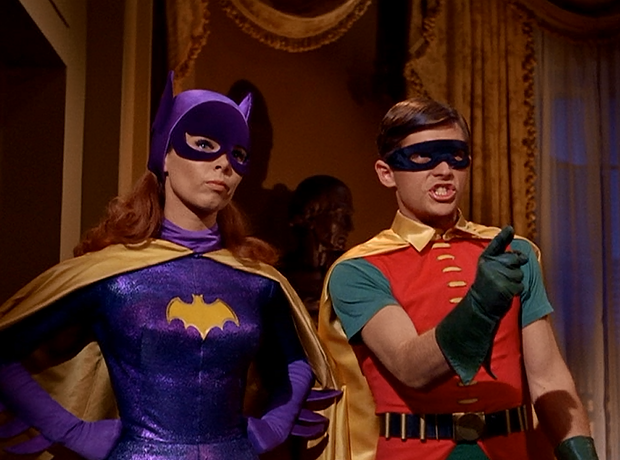 Where the first two episodes were enjoyable, but not without some problems, this episode is really really good. Joan Collins makes a great villain! Sexy, yes…but a much different approach than what we saw out of Julie Newmar and Carolyn Jones in the previous seasons. Sadly, the Siren was a one-and-done baddie for this season. I would’ve liked to see her return…though, maybe not the high-pitched sound she uses to hypnotize her victims. I was watching this episode on my laptop with headphones on, and my wife and daughter were both able to hear the sound. They thought some kind of alarm was going off in the house. One interesting thing about the Siren, though, is that unlike Catwoman or Marsha, Queen of Diamonds, she doesn’t seem to be in any way infatuated with Batman. She’s just after money and power…she doesn’t care about Bat Love.

A nice surprise with this episode was that it gives Neil Hamilton (Commissioner Gordon) the chance to show his stuff a bit. Too often Gordon shows up just at the beginning and end of the episodes and doesn’t get a whole lot to do. Here he really factors into the plot. Plus, Hamilton does a great job when he’s supposed to be under Siren’s spell. His scene with Alfred in the Batcave, as he gradually figures out Batman’s true identity is really fun. Fear not, though, when the episode wraps up, Gordon has no memory of his time in the Batcave…or of his discovery.

Of course, we have reveal of the next villain in the epilogue segment. None other than Burgess Meredith will return as the Penguin, but with a new accomplice. One Lola Lasagne will make her debut, played by singer and actress Ethel Merman. Oh, and speaking of music, would you believe that Batgirl gets her own theme song in this episode? As Barbara Gordon changes into Batgirl, the following little ditty is belted out:

Not quite as iconic as the Batman theme…but still kinda catchy. We’ll see if it shows up again next time in The Sport of Penguins. Same bat-time, same bat-channel (superhero).