Tonight’s episode of Iron Fist was once again light on action until the final 10 minutes when Danny confronts Harold for all of his past and current misdeeds. The episode features some good performances and the standout was Harold, who is very believable as an unstable psychopath.

I can’t help but wonder how Joy has not caught on to his level of insanity and depravity yet, but she will. Harold believes he is free of The Hand and that soon Danny will be out of his hair, for good this time. With the two things that could stop him out of the way Harold is free to take back Rand and to run his world the way he sees fit. Which means thousands if not millions of people suffering to line his pockets and make him feel like a big man. Who knows, it may have all been avoided if the company was named the Meachum Corporation, the fact that he worked for Rand and receiving less credit may have been what broke him. 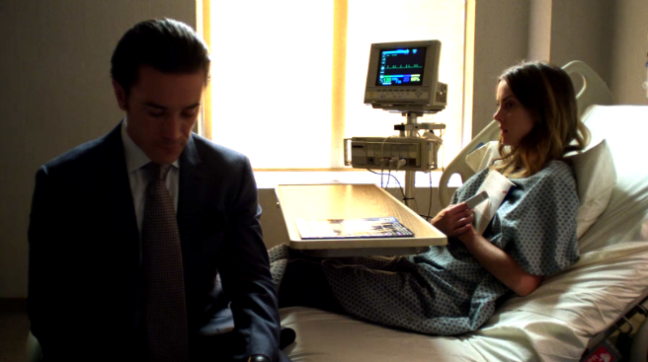 Joy is playing the typical rich white lady in many respects. She has a few clutching her pearl moments and at other times she believes she is owed better by those around her and the world at large. I enjoy the actress but as the character has evolved and become less involved over the length of the season I have turned on Joy. She started off as a good person struggling with where he life was going and I liked her much more than Ward. Now after everything that has happened if forced to choose I am on team Ward. He has at least accepted how messed up his life has been and that he needs to make a change.

Danny is finally confronted with the fact that he is suffering from survivor’s guilt. That ever since the plane crash that claimed the lives of his parents and left him alone, he has been angry at the world and at himself for the last 15 years. He didn’t leave K’un-lun to find himself or to reclaim what was rightfully his, he left to exact revenge on the people that killed his parents. Luckily for him he has multiple targets to put I his cross-hairs who knows what it would have done to his psyche if it had just been a normal accident. When The Defenders come together I can’t help but wonder what kind of person Danny will be. Is the show set just days, weeks or months after the events of Iron Fist season one, I fear that if it is not set far enough in the future that we will get the same Danny especially after the stinger of tonight’s episode?

After nearly 3 months we have reached the conclusion of Marvel’s Iron Fist and the table is set for this summer’s Defenders miniseries. We have our four heroes who have all interacted with Claire and a few that are connected to Hogarth to unite the team. The real question is what event will require them all to come together and who will lead the team. This series as a whole is my second favorite of the five Netflix and Marvel collaborations to date, behind only Jessica Jones. It did not have the highs or lows of Luke Cage, it isn’t as forgettable as season one of Daredevil and not as jumbled as Daredevil season 2. It was a solid 6.5 or 7 out of 10 the entire season with plenty of room for improvement and I am excited to see season 2 and how the story and its characters evolve.