We’ve seen a bunch of ridiculous villains on this series so far, but this week we’ve got something pretty wacky. Eye creatures…I get, evil frogs…to be expected, but today’s monster is like some sort of cross between a kaiju film and an episode of Antiques Roadshow. Let’s see what happens in today’s episode, Wheel of Misfortune.

As we begin, the students of Angel Grove High (which is pretty much just the Power Rangers and Bulk & Skull) are rehearsing for a production of Rumpelstiltskin. They are even using Kimberly’s grandmother’s antique spinning wheel in the production. Not a good idea, though, since Bulk promptly breaks the precious item during rehearsal. This really bums Kimberly out, but even worse is when she and Tommy return to the school to try and fix it but find the antique missing. Turns out, it was stolen by Rita who has her own plans for it. 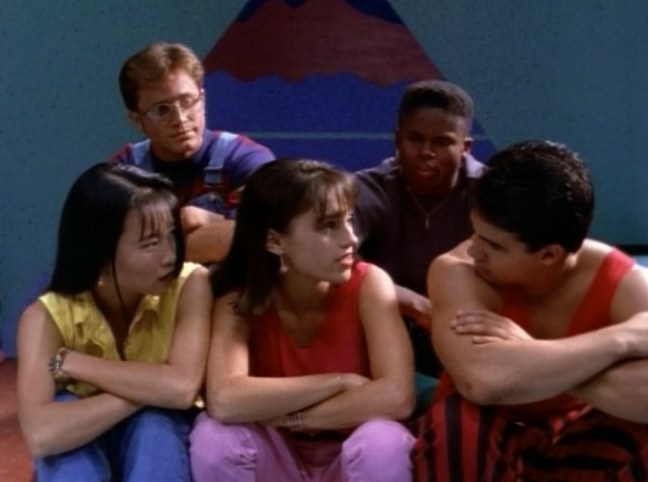 The villain’s plan begins with getting Tommy out of the way. Strangely, a gang of putties is able to overpower him and tie him to a tree. As for the other rangers, they launch into action when Goldar and Scorpina are sent down to cause trouble. Rita quickly makes them grow and the rangers retaliate with some Zord action. Things don’t go well, though without Tommy to help them out. Meanwhile, back at the park, Tommy has gradually been working his way out of the ropes. Once he takes care of the putties, he morphs and joins the others. Now, with Tommy and the Dragon Zord on hand, our heroes are able to take care of Goldar and Scorpina. Not so fast, though. Next the giant spinning wheel comes sailing through the sky. The rangers form the Mega Zord, but still have trouble. So, they determine that they must summon Titanis (the brontosaurus zord from last time) so they can form the Ultra Zord. We hardly get to see what this thing looks like before it blasts the spinning wheel to smithereens. Fear not, though, it returns to its regular form and ends up back at the school in time for the play.

I’m at a loss for words on this one. A monster spinning wheel!? Let me assure my loyal readers, it’s as silly as it sounds. This thing spins through the air shooting out sparkles, looking about as intimidating as some of the cheap fireworks you can buy at Walgreens for the Fourth of July. We do also get Goldar and Scorpina tearing things up, so that’s a little better than just having to fight a monster wheel. I was confused, though, with Scorpina this time. When Rita sends her down to Angel Grove she’s in hot chick form, but when she turns giant sized she changes into monster form. Her monster form, by the way, looks nothing like a scorpion. I guess I wanted Attack of the 50 Foot Woman instead of another rubber monster. 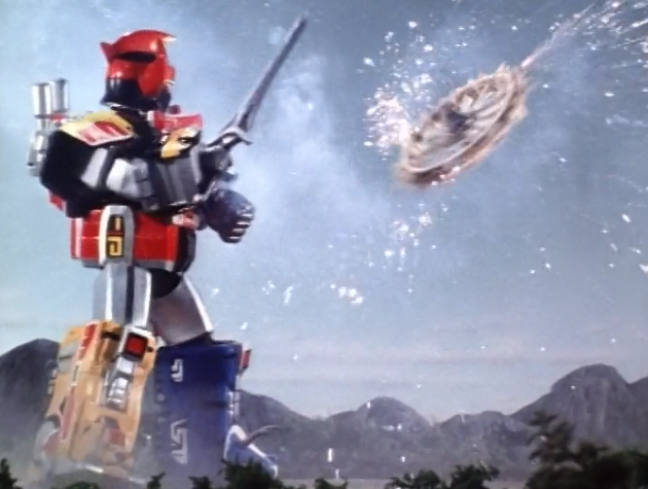 The addition of the Ultra Zord in this episode is a bit hum-drum. It was briefly mentioned that this Titanis thing could help the rangers out when it was introduced last time, but we really didn’t get much in the way of details. Now, it suddenly pops up again and we really don’t get a chance to see why it’s so special. It hooks up with the other zords, a bunch of missiles fly, and that’s that. It all happens so fast that I wasn’t exactly sure what had happened.

The highlight of this episode is actually Paul Schrier getting some fun moments as Bulk. He is cast in the role of Rumpelstiltskin for the school play and adds what he calls “a touch of the 90’s” to the role. He actually fits the part pretty well. Schrier and Amy Jo Johnson (as Kimberly playing the miller’s daughter) have some funny interplay in both the rehearsal and final performance scenes that bookend this episode.

Well, hopefully next time we do a bit better than evil antiques. We’ll find out with the first episode of a two-parter…Island of Illusion Part 1.