So far in the Batman series I can only think of one villain who is regularly referred to by his real name by those around him. That villain is Jervis Tetch, aka the Mad Hatter. Actor David Wayne played the character for one story arc in the first season and is now back in today’s episode, the first of 1967, The Contaminated Cowl. 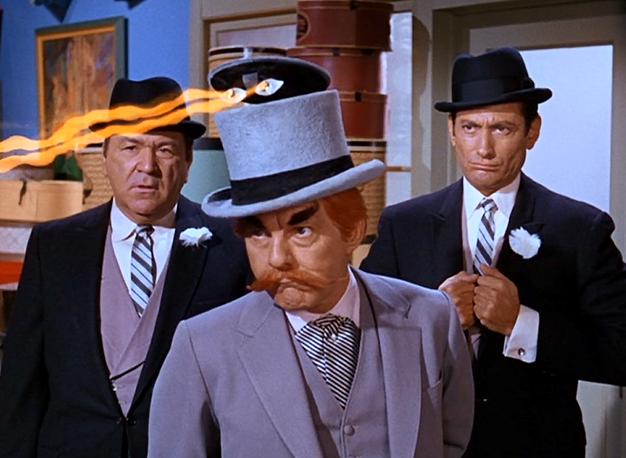 Our story begins at Bon Bon’s Box Boutique, a Gotham City store that sells only…boxes. The unique store is paid a visit by Mad Hatter and his men who promptly request 700 empty hat boxes. When the store owner asks, “cash or charge?” the hypnotic eyes pop out of his hat and zap the poor woman. The baddies have no trouble making off with the goods. Of course, it’s obvious to Commissioner Gordon who is responsible, so the Caped Crusaders are called into action. 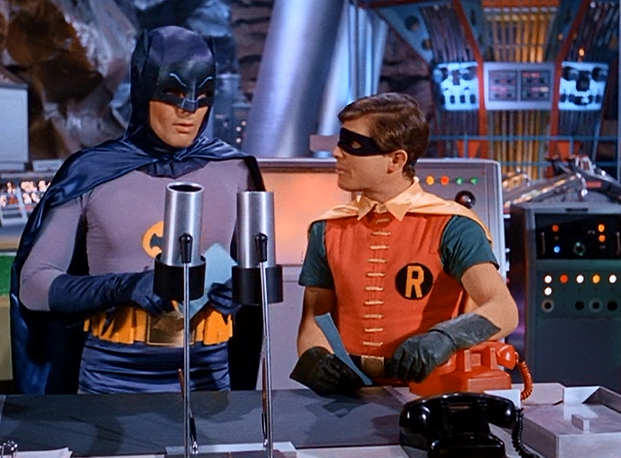 Our heroes use the Batcomputer to find out where Mad Hatter will strike next. It turns out that there is a Charity Headdress Ball hosted by Haddie Hatfield. She is the owner of the famous Hatfield Ruby which must be what Mad Hatter is after. Actually, though, he has just one thing on his mind, finally getting Batman’s cowl for his collection. The villain shows up at the ball disguised as the Three-tailed Pasha of Panchagora. Right about the same time, Batman and Robin arrive, having scaled the side of the building. They try to not be noticed, but Batman accidentally bumps a service tray, which alerts Mad Hatter’s men to their presence, before they duck behind the buffet table. Just as Mad Hatter nabs the ruby from the hat of Hattie Hatfield, the Dynamic Duo leap out. A fight ensues, but the villain hits Batman with a radioactive spray before escaping. This turns Batman’s cowl bright pink!! 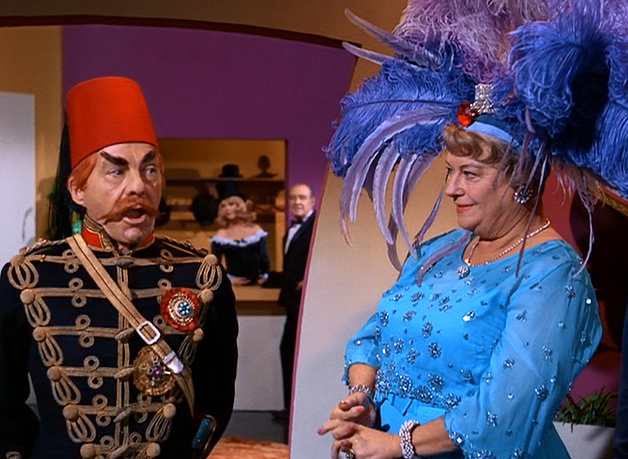 With all of Batman’s other cowls being cleaned, he needs to find a way to put things back to normal. He ends up enlisting the services of a nuclear scientist who has recently received a sizable check from the Wayne Foundation. However, this is just what Mad Hatter planned. The baddies follow our heroes to the Gotham City Atomic Energy Laboratory and then pose as workers. When Batman goes behind a screen to remove his cowl, he unwittingly hands it off to Mad Hatter disguised in a radiation suit. Robin tries to stop the villain but is unsuccessful. Then Batman emerges IN A FRESH COWL!?! “I’ll explain later,” says Batman…but he never does. Long story short, our heroes pursue but end up trapped inside a giant X-Ray device. Cue the cliffhanger narration…

Cliffhanger Narration:
Is this to be believed??
In our scientific age??
First Batman’s cowl radio-activated!!
And now the Caped Crusaders fluoroscoped forever??
Keep framed to their framework!!
Tomorrow!
Same bat-time, same bat-channel 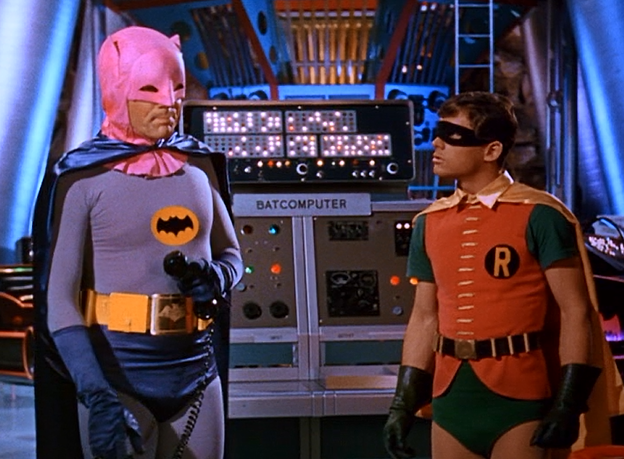 After a couple of truly dismal episodes it’s great to see a return to goofy fun on this show. Mad Hatter may not be as extreme of a villain as the Joker or the Riddler, but he’s still wonderfully outlandish. I love David Wayne’s prim and proper approach to the character, along with his bright red, curled up moustache, not to mention the extreme eyebrows and slightly strange glint in his eye. Wayne does a great job of making his role bizarre without going over-the-top. Plus, the weird little hypno-eyes that pop out of the top of his hat are just plain cooky. The icing on the cake is the weird BROING noise that we hear every time they spring up. I also really like that Mad Hatter’s scheme has nothing to do with some big crime, world domination, or whatever…he just wants Batman’s cowl for his collection. 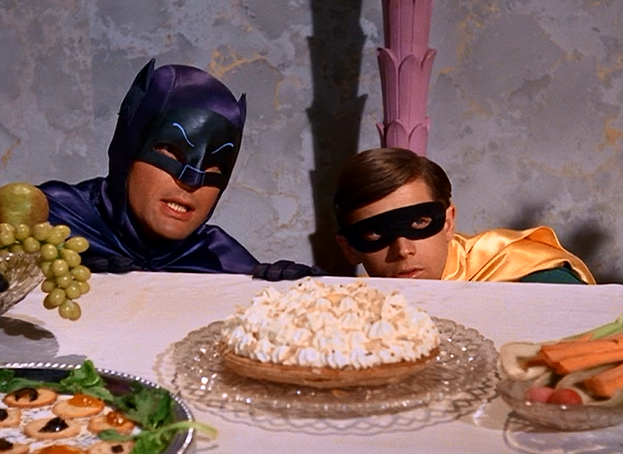 One of this episode’s great charms, though, is the gimmick of having Batman’s cowl turn pink. First, I can’t quite get over how the so-called radioactive spray is not any big deal for our heroes. I mean, Batman got sprayed in the face with this stuff and all he has to worry about is that now his costume clashes. Oh, he took an Anti Radioactive Bat Pill, that makes it all ok. Dude’s lucky his face didn’t start melting off!

The pink cowl isn’t the only bit of silliness in this episode, though. After all, even with Batman’s incredible powers of deduction, not to mention his physical prowess, we see him give himself away to the bad guys by stumbling into a serving tray as if he were Jerry Lewis. This is followed up by the sight of Batman and Robin hiding behind the relish tray on the buffet table. This then leads into a punch out with the bad guys that deteriorates into a food fight! Priceless! 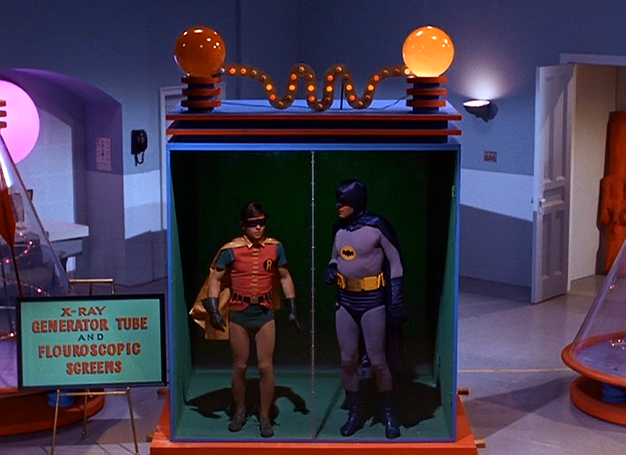 One of the few downsides of this episode, though, is the cliffhanger. I don’t exactly understand what is about to happen to our heroes inside this giant X-Ray machine. I guess we’ll find out next time in The Mad Hatter Runs Afoul. Same bat-time, same bat-channel (superhero).