Well folks, sorry for keeping you in suspense for an extra week on our latest Batman cliffhanger. If you remember, it’s a doozy. Penguin has nabbed Chief O’Hara and has him locked in a trunk which he intends to drop into a pool. Batman and Robin are on the way, but Penguin’s men stand ready to shower the Dynamic Duo with bullets before shoving them in the drink as well. Oh, and did I mention the pool is electrified? Let’s find out what happens in The Bird’s Last Jest. 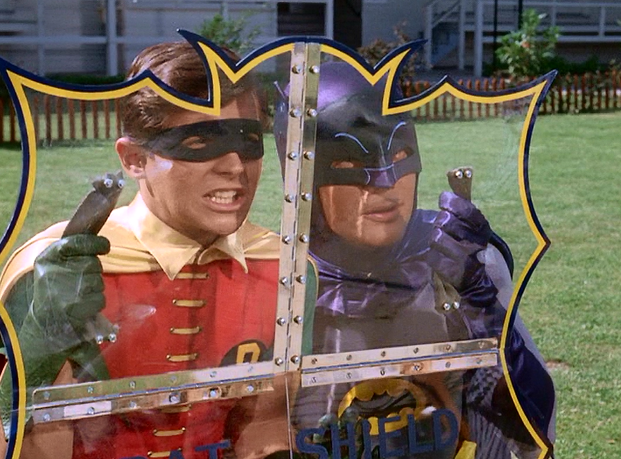 Our heroes arrive on the scene and spot the trunk containing O’Hara perched atop a water slide. The trunk gets pushed in, but Batman quickly realizes it’s a trap. Our heroes whip out the Bat Shield while they figure out what to do. Batman uses an exploding Bat Pellet to keep Penguin from switching the power on to electrify the pool. They then advance toward the electric cables. Using a Bat Inverser, Batman reverse the polarity. So, when Penguin turns on the power, the trunk containing O’Hara is launched out of the pool. Soon the bad guys run out of bullets (which Batman, of course, has been counting) and are arrested.

This would seem to be the end, but Penguin has more tricks up his sleeve…er flipper. At the trial, which has Batman serving as prosecutor, the Penguin turns the tables. He accuses Batman of violating his rights as a law-breaking citizen when (in the previous episode) he was not locked up for stealing Aunt Harriet’s jewelry. Strangely the judge ends up agreeing with the waddling crook and the case is dismissed.

Batman now has to try and catch Penguin in the midst of his forgery scheme in order to get him behind bars where he belongs. Batman paints some false fingerprints on Alfred and sends him off to Penguin’s restaurant posing as Quillpen Quirch, a noted forger. Of course, when Penguin check the fingerprints, they are a match. However, in the course of chatting with “Quillpen,” Penguin recognizes Alfred as Bruce Wayne’s butler. He then decides to hold Alfred for ransom. Now get ready for this…he seals Alfred into a giant pie and carts him off to Wayne Manor. He then demands 1 million dollars from Bruce. This leads to Bruce and Dick having to do some tricky back and forth to assume their heroic identities without leading on to Penguin. After the obligatory fight, Alfred is freed and Pengy and his men get carted off to jail.

Though this episode has a few fun moments, it does run out of steam about midway through. We start with a wonderfully silly resolution to the cliffhanger and then go into the court room scene, which is also kind of looney. Not only was it a kick to see that Batman is apparently licensed to practice law, but the Penguin’s slick wordplay to convince the judge of his case is also a lot of fun. But then we go into Batman’s extremely convoluted plot to try and catch Penguin red-handed. I guess part of the problem is that logic doesn’t just go out the window…it climbs up on the roof and commits suicide. I mean, Penguin suddenly recognizes that Alfred works for Bruce Wayne and remembers having dealt with him before. So what does he conclude: that Wayne and a bunch of other bankers are plotting against him!?!!? Even a Kardashian would’ve started to think that maybe Bruce Wayne is Batman after ten…fifteen minutes or so! 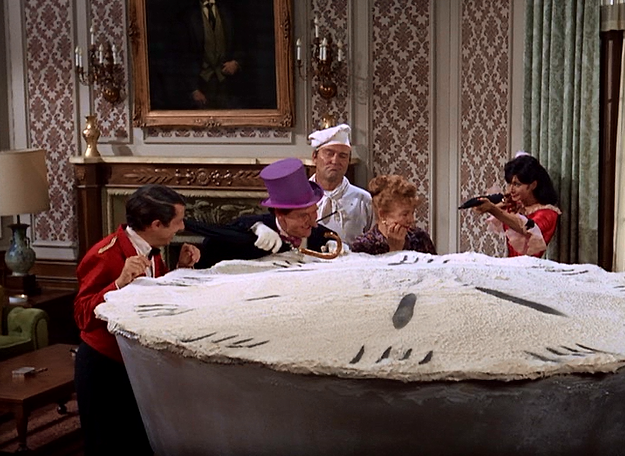 The whole Alfred plot, though, does provide one of this episode’s crazier moments. After Batman and Robin rush back to the Batcave/Wayne Manor to rescue Alfred from being baked into a pie they have to switch costumes several times. Of course, the Automatic Costume Changer that the Batpoles are equipped with work in reverse when they pull the right switch. The classic moment, though, is when our heroes switch back into their capes and cowls and cover their tracks by shouting the following exchange:

Batman: Look, Dick! Good gravy, Dick! Coming through that window!
Robin: Why Bruce, isn’t that Batman and Robin, Bruce?
Batman: It certainly is, Dick.
Robin: Go out and get ‘em Batman and Robin! We’ll stay here so as not to be in you way!

These lines are delivered in a very stilted fashion. Batman may be capable of many things, but I dare say winning a Screen Actors Guild Award is not one of them.

This episode mainly gets by on the strength of Burgess Meredith, who is always a treat as the Penguin. I just wish his scheme had been a bit stronger this time around. Alfred being baked into a pie just wasn’t a very strong plot device for me…and I like pie! We’ll see if things get better next time as Julie Newmar returns as Catwoman in The Cat’s Meow. Same bat time, same bat channel (superhero)