With only one episode left this season of AMC’s Preacher, everyone is shown preparing in his or her own way for Jesse’s climatic sermon next Sunday. Some people like Odin spend their time as if it was any other week, which apparently includes window side whiskey and an office fight club. His story is seemingly over, he will play a part in next week’s episode but it will most likely be one of pure reaction. His biggest role this season has already played out where he shows Jesse a loophole in his ability. That people of different beliefs may not be affected in the way he would anticipate.

The second smallest storyline belongs to Tulip who has been caring for Cassidy ever since his sun exposure to prove what he is to Jesse. With Jesse on the run, she knows that eventually they will meet up and leave the tiny town together, so she must settle the score with Carlos on her own before Sunday. Tulip is very devoted to the people she cares for, her uncle who somehow managed to survive while she was gone, Cassidy her newest friend and Jesse the boy who went from best friend to brother to the love of her life. Ruth Negga has grown on me as the season has progressed and Tulip has become more predictable. She is smart, beautiful and a flat out lunatic, no one would want to be Carlos right now.

The rest of the three main characters have an intersecting story with Emily and Jesse finding out how Cassidy is doing and them trying to make her feel better in different ways. Jesse’s reaction is probably exactly what we all expected it to be going into this episode. They have become friends who are both gifted and cursed by extraordinary abilities and friends who should probably consider joining AA together. Like a good Catholic Jesse feels extremely guilty about letting Cassidy be burned by the sun and first wants to apologize then play his part in his friend’s recovery. Cassidy continues to be my favorite character, and the acting of Joe Gilgun is fantastic. His interaction with Jesse this episode runs the gamut of emotions; he displays fear, anger, shame, hope and joy all in one scene. Cassidy has been on the run alone for who knows how long and between Jesse and Tulip, he finally has people who accept him and in their own way understand and relate to him even though they are not vampires. The most surprising and upsetting plot line was Emily’s story, after being called over to help Cassidy by Tulip everything that happens seems to be out of character. The sweet, naïve and lovelorn mother of three takes vampires, animal sacrifices and murder in stride without batting an eyelash. It is hard to tell if her spirit is broken after recent events or if she believes this will make her Jesse’s type so she is willing to descend into his world.

The most interesting and worst part of the episode for me was the journey of the angels, and the reveal of how the cowboy connects to the main storyline. In a series of events that for someone who didn’t read the comic felt like it could have been in any of the Harry Potter novels of movies, the angels take a bus to Hell. In a bit of stretching with the directors artistic license we see the conclusion of the cowboy’s story, then see it again as a whole in real time, then repeatedly in increasing degrees of fast-forwarding. It turns out that this entire story was taking place in hell and their version of hell is living out the worst period of your life for eternity. 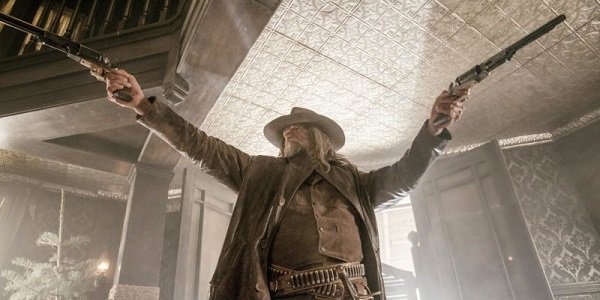 The angels instead of showing up to take Eugene home decide to take the cowboy back to earth so he can kill Jesse in an interesting twist. I guess after last week and Jesse’s flip-flopping about is it or is it not God’s will for him to have Genesis they have giving up and just want him dead. In another interesting twist Fiore and Deblanc are not just partners in a job but also possibly partners in life. They are willing to break all of the rules to accomplish their goals and stay together. The fact that they may be gay isn’t an issue but I don’t know if I just missed it in previous episodes or if it just as out of the blue for no real reason as it felt to me. I am excited to see how far they are willing to go to stay together, to stop Jesse and get Genesis back before God knows the truth.