When we last left Gotham City, Batman and Robin had one by one captured Ma Parker and her family of villains. They’ve turned them over to the care of Warden Crichton at the prison, but little do they know that Ma has taken over control of the pen. Not only that, a bomb is wired to the engine of the Batmobile and will go off once our heroes hit 60 miles per hour. Let’s see what happens in this week’s episode, Ma Parker.

First, I’ll just say that I predicted the end of this cliffhanger when I watched part one. As Batman and Robin speed along, Robin suggests that they go a bit faster…but Batman points out that the speed limit is only 55. Then Batman gets curious about one of the “trustys” at the prison saying that the warden usually drives 70 on this road. Why would the warden do that? Batman leaps out, pops the hood, finds the bomb, and tosses it away. He then hurries back to the prison but finds that things seem normal, with Warden Crichton in control.

In reality, Ma Parker launches a crime wave…rallying the prisoners in the yard to her cause. During one bank job, the Caped Crusaders nearly nab the gang, but only get a piece of fabric as evidence. They then use their gadgets to determine that it’s part of a prison uniform. So…they head back to the prison, but are quickly apprehended by Ma and the kids. They are then strapped to the electric chairs (the prison apparently has two) and set for execution at midnight. When left alone, though, Batman is able to pull loose one of the wires and use it to tap out code on a transmitter on his utility belt, instructing Alfred to have Gotham City power turn off the electricity at 12. They then manage to free themselves, beat up the kids, and capture Ma. 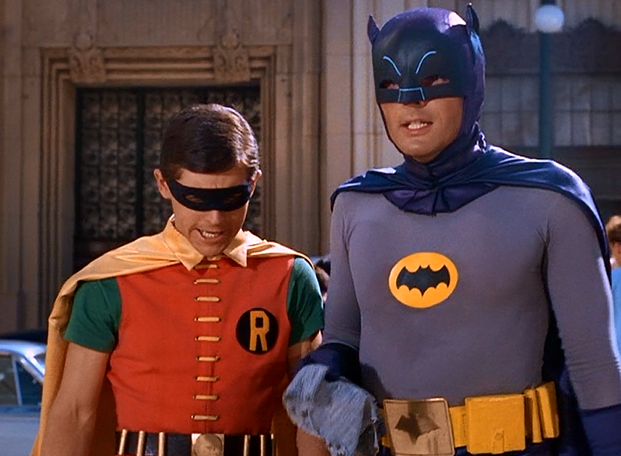 This episode is a fun follow up to last week’s entry. In general, the format of both of these episodes is quite different than other installments. It’s quite refreshing to have a different take on things. Once again, Shelley Winters is a lot of fun as Ma Parker. It’s actually somewhat believable that she would be able to take over the prison and rally all the criminals to her cause. She has great presence, a good grasp of comedy, and is even a bit intimidating.

One of the notable things about this episode is two big cameos by familiar faces. First is the return of another famous villain…Catwoman as portrayed by Julie Newmar. She appears in the prison yard as Ma gives her big speech to the other cons. Strangely, Catwoman gets to wear her normal outfit behind bars rather than the prison uniform that the rest of the inmates sport. She even still has her clawed gloves! She’s sharpening them when we first see her. Who needs a shank when you’ve got those gloves!? The other big cameo comes in the form of a prisoner disguised as a guard who greets our heroes with a shotgun when they come over the prison wall. The guard is played by Uncle Milty himself…Milton Berle. The guy has the opportunity to blow Batman’s head off, but then Batman reminds him then he only has 48 years left on his sentence. Uncle Milty figures he can wait it out.

Overall this is another strong episode featuring a villain original to the show. But next time we get a villain from the comics who only appears in this next two-part story. Walter Slezak plays Clock King in Clock King’s Crazy Crimes. Next week…same bat-time, same bat-channel (superhero).