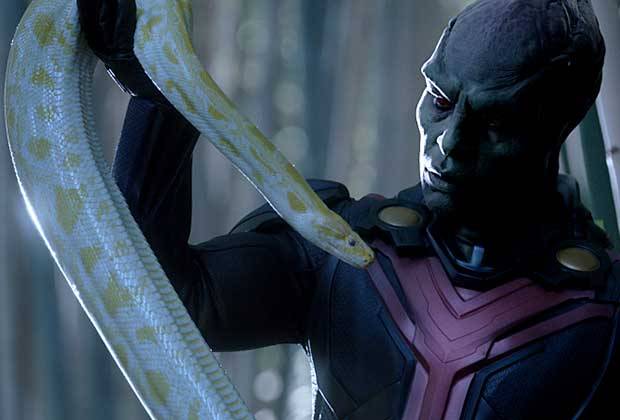 Repercussions from Hank Henshaw (David Harewood) revealing his true Martian form in the previous episode raise the stakes for not only Henshaw himself, but both Alex Danvers and Supergirl, as Colonel James Harper (Eddie MCClintock) engages in a witch-hunt to determine the depths of the alien’s deceit in working as Henshaw all this time. He is aided by Lucy Lane (Jenna Dewan-Tatum) for her knowledge of those involved, and following an interrogation of both J’onzz and Alex, determines that they will be taken to Project Cadmus, a sinister laboratory under the Government’s control where powers of those involved are used to try and make weapons for the US military – typically accessed via torture, or worse. Kara (Melissa Benoist), whose loyalty to both Henshaw and her sister runs deep, is appalled at the actions of both Harper and Lucy, and appeals to Lucy’s better nature in order to prevent her friends and allies from becoming Cadmus’ corpsicles.

Through a series of flashbacks, we’re finally given the backstory to J’onn J’onnz’s assumption of the persona of Henshaw, with brings back Alex and Kara’s father, Jeremiah Danvers (Dean Cain), previously glimpsed in the pilot episode, and how the previous Henshaw wasn’t exactly a nice dude. Aspects of xenophobia are rampant through the episode’s subtext, prescient considering where America is politically at the broadcast of this episode, and although the show doesn’t really nail this aspect of the plot as well as I’d like (maybe we’re all too weary of talking about it?) it’s there, bubbling away under the surface. Original Henshaw’s DEO was basically a paramilitary unit designed to “take down” alien incursions, without the jurisprudence of innocence before guilt. 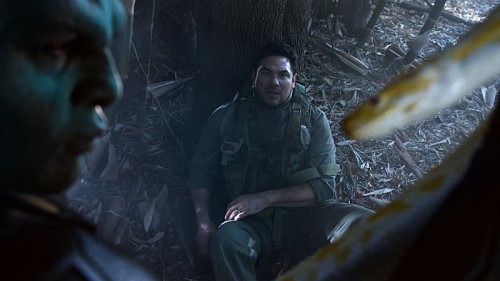 As was revealed many episodes ago, J’onn assumed the role of Hank Henshaw following the death of the real version in mysterious circumstances, as well as the death of Jeremiah Danvers at the same time. Exactly how that jigsaw fits together is finally revealed, and although not surprising, is still gripping. The scene with Dean Cain is a kinda stumbly one, never really landing the emotional import it desires, but functions well enough as an emotional throughline for the “present day” story of J’onn’s incarceration and his relationship to Alex and Kara.

For once in the show, though, Kara is largely left on the sidelines of the main plot. Standing around the DEO blindly hoping it’ll all turn out well, never once threatening to punch the crap out of Harper and let her sister go? Really? Kara seems resigned to whatever crime Harper cares to assert, and her iniquity during this period feels out of character, almost as if the writers had no real way of keeping her from just barging in and flying off with Hank and Alex under each arm; the episode’s “prison-break” finale is designed to correct that, I wager, but you have to wonder why it couldn’t have happened earlier, if it was going to happen at all. Instead, the central plot of the episode largely concerns Lucy Lane, who not only is the sidearm to Harper’s little interrogation party, but inevitably is let in on Kara’s little “secret” before the episode runs its length, as a way of reversing her apparent blindness to following orders in the face of obvious agenda-pushing.

The episode’s sub-arc involves Winn and his sorta-girlfriend Siobhan Smythe (Italia Ricci), whom long-time fans of DC will know eventually becomes Supergirl arch-nemesis Silver Banshee – well, that little link finally irons our the crinkles this episode, with a fairly meandering convolution of Smythe’s antagonism for Kara coming full circle. Ricci gives Smythe a sense of burdened humanity, a weighty affected sense of injustice that’ll no doubt roost in the rafters of revenge in episodes to come, but this sub-arc has been a long time coming for very little actual impact (thus far). I await Smythe’s redemption in future episodes.

“Manhunt” is brusquely written, strangely choppily acted, and feels like it’s one of those episodes hastily rewritten before shooting began. There’s a solid idea behind the plotting but the execution feels rushed, lacking cohesion and organic fluidity of the kind past episodes contained in spades. That said, it’s still enjoyable, and no doubt the myth-making at DC’s television unit will take some pride in what the episode reveals and sets-up for the series’ future.