There are movie people and then there are book people. I am definitely a movie guy, but my wife likes to fill her free time with books. She’s one of those people who has trouble enjoying certain films because they differ so much from the original book version. I have a feeling that’s the sort of person our villain in today’s episode of Batman is. It’s a character created for this series and portrayed by one of the biggest names to be credited as “Guest Villain.” Before he was Cornelius of the Planet of the Apes, Roddy McDowall showed up in Gotham as the Bookworm in today’s episode, The Bookworm Turns. 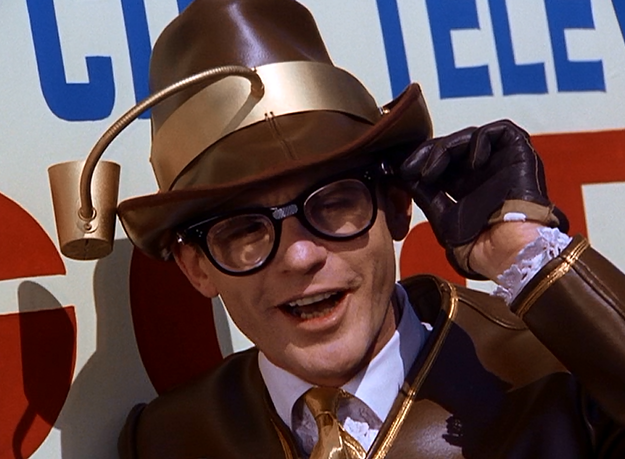 As our episode begins, Bruce Wayne and his ward Dick Grayson are watching the dedication of a new bridge on television. Suddenly, Dick spots a figure he recognizes as the Bookworm. Then they receive a huge shock when they see Commissioner Gordon gunned down on live TV. He falls from the bridge into the river below. There’s no need to wait for the batphone this time. Our heroes spring into action immediately.

However, a bigger surprise comes at City Hall a short time later when Gordon walks in unharmed. Though, he’s a bit frustrated for having been held for a long period of time by a cop who detained him for a parking infraction. The ticket was issued by Office A.S. Scarlett, badge #1887. Right away Batman recognizes that this is a reference to a Sherlock Holmes story, A Study in Scarlett published in 1887. A typical Bookworm joke. Then, the bomb detector in the Batmobile goes off. Thinking quick, Batman uses the ejector seat to shoot the bomb out of the vehicle. Upon investigation, they find that the bomb was in the form of a book…For Whom the Bell Tolls.

Back in the Batcave, Batman remembers that For Whom the Bell Tolls is a story about blowing up a bridge. The new bridge must be in danger. Our heroes head out but quickly get called by Gordon who sends them to an old warehouse. There they find a giant picture of the bridge being projected on a wall. You see, Bookworm “blew-up” the bridge. They use the batzooka to shoot the batrope so they can scale the building. From this vantage point they spot where the projector is…atop a Bookmobile. A sonic blast from the Batmobile sends Bookworm and his men running out of the van, and a fight ensues. The baddies make a run for it through a secret tunnel, but back in the bookmobile the Dynamic Duo find a hostage.,,a lovely lady, Lydia Limpett (Francine York). 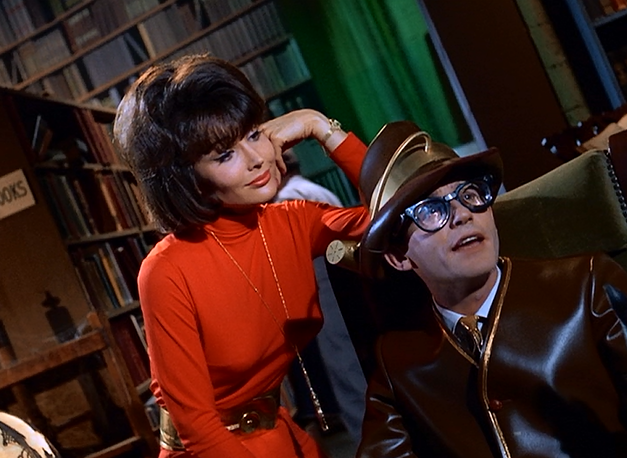 Batman suspects that she might be a part of Bookworm’s gang…and he’s right. He gasses her and hooks her up to a lie detector. She ends up in a bit of a trance and doesn’t realize Batman is questioning her. However, she doesn’t really know Bookworm’s plan, so she’s no help to our heroes. They put her back in the bookmobile but now she claims to know the plot…to steal the Declaration of Independance. Batman knows this is a lie, but he wants to spring Bookworm’s trap. He heads off to where the historic documents are kept, while Robin stays with Miss Limpett. However, she uses some knockout gas of her own and the next thing we know Robin is tied to the bell clapper in the clock tower, Big Benjamin. The sound will be intense enough to kill the Boy Wonder. Cue the cliffhanger narration…

I gotta say, this series has been knocking it out of the park with the last few original villains they’ve introduced. King Tut was loads of fun and now we get the bizarre and brainy Bookworm. I love his look! His suit and hat are supposed to be made out of old bookbindings. Plus he has these big thick Coke bottle glasses and large desk lamp attached to his hat! The best thing, though, is the way Roddy McDowall plays the part. Bookworm is supposedly a frustrated writer. He’s able to speed read and retain everything he reads…but he can’t come up with anything original. Any time someone suggest he write his own stories he flies into an explosive rage. It’s very unexpected that this somewhat unintimidating looking character would be one of the most manic villains we’ve seen yet. Not to mention the fact that the first part of his plot is one of the grimmest images we’ve seen on the show…Commissioner Gordon gunned down by a sniper and plummeting off a bridge.

Despite the dark beginning, as this episode progresses it has some laugh-out-loud funny moments. I completely lost it when the fight sequence was about to start. Bookworm’s men all surround the Caped Crusaders and just before the first punch is thrown Batman stops them. “Your glasses!” he exclaims. The crooks then obligingly take off their specks as Batman reminds Robin, “Never hit a man with glasses.” For what it’s worth, Joker tried to remind Batman of this rule in the 1989 Tim Burton film…Batman didn’t go for it.

This episode also features the first occurrence of a running gag that will pop up several more times throughout the series. It comes as Batman and Robin are scaling the side of a building with the bat rope. Suddenly, a window opens and a person begins to engage them in conversation. The person in the window is usually a celebrity cameo and this first one is none other than Jerry Lewis. He exclaims, “Are you Batman? Oh you must be ‘cause that’s Robin!” The scene is made even funnier when a few moments later Batman scolds Robin for not holding the batrope with two hands. 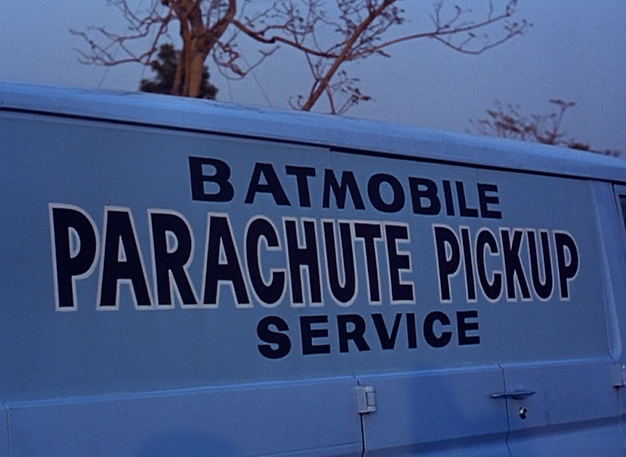 Another very funny moment comes when Batman and Robin utilize the Emergency Bat-turn Lever in the Batmobile to make a 180 and head the other direction. We’ve seen them do this before. A couple of parachutes pop out to help slow them down and they make the quick change of direction. But if you ever wondered what happens to those parachutes, we learn in this episode. Robin picks up the mobile batphone and calls for a parachute pickup. We then see a blue van with the words “Batmobile Parachute Pickup Service” painted on the side zoom off to, I assume, pickup the parachutes. So…apparently there is a guy who sits around in a blue van all day waiting for that moment when he has to go clean up after Batman. If I could sit and watch movies on my tablet all day while I wait…I’d take that job.

Perhaps Batman could get the parachute guy to help him save Robin…because right now, Robin is about to be clanged to death and Batman is headed the opposite direction. We’ll have to wait until next time to find out what happens in While Gotham City Burns. Same bat-time, same bat-channel (superhero).