There’s echoes of familiarity with Supergirl’s 14th televised episode, not of itself but of the wider DC mythology, as well as vague head-nods to pop-culture iconography. Amid the hurly-burly of this episode’s action sequences, the idea of what Supergirl stands for is tackled by both the writers and director Lexi Alexander, better known for her helming of Marvel’s awesomely brutal Punisher: War Zone opus, to a degree I felt underutilised the medium but succeeded in spite of its television budget.

One of the show’s most recent plot twists has had resident billionaire antagonist Maxwell Lord (Peter Facinelli) incarcerated deep in the bowels of the DEO, ostensibly to keep him from revealing to the world that Kara Danvers is really Supergirl – and by extension placing into jeopardy her entire family – and this issue comes to a head with the appropriately named “Truth, Justice And The American Way,” an episode dealing with the premise of incarceration. One of the crashed Fort Rozz guards, nicknamed Master Jailer (Jeff Branson) with a costume resembling Sauron from Lord Of The Rings (sorry, it’s all I could think about while watching – Peter Jackson’s residuals cheque better be in the mail, guys!) is recapturing escapees and executing them as a continuation of Alura Zor-El’s mandate to punish those who commit crimes. Master Jailer runs afoul of Supergirl when he tries to kidnap a low-level drug runner for execution, and at one point both Kara and the relatively innocent ex-prisoner before a knock-down battle between the Girl Of Steel and her captor proves an uneven match. 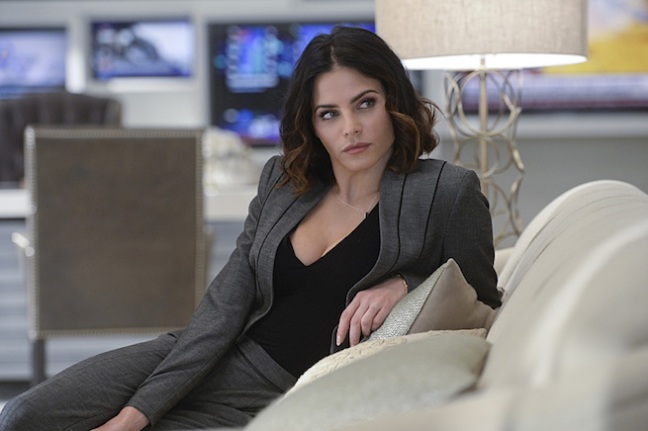 Jimmy Olsen’s continued deception of his fiancée, Lucy Lane (Jenna Dewan-Tatum) of his knowledge of both the DEO and Supergirl’s real identity also comes to a head, as he uses this plot device to convince Supergirl that keeping Lord restrained against his will, in spite of what he may or may not do if released, isn’t the superhero he wants Kara to be. Casual mentions of America’s much-despised Guantanamo Bay detention facility bring guilt-baggage by the truckload at that point, and the parallels between that and this episode’s underpinning subtext are presciently potent. Secondary to the main thrust of the episode is the arrival of a new “assistant” for Cat Grant (Calista Flockhart) in the form of Siobhan Smythe (Italia Ricci), an uppity, go-gett’em adversary for Kara’s position as Cat’s main confidant. DC regulars will appreciate that Siobhan Smythe (pron. Sha-VON) is the current human iteration of Superman nemesis Silver Banshee in the New 52 era, so one might expect this little glimmer of antagonism to rear it’s admittedly gorgeous head in episodes to come. As it stands, the competitive nature of Kara and Siobhan’s “administering” to Cat’s whims is appropriately reminiscent of The Devil Wears Prada, perhaps one of the more ironic sleight-of-hands this show has dealt during its run.

As with most of the post-hiatus episode run on Supergirl, the episode moves briskly – perhaps even moreso than usual – with several action sequences between Supergirl and the Jailer ratcheting up Lexi Alexander’s ability to create convincing action sequences on what is a comparative shoestring budget. Thankfully, the punches seem to land with convincing weight, although the ferocity of the fight sequences often become a product of editing rather than earnestly magnificent of their own design. Again, kudos to both Alexander and the actors for making things look as ferocious as they needed to be. The other subplot the episode has to cover is the recent killing of Kara’s Aunt, Astra (Laura Benanti) at the hands of Alex Danvers, although currently Kara believes Hank Henshaw (David Harewood) delivered the fatal blow. Harewood came this close to delivering the classic “person she needs to hate right now” a la Dark Knight, and I did curse at the show for not just nodding to the audience with the actual line, but the archetypal sense of protectionism Henshaw has to Alex’s relationship with Kara is redolent of many, many comic book plot-lines.

“Truth, Justice And The American Way” took on some pretty mighty narrative conceits and to the best of its ability conveyed their point with breathless precision, if not always depth and clarity. While I’d have liked to see Kara wrestle with the DEO’s illegitimate holding of Maxwell Lord a little further, or at least a lot better before now, the five minute nod to basic human rights, the pretence of restricting them based on what a person “might” do, and how that is resolved at a comic-book hero level, is at least given some credence. Short-thrifted, but still present. The episode juggles the burdensome demands of its multiple subplots with increasing difficulty, restricting James Olsen and Lucy Lane’s relationship entanglement to almost an afterthought, most of which occurs off-screen the audience is never privy to, and giving Peter Facinelli barely a few moments to register the teeth-gnashing, snarling caricature his character has become. Leastways I thought Maxwell Lord would provide some calm antagonism to go with the show’s frantic pace, but alas, Facinelli (and us) have been let down by his character morphing into a slimy, corrupt bastard all too quickly.

Supergirl continues its trend of upwards and onwards after a slippery start, and aside from a few minor fumbles the post-hiatus journey has remained incredibly fun. Although at some point, I truly hope they’ll actually show James being CatCo’s “top investigative photojournalist” – for somebody of that stature, Olson does spend a lot of time at work sitting around cleaning his camera.