So last time we left Buffy and the Scoobies things were left in a mixture of celebration and sadness as Buffy stopped Sunnydale and the world being sucked into hell at the cost of sending Angel to hell instead. The season ending with Buffy on a bus and seemingly leaving Sunnydale and her responsibilities as the slayer behind her. Now re-joining them at the start of season 3, several months have now passed and Buffy is now living in Los Angeles working and disguising herself by working as a waitress under her middle name Anne. Meanwhile Willow, Xander and Oz are attempting to pick up Buffy’s slayer duties by continuing patrols with mixed results as they manage to lose as many vampires as they slay.

Fear not though as this show hasn’t turned into Buffy the waitress with her having to deal with folks refusing to tip or being sexually harassed by jackass customers, as despite leaving Sunnydale trouble still has a way of finding her as she soon finds herself helping fellow runaway Lily whose boyfriend mysteriously disappeared only to reappear as an old man 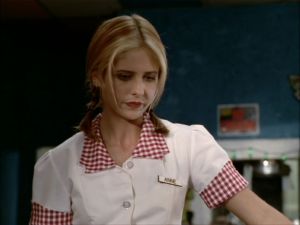 Seeing how this is a season opening we once more have Buffy dealing with the fallout of last season’s finale and spending most of the episode in kind of a daze, plagued with daydreams of her and Angel which I guess is to be expected when you’ve just driven a sword through your boyfriend and sent him to hell. Thankfully though unlike the previous season opener she manages to snap out of this daze and revert back to her usual wisecracking asskicking self before the episode ends. That being said Sarah Michelle Gellar once more showcase the vulnerable side of Buffy which she always does so well and to see the slayer reduced down to an harassed waitress makes for a great opening.

At the same time this episode really serves to expand the Buffy universe by opening up Los Angeles as another city with its own supernatural presence and essentially establishing the setting for “Angel” which would also choose the city as its setting. On a more obscure note we are also reintroduced to the character of Joan who the more obsessed fans will remember as the vampire wannabe “Chantarelle” in the episode “Lie To Me” and who we find out has over the various periods of her life and involvement with various questionable cults and groups has taken on a variety of names. Here though we meet her as Lily but by the end of the episode has changed her name again as she becomes Anne. Interestingly she would be carried over to “Angel” were we runs the “East Hills Teen Centre” helping street teens, though bizarrely Angel never made any indication of recognising her despite him briefly seeing her in “Lie To Me” but again this can be overlooked when you consider how well they ultimately managed to blend the worlds of Buffy and Angel together with these kinds of subtle crossovers.

While a large portion of the episode is taken up with Buffy playing detective and trying to find out what happened to Rickey the payoff is ultimately a great one, as Buffy discovers that the missing street teens are actually being kidnapped to a demon dimension to be used as slave labour. He added twist being that time there moves a lot quicker and meaning that someone can be gone for years and only a day has passed in our reality and hence explaining why Ricky is found as a bewildered old man. 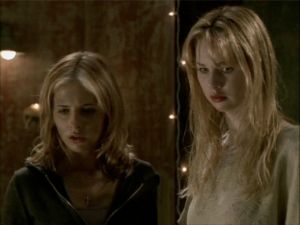 These unnamed kidnapping demons have some great make up effects with their heavily scarred faces aswell as one who appears to be wearing an executioner’s hood made of human skin. Ultimatly though they prove to be little threat for Buffy who gets to spend the finale showing off some impressive fighting skills including a nasty looking arm break as she quickly dispatches them with the best demise of the episode saved for the head demon Ken getting a portcullis dropped on his legs before being bluggoned to death by Buffy after she gives him one of her killer one liners

“Hey Ken, wanna see my impression of Gandhi?” [beats him to death with a club] “Well, you know, he was really pissed-off.”

For the Scoobies meanwhile this is a pretty quiet episode as they spend most of it concerned with their return to Sunnydale High for their final year aswell as the status of their relationships with Oz and Willow still very much together and Oz now repeating the final year seemingly for the purpose of giving him a reason to still get at the school which couldn’t be deemed creepy. Xander and Cordelia it would seem have gone their separate ways having spent the months which have passed between seasons apart, yet here we see that they clearly both care for each other still even if they won’t openly admit it. Giles meanwhile busies himself searching for Buffy and chasing false leads of her location, though he does get one of the episode highlights as he meets with Buffy’s mum Joyce who strangely blames him for her leaving town and not the fact she kicked her out for refusing to stay home and instead choosing to stop the world being sucked into hell!!

It’s a great start to the season that acknowledges the fallout from the end of season 2 without feeling that it is trying to wrap everything up so that it can get things back on track, even if we have to wait till next week for the big group reunion, the last shot of Buffy on her mother’s doorstep is more than a perfect finish while assuring us that she returned to Sunnydale instead of pulling a Bruce Banner and moving onto the next town, which interestingly would have essentially been the plot line for the cancelled Faith spin off following the bad girl slayer who will soon also be making her debut this season.