“I think it’s safe to say we found Sean. He was skinless dipping in the pool.” – Cordelia

It would be just typical that we would end this year one episode away from the season finale and hence meaning that we can’t kick off 2016 with a new season, but alas this is still a great episode to end the year on, especially after the ho-hum previous episode.

This week Buffy and the Scoobies are forced to investigate a series of attacks on the school swim team by a mysterious sea monster which is leaving them as skinned husks. However the link between the team and these attacks might be closer than  first seems.

Another overlooked episode while also adding to the general feeling that the monster of the week episodes this season have been a lot stronger than the actual big evil, which is seemingly further reinforced by the pointless appearance of Angel here who continues to feel lost in this season. More so when you compare him to the other big evils which followed and which we could see actually carrying out the steps of a master plan rather than providing comic relief with the infighting of the vampire trio which have been at the centre of this season.

Opening to a rare beach outing for the group as the swim team celebrate their recent winning streak while some members of the team choose to celebrate by dunking Johnathan in an ice bucket as he continues his role as providing cameo appearances and generally being in the wrong place especially for him and making it all the less surprising that he would become a supervillain as part of “The Trio”. It’s not long after this that we get the first skinned body of the episode, which considering the time this episode was shown at (around 7pm here in the UK) it is the first of several surprisingly gory moments this episode features. Its also during this opening we get the first look at the monster of the week which is essentially a reworked version of “The Creature From The Black Lagoon” though certainly with a more snarling face, which helps you get past the similarities between the two designs.

Essentially a play on the use of steroids by athletes, only here given a Sunnydale twist as Xander finds out while going undercover in the swim team, which of course was not an excuse for the Nicholas Brendon fanbase to see him in a pair of speedos (enjoy) that the coach is dosing his team through the use of Steroid sauna’s with added fish hormones as previous used by the former Soviet Union. The downside of course being that its turning the team into monsters, as we soon discover thanks to some gruesome skin shedding by several members as they succumb to the effects of this dosing. Scarier though is the fact that there is seemingly no way to reverse the monstrous side effects and leaving the coach with a pit of monsters, he feeds his co-conspirator to and more disturbingly offers Buffy as a mate for.

There is a scene in the episode were Cordelia thinks that Xander has also been turned into a monster, that shows how much she actually cares about him and making their relationship all the more believable despite the fact that they are still seemingly from polar opposite social groups, even with Cordelia now part of the group. This is really highlighted by the touching speech she gives when faced with the possibility her boyfriend has just turned into a monster.

“And we can still date. Or not…I mean, I understand if you want to see other fish. I’ll do everything I can to make your quality of life better, whether that means little bath toys or whatever.”

It should also be noted that this episode also features an early appearance by “Prision Break” leading man and writer of “Stoker” Wentworth Miller who here shows up as Gage a member of the swim team and who also adds to the ongoing role reversal in the show as he is saved from Angel by Buffy only to then request she walk him home, giving a fun subtle twist to the usual damsel in distress. 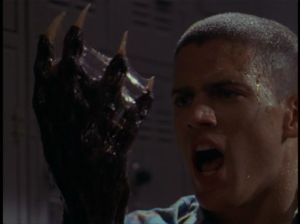 It’s a fun episode and one which perfectly use the Buffy model, as it manages to be both scary and funny as it somehow walks a tight rope between the two combining some witty one liners with some still effective gooey effects, this episode makes for another standout for the season, if not the show as a whole.