Remember in Season 4 when a lot of bad things were happening at the Prison and they interrupted everything to spend two full episodes catching us up on what the Governor had been up to? It happened again. Not with the Governor, but Morgan and his stick. So forget the insanity of the herd, the Wolves and the Is-Glenn-dead-or-not mystery, because none of it was addressed last night.

The episode opens with Morgan talking to the Wolf that attacked him at the end of the season’s second episode. Morgan did not kill him like the ending implied, but just dragged him to the holding cell below the armory. Then Morgan tells the Wolf his story.

Flashback to after Rick, Michonne and Carl met Morgan in Season 3’s “Clear.” During a fit of crazy, Morgan accidentally set his place on fire, which pushed him out to the surrounding woods, where he killed anything that moved, Walker and human alike. When he heard a bleating goat, he found a cabin belonging to a peaceful man by the name of Eastman, who had his own tragic past. Morgan tried to kill Eastman, but was knocked out and put in a cage instead. Eastman tried talking to Morgan to learn his story, but Morgan wouldn’t budge for a long time. Eventually he came around, and Eastman taught Morgan the art of Aikido and the belief that all life is precious. Unfortunately, Eastman was bitten and convinced Morgan that even though he’d be safe at the cabin, he should seek out other people. After burying Eastman, Morgan found the signs for Terminus. In the present day, Morgan tries to convince the Wolf that if he changed, anyone can. But the Wolf, who is injured (possibly bitten?), says that if he survives his wound, he will still kill every man, woman and child in Alexandria.

I wasn’t happy when I realized that the show was dropping all the cliffhangers for a 90-minute Morgan-centric episode, but it was very good. Just maybe should have saved it for a time when all hell was not breaking loose with everyone else on the show.

Thankfully they brought in a fantastic actor to play Eastman. John Carroll Lynch saved this episode. I think Lennie James is captivating as Morgan, but if a lesser actor had played opposite him for ninety minutes, I’d be rioting right now. I love Lynch’s ability to play just about anyone, and his turn as a life-protecting, former murderer less than a week after appearing as John Wayne Gacy on American Horror Story was fabulous. 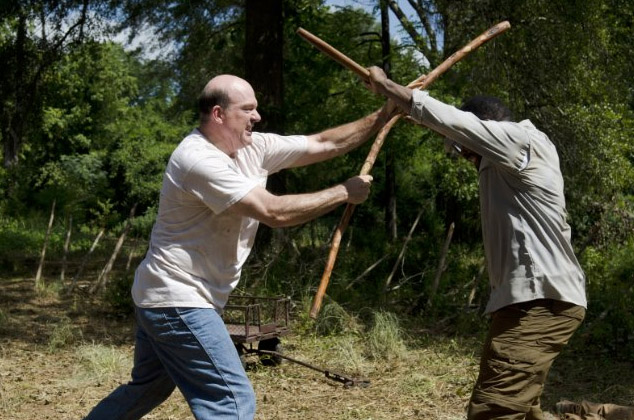 I’m glad the writers made an excellent argument for Morgan’s “life is precious” mantra. I was annoyed when he let the Wolves go, more than once, but knowing that he learned it from Eastman helped me understand the reasoning more. Eastman’s story broke my heart. Losing his family to a psychopath for whom he would not approve parole was terrible. But then learning that Eastman got his revenge on the guy and it did not make him feel the least bit better was the turning point. The change in Morgan really didn’t make sense until we met Eastman, who had gone so far down the rabbit hole, there was almost no coming back. So I thank the writers for bringing Morgan’s current story full circle.

I still think the producers pulled a dirty trick on us by throwing it here in the season lineup. It was a sadistic move, but it was still a very good episode. Just bad timing.