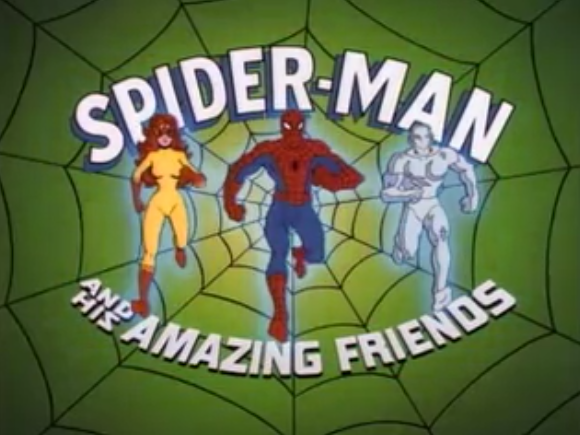 Episode Title: Attack of the Arachnoid

One of the hottest superhero shows right now is Marvel’s first collaboration with Netflix, Daredevil. So, the time is right for this classic Marvel character to put in an appearance on Spider-Man and His Amazing Friends. It turns out to be a very brief appearance, however, but we’ll take what we can get in this week’s episode Attack of the Arachnoid.

The episode begins with the deadly supervillain The Scorpion stealing a canister of Z99, which the Stan Lee voiceover explains is a mysterious gas that turns normal people into dangerous super-criminals. The Spider Friends manage to take care of The Scorpion’s plot, but more trouble is on the horizon. You see, a scientist named Zoltan is desperate for more money to fund his research. He theorizes that Spider-Man gained his powers from the bite of a radioactive spider. So he has created his own spider serum to duplicate Spidey’s powers. Zoltan’s plan is to commit crimes disguised as Spider-Man so he gets the loot he needs and the real wallcrawler gets the blame.

Zoltan starts committing crimes in a Spider-Man costume, and even ends up battling Iceman and Firestar at one point. Things get so bad that Spidey gets arrested and almost gets unmasked at his hearing. However, his attorney pal Matt Murdoch comes in just in time to stop things. Stan the man tells us in his voiceover that Spidey has no idea that Murdoch is Daredevil. Despite the legal wranglings, Spidey has to spend some time in jail. Of course, he’s locked up right next to his old pal The Scorpion who busts through the wall to attack Spidey. Meanwhile, Iceman and Firestar track down Zoltan just in time to see the spider serum he’s been taking cause him to mutate into a giant half man half spider creature that threatens the whole city.

This episode does have some major problems. First off we have Z99 – a gas that turns people into super-criminals!?! Who exactly would invent something so ridiculous and keep canisters of it lying around for creeps like The Scorpion to steal? The Scorpion also ends up being a bit of a problem in this episode. After all, he’s locked up in prison after being captured, but he’s allowed to still wear his costume which has a large tail that smashes things and shoots laser bolts. Whatever happened the the old black and white striped prison outfits? Evens so, I liked the character of The Scorpion. The voice, performed by Neil Ross, is spectacularly over-the-top. Plus, The Scorpion gets some strange lines such as, “It’s spring for us, but for you it’s fall”…then he clips Spidey’s web and makes his drop. As for The Arachnoid, he’s not the most satisfying villain, but his mutated form at the end of the episode is pretty cool. It’s almost a bit too Lovecraftian for a Saturday morning kiddie show. A very disappointing aspect of the episode is how Matt Murdoch/Daredevil is wasted. His appearance is essentially a cameo, and we only see him as “the man without fear” in a short flashback. The setup is perfect for the hero to put in appearance, but alas all of Murdoch heroics here are in the courtroom.

So, while this episode has some fun moments it also reeks of missed opportunities. Next time we’ll see how our three heroes ended up teaming up in the obviously titled The Origin of the Spider-Friends.