Episode Title: “Night of the Huntress!”

Last week we were “treated” to a Sherlock Holmes story, this week we are taken on a brief foray into Camp. Camp has been a solid part of the Batman mythos ever since Adam West donned the cowl in 1966, this week we get to see what kind of camp The Brave and the Bold’s Batman can serve up (one would hope with a side of cheese)

The teaser has Black Canary teaming up with Gotham favorite son to take down the undead Solomon Grundy, who appears to have taken on a gangster persona. Black Canary primarily uses Grundy’s own dimwittedness as a weapon against him, with a little help from her distinctive canary cry. 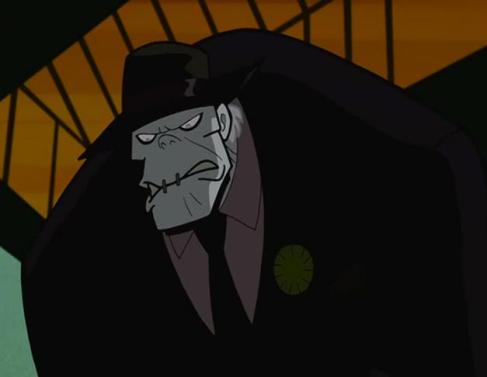 The story proper begins with proper begins with Jaime Reyes and his obnoxious pal Paco on the Campus of Gotham University for a tour. The teenage pair reveal that they are far more interested in the ladies of Gotham than education when their tour guide, Helena Bertinelli (the alter ego of the Huntress), arrives. Just a few minutes into the tour a notification of a prison escape flashes across a nearby television screen, and Bertinelli and Reyes both excusee themselves to become the Huntress and Blue Beetle (unbeknownst to one another). At Blackgate Prison the ridiculous criminals Babyface and Mrs. Manface are breaking out their old gang members Polecat Perkins, Hammertoes, Skeleton Keyes, and Tweedledum & Tweedledee. Batman arrives to thwart the escape, but is overcome by the villains’ superior numbers when Huntress and Blue Beetle arrive to help even the odds. In the ensuing melee the trio of heroes manage to restore order to the prison, but fail to prevent Babyface and his crew from escaping. Beetle is immediately smitten with, as well as distracted by, the beauty of Huntress, but our trio of heroes press on to investigate exactly what Babyface’s shenanigans are all about. An interrogation of the basement dwelling criminal the Calculator reveals that the nefarious gang of escapees are planning to steal a secret cache of impounded super weapons in order to become Gotham’s pre-eminent crime family. The heroes confront the bad guys just after they have stolen various mechanized battle suits, and powered up combat ensues. In the fracas Blue Beetle has to be bailed out of repeated jams because he is too busy leering at Huntress to pay attention to the fight going on around him. Ultimately Beetle’s inattention leads to the protagonists capture and placement in a giant hourglass themed death trap. Just like Adam West did before him, Batman manages to escape the tedious yet lethal conundrum. As Babyface and company crash the annual summit of Gotham’s crime families, Batman and his fellow heroes show up for a third round of battle with the criminals. Batman reveals that the Batmobile transforms into a mecha-bot and he takes on Babyface directly. Blue Beetle resolves to stop acting like a lovesick puppy and activates his suit into battle-mode. Eventually our heroes are victorious, and Huntress teasingly tells Beetle to call her in 5 years. Blue Beetle wonders if she’s sincere, but Batman warns he’s got no chance. 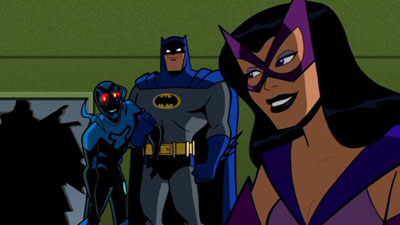 I am a big fan of campy stories, shows and movies, but camp can be difficult to do well, and particularly difficult to do intentionally. For the most part, this episode does a pretty effective job. The villains are made up of a rogues gallery that would be right at home in an old Dick Tracy strip, with quite literal names that describe their ludicrous deformities that only sometimes enhance their effectiveness as criminals. Huntress is a good character to pair with Batman as well, a fierce anti-heroine with roots in the criminal world who works well as a slightly more noble surrogate for Catwoman. The biggest flaw of the episode to me is Jaime Reyes, he seems to be showing up entirely too often in the series as if the creators are going to force the viewers to like him regardless of their natural inclination. Taking a character that I already am not particularly fond of and portraying him as a drooling, lecherous bag of hormones only succeeds in persuading me to like him even less. There is plenty of opportunity for humor in an episode with bad guys named Babyface and Mrs. Manface without throwing in an enamored teenager, and honestly objectification of women isn’t a particularly noble source of laughs in any situation. Overall, there was enough fun in this episode to make it worth watching, but I would only consider it slightly north of the middle of the road.