Pilot episodes can be notoriously difficult things to pull off, more so when they are spin offs from a universally popular series which is the situation this show finds itself in with “Rebirth”. Originally designed to be released as a two part episode it would ironically end up being shown with both parts joined together in a TV movie format which arguably works a lot better than the original intention the show’s creators had of splitting it into two parts.

Opening in 2019 with an aging Bruce Wayne still fighting crime as Batman only now with a more advanced suit than we have become accustomed to seeing him wearing and one which will later be passed onto Terry (okay he steals it originally) when he takes on the role of Batman. During this opening rescue which sees Bruce suffering a minor heart attack and in turn causes him to break one of his cardinal rules as he points a thug’s gun at his attacker. This is such a great scene and essentially serves to provide the background of why Bruce stopped being the Batman, a point only reinforced as we see him turning the lights out in the bat cave and muttering “never again”.  The bat cave we see in this scene now resembling more of a museum to his achievements and foes fought than its previous more sparse design we saw in the original series. Still with its numerous nods to that series especially with the criminal props it will no doubt amuse the established fans as they try to place where each piece came from. 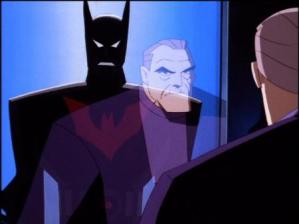 Fast forwarding to 2039 our first introduction to the neo-Gotham which essentially gives the show a clean slate and time is wasted in quickly establishing this new setting, which sees Wayne Enterprises now part controlled by the shady Derek Powers who currently has a stranglehold on the city with his seemingly unlimited power and wealth. Elsewhere the ghosts of old Gotham can still be found as the legacy of the Joker lives in through the street gang “The Jokerz” who will appear regularly throughout the series and whom pay tribute to the long since deceased crown prince of crime by pressing in various forms of clown garb.

Terry McGinnis while a teenager it soon is clear from his first introduction that he is very much the polar opposite of Bruce as a carefree teenager who despite having some impressive fighting ability even prior to meeting Bruce. He is of course more concerned with school and his girlfriend Dana than being a costumed vigilante. Even after a chance encounter with Bruce which leads him to uncovering his secret doesn’t leave him immediately wanting to pick up things were Bruce left things. Bruce is equally not too concerned about anyone reviving the Batman legacy anytime soon, having now become an elderly recluse having long since fallen out with his allies who haven’t passed away. Equally interesting is that Bruce has now essentially allowed his personality to be consumed its darker side which he previous channelled through his Batman alter-ego. This is especially noteworthy during the scene where he cuts off the power to the suit leaving Terry to essentially be beaten to death by thugs, only changing his mind when reminded of his softer side by his dog Ace.

While the show does makes the choice to perhaps play things a little to close to the original Batman in terms of setup with the turning point for Terry also being the death of a parent with his father being murdered under suspicious circumstances which leads him to becoming Batman to further his own investigation, its thankfully a plotline which is wrapped up with these first two episodes, unlike Bruce whose driving force was always not knowing who killed his parents. Terry as we will see in later episodes is instead fuelled to continue as the Batman because he wants to make a difference to Gotham the same way that Bruce did as Batman.

The new bat suit along with a more modern animation style perfectly suits the shows sci-fi / cyberpunk style while its encouraging to see he creators preferring to establish the show on its own merits rather than trying to rely to much on what they established with the original Batman series. This is only further highlighted by the main villain here being the head of a big business corporation Derek Powers rather than someone as gimmick heavy as The Joker. True by the end of the episode this has changed slightly with Powers turning into the radioactive Blight but even in this super powered (and more luminous form) it still fits with the setting of the show and in many ways mirroring Bruce’s Batman timeline as were he created the Joker by knocking him into a vat of chemicals, Terry achieves the same by unleashing the nerve gas on Powers which ultimately turns him into Blight. The maniacal laughter of both Powers and the Joker after seeing their new forms only strengthen this link.

Unquestionably this a strong start to the show and even had it not too off (which thankfully it did) it would have made for a fun what if style movie. More so when it avoids so many of the origin story pitfalls which tend to plague pilot episodes, which is certainly helped by it being a spin off, but even without this advantage the show manages to establish a wealth of background information without the plot grinding to a halt under the weight of exposition. The voice acting is once again great with fans of the original series no doubt glad to see the return of the Kevin Conroy to voice Bruce Wayne while Wil Friedle here in his first voice acting role is perfectly suited to the role of Terry as he brings a sense of fun to the role of the Batman rather than keeping things as dark as the original series, these pilot episodes serve as perfect tone setter for what is to follow.