Silly me. I thought “Arrow vs. Flash” was last week, but DC’s top 2 comic book TV shows played another game of “can you top this?” Just as it seemed like the Flash vs. Reverse Flash confrontation gave Team Flash a seemingly insurmountable advantage, we get a jam-packed episode filled with major revelations after major revelations, Oliver vs. Ra’s al Ghul, the debut of A.T.O.M. and that insane cliffhanger making it clear that “Arrow” once again established itself as the king of the TV comic book shows.

While Team Flash celebrated the holidays with a nice round of Grandma West’s famous eggnog, you had a feeling things would be a bit different in Starling City where the only Christmas present presented was a bad guy to Capt. Lance’s doorstep courtesy of Arrow, sporting his updated outfit from Cisco and Caitlin.

Arrow doesn’t have long to revel in the holiday spirit though as Merlyn appears fully clad in his Dark Archer getup. No, make that multiple Dark Archers who use their superior numbers to string up Arrow while Nyssa arrives with a message from Ra’s al Ghul: Arrow has wasted too much time in bringing Sara’s killer to justice and he now has 48 hours to produce the killer or Starling City will be invaded by The League of Assassins.

Laurel is paying respects at Sara’s grave site when she’s spotted by Thea, who was coming by to visit her mother’s grave. Laurel, in a continuing theme in the episode, can’t lie anymore and tells Thea that Sara was killed and makes her promise not to tell Oliver or Capt. Lance. Later, Lance surprises Laurel with a visit from her mother, but the mention of Sara tips her off that all is not well and Laurel reluctantly tells her Sara is dead and she’s plotting payback on the killer. Mama Lance is very supportive of this plan.

In another nice nod to the synergy between the two CW DC shows, Felicity checks out a news report of a yellow blur sighting at STAR Labs from last night’s Reverse Flash appearance on “The Flash.” Felicity finally heard back from Caitlin regarding the analysis of the arrow that killed Sara and the DNA is a match for Oliver. Oliver’s immediate thought is Malcolm Merlyn and he and Arsenal track down a surveillance video revealing Malcolm arriving in Starling City the day before Sara’s death … with Thea.

Diggle and Felicity quickly finish putting the pieces together and realize Thea’s DNA would be a match to Oliver’s and would be the non-average height of the assassin that killed Sara. Oliver refuses to believe it and tries to get the truth from Thea, but she maintains her lie that she wasn’t in Starling with Malcolm then. With the deadline approaching, the team suggests Oliver try and get the truth from Thea … as Arrow.

Arrow shatters Thea’s balcony window and she feigns helplessness long enough to spray glass shards at him and stave him off long enough to escape. Stephen Amell is really nailing the devastation of Oliver realizing his sister has been hiding a lot of secrets from him. Back at Verdant, Merlyn finally surfaces with the reveal we’ve been waiting all season on as he shows Oliver a video of Thea in fact killing Sara although she has no idea what she’s done. Turns out he was slipping a drug in her tea — shown during their training sessions — that made her susceptible to his suggestions. Merlyn figured he’d use Thea to force Oliver to challenge Ra’s al Ghul to a duel to the death. It’s really a win/win for Merlyn as either way, one of his chief rivals gets killed. John Barrowman hasn’t been seen in every episode this season, but whenever he appears, it’s been really bad news for Oliver and I love that his main villain is living up to his billing.

This ties in to the Hong Kong flashback as Oliver is becoming more adept at interrogation and along with Maseo, they encounter China White’s agent who was similarly doped out on the drug with no knowledge of his actions in helping her steal a bio-weapon. Maseo now is concerned China White will come after his family and we get a quick duel between Tatsu and China White. Maseo’s son is left behind, but China White has taken Tatsu somewhere we’ll have to find out much later.

Continuing our big reveal theme, Ray finally tells Felicity everything. He abruptly ended their makeout session as he felt like he was cheating on his girlfriend Anna, the last woman he intended to kiss. Unfortunately, Anna got caught in the fray during the Murakuri Invasion and Ray blames himself for not being strong enough to save her from getting killed. Ray is experimenting with miniaturized technology and in part bought Queen Consolidated to get access to their OMAC suit, which he is renaming Advanced Technology Operating Mechanism or A.T.O.M. and he wants Felicity’s help in protecting the city.

Just before Ra’s unleashes the hounds on Starling, Oliver comes forward to say he killed Sara and challenges Ra’s to a duel. Maseo and Nyssa are stunned, but Ra’s is more annoyed that Oliver is insulting his intelligence. Although he’s not quite Liam Neeson, Matt Nable’s take on Ra’s is starting to win me over. While he knows Oliver didn’t really kill Sara, he gives Oliver 12 hours to put his affairs in order, which for Oliver means telling Thea not to trust Merlyn, telling Roy to watch out for Thea, a handshake with Diggle and one last declaration of love to Felicity, who pleads with Oliver to become a killer one more time so Ra’s doesn’t take advantage of his humanity and emerges victorious. It was a bit surprising we didn’t get a farewell to Laurel as well, but Ra’s isn’t known for his patience. 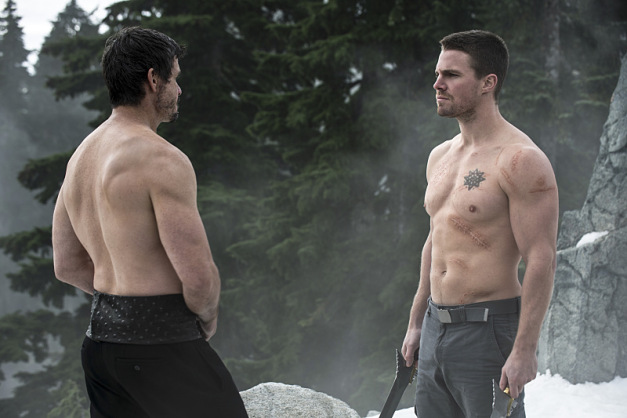 Now, we get to the payoff of the episode long cuts to Oliver scaling a mountain. At the peak, Maseo and Nyssa are there and Oliver is told to honor tradition and take off his shirt, revealing a mass of scars and wounds. Ra’s recalls his first kill when he was 11 and the pride he felt in eliminating evil, the motto of the League.

Ra’s doesn’t even bother grabbing a weapon, instead taking one of Arrow’s swords and thoroughly beating Oliver down. As Oliver has been at least on even footing with his opponents since his first encounter with Merlyn, this was a jarring sequence and it’s soon apparent this isn’t gonna end well. Ra’s has his sword at Oliver’s throat and commends him on lasting longer than most. Oliver has one last burst, but Ra’s counters with a jab to the throat and a sword to the chest. Oliver starts flashing back to his loved ones as Ra’s offers up a prayer before kicking Oliver off the mountain and one heck of a cliffhanger. Best thing about this clash? Not even caring that this should be Batman squaring off against Ra’s.

So… killing the main character off is certainly one way to go to winter break. Normally, you’d expect a supporting character to get killed, but this was a perfect way to follow-up the new set of eyes on the show since the Flash crossover. Is there any way Oliver can return like Lazarus to get revenge on Ra’s and Malcolm? Well, clearly, but it’ll be fun seeing how that happens.