Well, we’ve been hinting that something big was on the horizons for the Power Rangers, but now that time has finally come. It’s going to take us two episodes to get the payoff, though. Strap in, here comes White Light Part I. As this episode begins, there is a lot happening in Angel Grove. To start with, Bulk and Skull are still on their mission to find out the true identity of the Power Rangers. This is nothing to worry about, though, especially when Kimberly bounds into the youth center to tell Billy and Trini that she just got a letter from Tommy telling her that he is returning to Angel Grove at the end of the week. So, the three friends head off to the park where Zack and Jason are playing football with some others to tell them the good news. 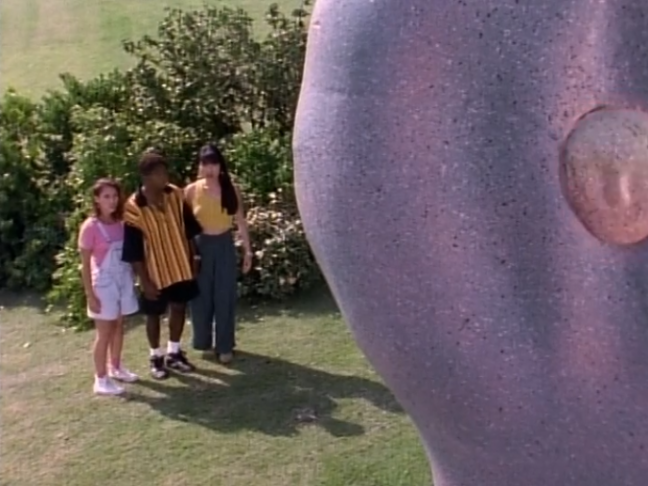 Meanwhile, since things are quiet at the moment, Zordon and Alpha shut things down in the command center and head into some sort of secret chamber to work on something mysterious. However, Lord Zedd senses that the morphing grid is now somewhat weakened, so he hatches a new plan. He zaps a weird statue of a fist in the park, which slowly starts to transform into something called Nimrod, the Scarlet Sentinel. Meanwhile something strange drops out of the sky right in front of Bulk and Skull, who are scanning the park for clues about the Power Rangers. They investigate and find a crater containing a strange object that just happens to be the container that imprisons season one big baddie, Rita Repulsa. They end up taking the weird item back to Skull’s house to investigate further. By the time Billy and Jason show up on the scene, the bullies are gone.

As for the other rangers, they soon notices the statue which is transforming into a monster…and leaking green goo to boot. Billy and Jason join them just in time for a puttie attack, after which our heroes head to the command center to find it deserted. They don’t have time to fully investigate, though, since Zedd decides to unleash Nimrod. At the same time, we see Tommy swimming at the beach suddenly zapped by Zedd. Of course, the rangers head off to fight the monster, which not only grows to giant size very quickly, but also ends up producing two equally giant co-horts. The battle proves to be very difficult for our heroes, so Billy decides he should teleport back to the command center to try and find out what is going on with Alpha and Zordon. While there, he finds the secret chamber and spots them doing something strange. It seems they are trying to create a new Power Ranger. This marks the end of part one. There is an awful lot crammed into this episode, so there is no choice but to move through things quickly. The pace of the episode is dizzying but it certainly helps keep things moving. Pretty much everybody is given something interesting to do in this episode, including Bulk and Skull. They aren’t just the comic relief this time, they actually seem to be doing things that will hopefully payoff in the next episode. I will say, though, that this installment does feature some pretty big leaps in the show’s already flimsy logic. I mean, I don’t really buy the concept of Zordon going, “Well, everything seems quiet, let’s just shut down the command center without telling the rangers.” I mean come on, pretty much every episode of this show starts with what seems like a calm quiet day, only to have some giant monster attack! Those who don’t learn from history are doomed to repeat it…even floating disembodied heads like Zordon. Speaking of giant monster attacks, this one is one of the strangest. It’s created from a statue of a fist…why there is a statue of a fist in Angel Grove, I have no idea. Thing is though, the statue is white, yet the monster is dubbed Nimrod the Scarlet Sentinel. Scarlet, as in red. Why would Lord Zedd zap a white stone statue and expect it to be red? When the monster finally appears, the only thing about it that’s red is it’s costume. So, what if decided to wear green that day? Would it become Nimrod the Emerald Sentinel? More baffling than that, however, is that when in monster form, this thing really doesn’t resemble a fist or hand anymore. To be honest, it looks like a wad of macaroni with a kabuki mask in the middle. The fact that it can instantly summon two other monsters, who honestly look more intimidating than Nimrod does, is kind of impressive…but in this episode we really have yet to see what true mayhem this monster can dish out. Honestly, though, I’m not as excited to see what Nimrod can do as I am to see what Rita Repulsa will bring to the proceedings. Bulk and Skull spend half of this episode trying to crack open her container with various power tools, so we know she’s got to factor into things in part II. As annoying as she sometimes was in season one, I’m kind of looking forward to seeing her return. But that’s not all we have to look forward to. After all, Zordon and Alpha are up to some sort of Frankenstein stuff creating some sort of new ranger. It’s all a little freaky sounding, but we’ll have to wait until next time to learn more. Join us then for White Light Part II.