If ever a reminder that the show’s best episodes were often the ones which fell out of the main plot for the season then this would certainly be it, let alone a reminder that just because Buffy might be the lead it doesn’t mean that any of the other group members wern’t just as capable of carrying an episode as seen here with this Xander-centric episode.

After Buffy is targeted by the demon Toth, Xander finds himself with a mysterious double who appears to be living his life better than he is. Unable to tell if his double is evil Xander now is left trying to find a way to convince Buffy and the other Scoobies that he’s the real Xander.

Evil twins have constantly been a regular plot device in most series appearing almost as regularly as episodes where characters find themselves in a “Groundhog Day” style time loop so it was really only a matter of time before we saw it happen in the Buffy-verse. Thankfully the writers don’t go down the path of giving us an evil Buffy, especially so soon after we saw her facing off against the first Slayer at the end of season 4 and in doing so essentially giving us the two sides of Buffy in combat with each other. Instead the same idea is instead applied to Xander with his double being free from all of Xander’s usual stumbling awkward charms and instead comes off as a much more confident and better dressed Xander.

Unquestionably Nicholas Brendon kills this episode as he plays both Xanders while Brendon’s real-life twin brother Kelly Donovan played his body double, only speaking when both Xanders had speaking lines. Brendon though really sell the two sides of Xander especially his double who for most of the episode is played off like the evil twin as seemingly uses a flattened quarter to get himself promoted at his construction job as well as get a fancy new apartment. The kicker of course coming from the fact that this version of Xander isn’t actually evil but just the confident positive side of Xander.

Equally on form here is Emma Caulfield as Anya who in this season has really nailed down what works for her character. This episode not only seeing her finally dealing with the reality of now being human as she spends most of the episode with her arm in a sling following the run in with Harmony’s gang in the previous episode. At the same time we continue to see her materialistic side coming more to the forefront as she pushes for Xander to finally move out his parents basement. Throughout the episode she is the right balance of humour (calling “Duel of the Iron Fist” the kicking movie) and emotion as we get to see with her handling the prospect of getting old after a lifetime lived as an immortal vengeance demon while her questing the morals of a threesome with both Xanders is a fitting late highlight to the episode.

As the villain of the episode Toth has the right amount of presence with Michael Bailey Smith doing more great monster work, while certainly no stranger to heavy make up having played numerous roles on “Charmed” aswell as playing “Super Freddy” in “A Nightmare on Elm Street 5”. Here he sports an equally great make up job which somehow makes him seem luminous at times. True he might be more of a plot device, but atleast we get a fun showdown between him and Buffy which sees him mixing things up from the usual martial arts brawls as he throws in a few wrestling slams. I would however question how safe it can be to toss a sword as requested by Buffy and which I’m sure in real life wouldn’t end well. 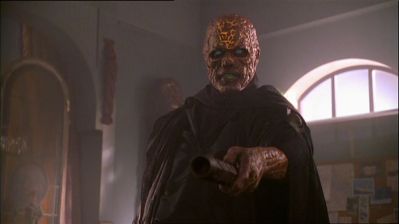 On a more subtle note are hints of relationship issues between Riley and Buffy as during the final moments of the episode he reveals to Xander that while he’s obsessed with her, he feels that she is still hung up on Angel. Spike meanwhile is shown developing his own Buffy obsession as we see him scavenging for mannequin parts at the dump to make himself a Buffy doll which he promptly kicks apart.

A great episode throughout and one which resists the usual pits falls of such a well worn idea by bringing something new to the table with Xander more than the perfect choice of who got cloned, his own clumsy attempts to solves the mystery ensuring that its entertaining throughout.

Next Episode: Out of My Mind