“So…I guess I’m starting to understand why there’s no ancient prophecy about a Chosen One … and her friends.” – Buffy

So finally this week the writers decide to address the elephant in the room and finally address how the group have slowly grown apart this season as they’ve pursued relationships and their own individual paths, but seeing how late in the season this revelation is coming said elephant is more of a rotting festering corpse than something I could really care about, but this what Adam plans to exploit.

Still feeling that the group needed that one final push, this episode sees Spike now fully in league with Adam sewing the seeds to distrust amongst the various members of the group such as making Xander believe that others seem him as a hinderance, while Willow is made to believe that they don’t approve of her relationship with Tara. Giles meanwhile is already drunk at the start of the episode, as he croons away to Lynyrd Skynyrd’s “Freebird” meaning that he takes little pushing to believe that Buffy no longer respects him as her watcher. 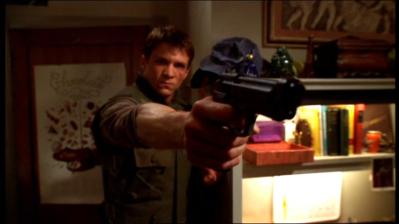 Looking back at the episode as an older viewer I only realise now just how much teen angst this episode is buried under which might have been fine when I originally watched the episode but boy is it a grating experience to see the group sniping at each other let alone the fact that three quarters of the episode is dedicated to Spike building distrust in the group while Adam basically spends another episode sitting around his lair acting philosophical. Ok that’s not strictly true as he does engage in a decent fight with Forest and Buffy which ends with Buffy having to flee while Forest gets skewered which lets face it was no big loss, especially when he’s decended into being such a whiny annoyance since Riley got with Buffy.

Outside of the in group in fighting Riley is currently laying low since walking out on the Initiative, while secretly tapping into the Initiative communications network so he can keep track of their activities. Through it would seem that they are still keen to bring him back into the fold despite the fact that he essentially turned his back on the organisation. Worse still for him is the fact that Angel has returned to Sunnydale following on from the events of the “Angel” episode “Sanctuary” and his appearance in this episode felt more like a misfire attempt to keep the two shows interlinked though we do get a no holds bared fight between Angel and Riley in which both use everything in their arsenal to try and best the other. This fight scene is a real highlight for the episode which is hardly saying anything, but it really helped save what was such a grind of an episode especially this close to the end of the season.