If the previous episode of Supergirl, “Myriad”, was one of the first season’s true high points, then the season finale, “Better Angels”, is something of a let-down. In fact, it’s thoroughly disappointing. Off the back of one of the season’s best cliffhangers – in which Kara and Alex were set for a Kryptonite-infused, Non-mind-controlled throwdown with the fate of both at stake – the resolution to this jaw-dropper is…well, thoroughly meh.  The Myriad program, controlled by fellow Kryptonian (and season-long nemesis) Non (Chris Vance) and his cohort Indigo (Laura Laura Vandervoort) is set to turn every human on Earth into a drone, before the series uses one of the worst possible Macguffins to dispose of the threat entirely.

The great thing about Supergirl has been the series’ constant riffing on DC’s mythology as well as putting relatively new/alternative and interesting things into the show to shake things up, such as Jimmy Olsen (Mehcad Brooks) and Cat Grant (Calista Flockhart) being totally different to their comic-book counterparts. “Better Angels” does much the same: in fact, the show literally ties into the Helen Slater-starring film version by giving us the Omegahedron, the “this thing can power an entire city” device by which Non and Indigo are energizing their Myriad device from the safety of a heavily disguised Fort Rozz. The problem with “Better Angels” is that the riffing, the Macguffin of Supergirl’s method to disarm the mind-control aspect of Myriad, is so hokey, so utterly comic-book contrived, it almost undermines the great work by the writers on the show to this point.

As with Zack Snyder’s Man of Steel, the “S” symbol has been retrofitted to be the Kryptonian symbol for hope, an element of this episode that feels utterly contrived as a pointed reminder about Supergirl as a character while we’re off on our end-of-season break: the way Maxwell Lord uses a simple television signal to beam words of hope into the minds of those in National City to break Myriad’s hold on everyone is technologically clunky and thematically sound, but the show sinks into the kind of square-jawed, simplistic humanization of heroism that, frankly, those old Superman serials and comic-books delve into far too much for my liking. Yes, we get it: Superman and Supergirl are beacons of hope, and yet the series has pounded into us that the greatest fear of humanity is that these Kryptonian heroes are something to be mistrusted and now we’re asked to expect that a State of The Union address by Kara will rush all that away? Tsk, it’s an easy out for a show which has rarely taken the easy options.

I’m not saying “Better Angels” is a total wash, far from it. The episode offers up some half-decent themes and plot twists, such as the revelation about Fort Rozz (a scenario I felt would play out over multiple seasons, but apparently won’t beyond this one!) and the fact that Alex and Kara reveal to their mother (Helen Slater, guesting) that Jeremiah Danvers (an unseen Dean Cain) is alive and being held at a place known as Project Cadmus – expect to see this play out big-time next season – but the weird, rushed emotional wrangling of the episode felt a lot underwhelming. The events of the previous episode provided plenty of energetic narrative angst, but “Better Angels” seems unable to capitalise on that in a way that sticks the landing.

In fact, the whole episode feels like it’s rushing too hard to a conclusion by default – yeah, it’s the season finale, but it feels like it really feels like it, as if the production were really trying (overtrying?) to one-up their work throughout the season. Various plot threads are snipped off (Non, Indigo, Kara’s job and Cat Grant’s inability to pronounce her assistant’s name correctly), some are begun (the Kara/Jimmy thing is going to be rocky, I just hope the writers can make it work) and some are just dismissed with a wave of the hand (Hank Henshaw’s illegal alien tag is waved away once Non and Co are defeated, while previously belligerent Sam Lane (Glen Morshower) actually smiling as he delivers the news, which seems counter-intuitive to his character development thus far) making this episode a real vacillation between fan-service, promoting the series in and of itself, and achieving the requisite amount of tension within the 40-odd minutes it all plays out. 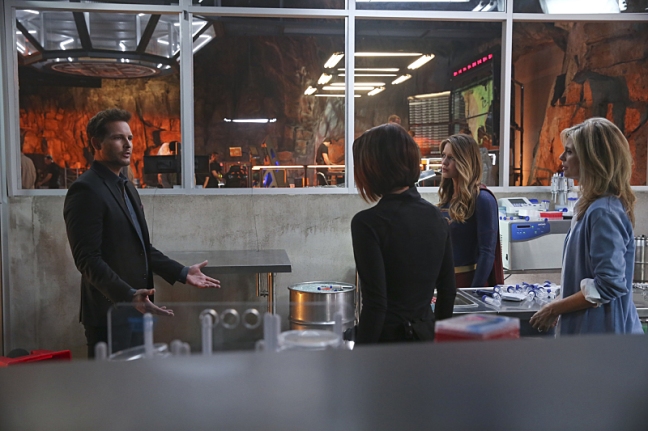 The episode does kick into gear when the Myriad program threatens to kill everyone on Earth by sending out increasingly powerful waves of energy that threaten to pop people’s heads like a watermelon. It’s this End-of-the-World scenario that brings the episode’s most drawn out series of emotional punches, almost none of which work well and feel undercut by the knowledge that the show wouldn’t actually kill off any of the series regulars – Supergirl saved both Jimmy and Winn the previous episode, letting some nameless nobody die instead, so I can’t imagine they’d kill off either of them just for shock value now, let alone anyone else. Instead, the episode goes from “hey, there’s two minutes to save the world” to “and let’s spend 90 seconds of that telling each other how much we love each other”…. I mean, c’mon Kara, this isn’t time for a bespoke affirmation of familial love, this is time to kick ass! Kara’s act of sacrifice to save the world feels less impactful than I imagine the show was going for; and the grey cloak of future story promise (like who the Omegahedron ends up with) shrouds the final moments, in which a Kryptonian pod crashes to Earth with Kara ripping off the door to reveal…well, that’s the cliffhanger, with a sense of continuation.

With “Myriad” being the great episode it was, it’s a shame to see Supergirl stagger, gibbering, to the finish line of its début season. For every moment of heroism and series-regular angst, there’s a moment of groan-worthy pontification that, for me at least, feels just silly. The fine balance between delivering a show for all and a show to suit a specific younger demographic lacks the finesse here, with the script diving headlong into overbaked comic-book tropes and half-hearted moments of emotional diffidence that don’t work as often as they should. “Better Angels” concludes with one heck of a cliffhanger (is the person in the crashed pod Superboy? a mirror Supergirl? Kara’s Kryptonian daddy? Krypto the Wonder Dog? Or worse: Beppo the Super Monkey?), but as an overall episode of the first season it leaves a lot of disappointment in this viewers opinion – it had a lot to live up to, and in my estimation it didn’t hit the heights.