Well, we’re back to OTT Liv after she ate the brains of a murdered night security guard, who also coached a junior basketball team. The investigation had a nice build to it, starting out with the abusive father of one of the team members, then focusing on an anonymous donor to the victim’s team, but fell apart toward the end. The reveal felt cobbled together at the last minute. It was random, and not the good kind of random that last week gave us, but random as in “This guy? Really? Couldn’t have thought of a better resolution than this?”

Then there was Liv. Her conversations about basketball with Babineaux and Major were fine, funny even due to the others’ reactions, but when she tricked Major into taking over as coach for the victim’s team, and stepped in to help, it just became too silly. It lost me more than any other time she’s gone too far all season, but to be fair that may just be because I don’t care about basketball, or any sports of any kind, so I’m about prejudiced. And I have to wonder, is that the only thing she picked up from her meal? I feel like sometimes the writers don’t seem to get that there are many traits that make a person, but they only zone in on one, generally for laughs. And while that can be fun, I feel like we’re missing out when it comes to episodes like this. There simply had to be more to this man that the ability to talk about basketball, right?

Thankfully, the episode offered a lot more in other areas. Gabriel, the guy who cut the Boat Party Massacre Utopium, came crawling back to Blaine, offering his recipe for the cure. Blaine had his henchman deliver it to Ravi, who was determined to do months of rigorous testing on more zombie rats. Unfortunately, Blaine showed up at the morgue with Gabriel, having promised a cure, and Gabriel injected himself with Ravi’s concoction to create the zombie rats, which was definitely NOT the cure. Gabriel died instantly, the Blaine and Ravi had the most awesome little scuffle to get to the remainder of the solution, as Blaine clearly wanted to use it as an instant zombie killing method. Ravi was able to destroy it first, so now he’s back to square one. 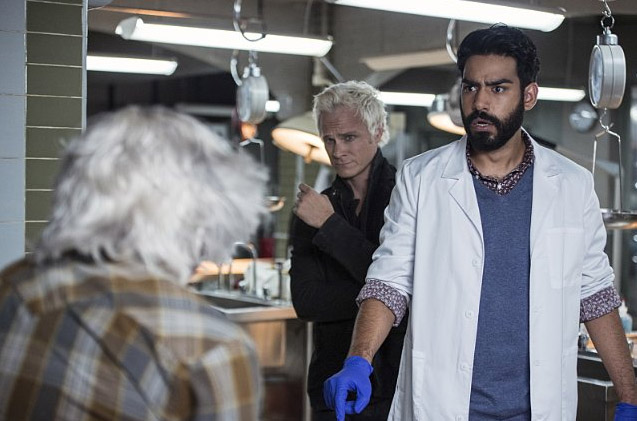 I’m still not sure what Blaine’s end game is here. The problem is I’m not sure if they’re withholding his intentions or if I’ve simply missed a few steps. I’m clueless as to why he went through so much trouble to get the recipe for the cut Utopium in the first place, and why he’d brawl with Ravi over something that kills zombies instantly when he’s proven a gun does the same thing. (RIP Lowell; I still miss you.) Then again, he didn’t name his funeral home “Shady Plots” for nothing. (Sidenote: BEST FUNERAL HOME NAME EVER!) It’s not that I mind mystery and a slow build, but I just don’t like feeling this lost.

On the romantic side of things, Liv and Major made out, but she refused to go any further with him, afraid simply kissing could turn him. After he woke up still human, she asked they try just being friends first, before building up to the romance again, but by the end of the episode, Major told her he wanted to skip the friends part and was willing to risk becoming undead again to be with her. It was all very sweet and romantic, and the two really do have a nice chemistry. I understand now that they would have been happy together had Liv’s zombification not gotten in the way. Sadly, I know it can’t possibly last. Gilda now knows that Major has gone back to Liv, but Liv is still clueless. Clearly Liv will find out about their tryst and that Major has been Van du Clark’s personal zombie exterminator, which will split them up again, but for very different reasons.

But on a lighter side, Babineaux’s flirtations with the FBI agent sent in to investigate all the missing persons (i.e. zombie) cases in Seattle were cute. He deserves more backstory, or side story, and I’m hoping this will be the ticket. And speaking of Babineaux, he just got a huge clue dumped in his lap from Suzuki’s widow. I bet he’ll take that partial brain to Liv and Ravi, and I can’t wait to see their reactions.

So this was a decent world-building episode, with good heart and humor (Ravi in Tacoma, anyone?), but the case-of-the-week was weak. Hoping for a better balance in the future.