Before we move on to season three of Spider-Man and His Amazing Friends, let’s take a moment for some overall thoughts on the first two seasons. Normally we’d do a separate recap for each season, but since season two was a whopping three episodes, we’re going to combine them here. 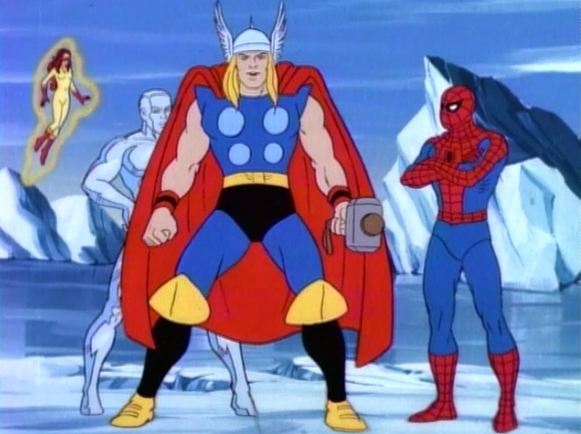 When I watched this show as a kid it was all about Spider-Man for me. That was reason enough to watch the show. Watching the show now, though, I’ve been really impressed with the way the series included so much more of the Marvel universe. Think about it, so far we’ve seen Captain America, Thor, Hulk, the X-Men, Doctor Strange, Sub-Mariner, and even more obscure heroes like Black Knight and Shanna the She-Devil. That’s just the heroes. We’ve seen just as many iconic villains, including many who are not necessarily associated first and foremost with Spider-Man. In general, it’s been nice that the series has had a bigger scope than just the world of Spider-Man.

As for the quality of episodes, I’d say the majority of them have been pretty solid, although clearly written with a kids audience in mind. There have been a few rough patches along the way…such as when the mousy old man Mr. Frump became a supervillain in episode three of season one. This episode may have been the most ridiculous moment of the series. Luckily it came early and the writers seem to have moved past such silliness as the series has progressed. We’ve also seen a lot less emphasis on the dog character, Miss Lion, as things have moved forward. Can we get an “Amen” on that one?! I still struggle with why exactly this character was included in the first place. Was it an attempt to broaden the appeal of a superhero show and get more little girls watching with their brothers? That doesn’t make any sense, though, considering the show already had a reason for the girls to tune in…Firestar, who continues to be one of my favorite elements of the show.

The big surprise for me in revisiting this show is that thirty years ago I didn’t see how annoying Iceman/Bobby Drake can be at times. When I was a kid I just thought he was cool…sliding around on all those tracks of ice. But watching this through adult eyes, his weak attempts at being the show’s comic relief can wear a bit thin.

Overall, though, the first two seasons have been great fun…and very nostalgic for me. Next time we launch into the final eight episodes that make up season three. We begin with a popular Spidey foe, The Sandman, in Spider-Man Unmasked.