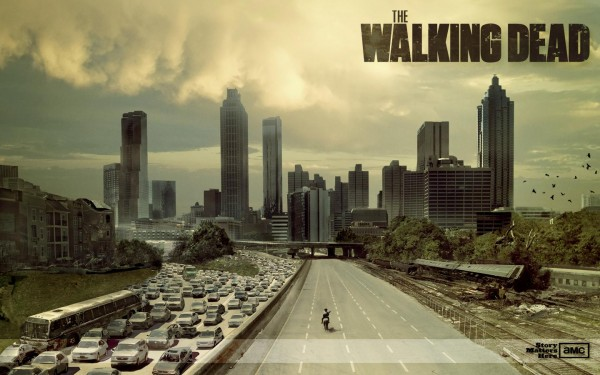 In the aftermath of the Walker attack on the camp, the survivors must decide what to do next. Andrea watches over Amy’s dead body all night and into the day, much to the chagrin of the others who know it’s just a matter of time before she reanimates. Once she does, Andrea does muster up the courage to put her back down once and for all. Meanwhile, Jackie discovers Jim was bitten in the attack. Daryl wants him dead immediately, and attempts to do the job himself, but the others stop him. Rick and Shane are at odds over several points. Shane thinks they wouldn’t have lost as many in the attack if Rick hadn’t left to find Merle; Rick thinks more would’ve died if he hadn’t come back with a lot of guns. At one point during a sweep in the woods, Shane momentarily has his gun aimed at Rick’s back, but refrains from pulling the trigger.

The best friends also debate what to do next. Shane wants to head to the nearest military base, 100 miles out, while Rick thinks going to the CDC may be their best option, as they may have found a cure and might be able to save Jim, plus have food and shelter. Rick’s option wins out, so the survivors pack up their few belongings and caravan back into the city, except for Morales who decides to take his family to Alabama in search of other surviving family members. On the way, a very sick Jim asks to be left on the side of the road because he cannot handle the ride any longer, and just wants to “be with [his] family” again. Then things cut to Jenner, alone inside the CDC, who is recording his attempts at finding a cure, but things are very bleak. Rick & Co. show up outside the sealed building. After much hesitation, Jenner opens the doors. 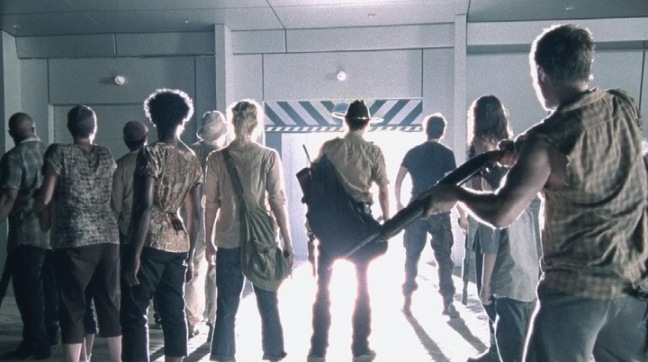 This episode is pretty excellent to go back and watch because of the great shock to the group’s core. Clearly everyone had seen Walkers up to this point, but most probably hadn’t had much contact, so the attack is very hard to endure, as they had come to feel safe in their secluded camp. They now realize what the stakes to this new world are and things are far scarier than they anticipated. Hiding out in the woods until everything blows over is no longer a viable option

Also, this is where Rick really comes to the front as the group leader. Before, it was clearly Shane, but once they decide to go to the CDC, Rick is the one to follow, which is another splinter in the friendship of the two lawmen. Outside the doors to the CDC, when everyone fears they made the wrong choice, the terror and desperation are so palpable as the panic sets in, just before Jenner opens the doors. But Rick never second-guesses his decision, something that will aid and cripple him in the future.

Then there is the oddity that is Jenner. This side trip to the CDC is not in the source material, so the writers had a lot to play with here. In a way, his presence is good, as he gives us some baseline for how long this mess has been going on (around 2 months globally). He is also the only government presence the group will encounter; the only known attempt to understand and cure what’s happening. By the end of Season 5, it’s clear all those hopes are forever dashed and survival is the only option. On the downside, it all feels so random and, again, like filler, but more on that next week after the finale. For now he is somewhat intriguing.

Overall though, all of the elements of this episode come together to make it one of the best of the season for me, second only to the pilot.