In Angel Grove anything can become a monster, it seems. We’ve had evil toys, evil clowns, now it’s time for some evil flowers. Yep, it’s like the kaiju version of Little Shop of Horrors! Here comes The Spit Flower! As we begin, Kimberly and Tommy are putting the finishing touches on a model of a massive parade float that Kim has designed. The float was chosen from many entries to represent Angel Grove High in a flower-themed (not Rose Bowl) parade. From space, Rita spots them working and sends down some putties to attack. The other rangers show up to help fend them off, but not before the putties have completely destroyed the model. Now it seems hopeless that the float would make it to the parade…and Kimberly is crushed.

There’s not much time to mourn, though. After cleaning up, Tommy excuses himself to go “take care of something,” and then the others are summoned by Zordon. It seems that Rita has sent down a strange creature known as a Spit Flower. Basically, this thing sucks up flowers and then spits them back out as weird flower monsters that drain people’s energy. The team morphs and teleports to do battle with the creature. The little vampire-toothed flowers end up being more than the team can handle. When Rita makes the creature grow, the rangers only escape being crushed because green ranger Tommy shows up in time. The team quickly summon some zords to battle the creature, but still have trouble. They then head back to the control center where Zordon tells them that they need to take out the throat sack of the monster to stop in from making monster flowers. When they return (without Tommy, I might add), Kimberly zaps it a few times with her bow before they create the power laser and zap the thing into oblivion. Later, as she watches the parade on TV, Kimberly learns that Tommy managed to rebuild the model and get her float in the parade, after all. 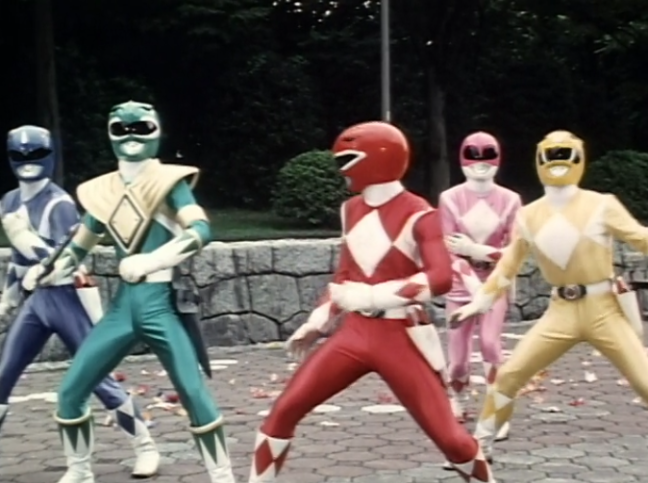 Where this episode succeeds is that it gives a one heck of a crazy monster. The Spit Flower doesn’t look like a flower at all. I don’t even know how to describe it. But I dig the crazy idea that it gobbles up flowers and then turns them into monsters. The strange little puppets used for the monster flowers clearly have teeth made out of novelty vampire fangs. These crazy little things do give us a funny sequence where Bulk (who is already allergic to flowers) and Skull are attacked by a bunch of the hungry little buggers. I guess you don’t have to have building-sized monsters to cause trouble in Angel Grove.

Where I have a problem with this episode is the head-scratching bookends of the story. Basically, the stuff involving the parade float. So, Kimberly has designed this float and the putties destroy the model. Is this really the ONLY representation of the float that exists? Did she not draw it out first? Doesn’t she have any notes or photos? The end of the episode also makes no sense. The epilogue scene clearly takes place within 24 hours after the Spit Flower attack…based primarily on Bulk and Skull’s still fresh wounds. Somehow, in this short amount of time, Tommy is able to rebuild the model (while still helping fight the creature) and give it to whoever was in charge of building the actual float. They were then able to build a humongous Rose Bowl quality float. The actual footage used is obviously from a Rose Bowl. Organizations work on those floats for a solid year!! Maybe I’m over-analyzing, but come on!!

So, while I dug the crazy monsters in this episode, the wrap around story is really lame.  Not a stellar episode, unfortunately.  Next time around, though, we get Rita’s own version of the Frankenstein monster in Life’s a Masquerade.

Goliath and the Dragon

Some Kind of a Nut