Greetings citizens of Gotham! Before we begin this week’s episode, I want to apologize for being a bit behind on the reviews lately. Not only have I been traveling a lot for work lately, but I’ve also been horribly sick the whole time. I’m finally on the mend, though, so it’s time to get back on track. This week we see the return of that unlikely pair of Egghead (Vincent Price) and Olga, Queen of the Cossacks (Anne Baxter). They are up to no good again in this week’s episode, The Ogg Couple.

We begin with the villains stealing a silver scimitar and a giant golden egg known as the Egg of Ogg from a Gotham City museum. Assuming more egg-related targets will be hit soon, Batman has Gordon come up a list of where the villains may strike next. It turns out that the reason behind the thefts is so that Olga can have a big dowry before marrying Egghead. Their next big crime is going to be to steal a large supply of very expensive dehydrated caviar…fish eggs. Of course, Batman and Robin figure out that this could be a target. However, Olga and her cossacks manage to make off with the goods before the Caped Crusaders, or Batgirl (who is also on the case) can show up. In fact, Batgirl shows up on the scene first and runs into Egghead. He claims no knowledge but under threat of being arrested, he agrees to lead Batgirl to Olga’s hideout. Batman and Robin show up shortly thereafter and then quickly head off to catch up with Batgirl.

Of course, Egghead leads Batgirl right into a trap. Though she puts up a good fight she ends up captured by the cossacks. She’s even forced to do a weird saber dance with the villains. Now it just so happens that the Batgirl cycle has a radioactive spark plug, so Batman and Robin are able to trace it with their Bat Geiger Counter. The heroes show up and, naturally, fight it out with the cossacks. During the fight, Egghead attempts to drown Batgirl in the vat of caviar. As the heroes rush to save her, the villains slip out. But, we find out later that they once again ran right into Chief O’Hara’s waiting paddy wagon.

Well, this is the last time we see Egghead and Olga on the series, and I’m kinda glad. It’s strange, though. I mean, I like both of the characters, I like both of the actors playing them…but I still just can’t wrap my brain around why the producers of the show felt the need to pair them up. It just doesn’t make any sense and in the end their stories together end up going nowhere! This time, the pair only pull of one successful crime. The whole caviar bit is quickly foiled so one can hardly call that a successful caper. I dare say that I think Chief O’Hara and his men could possibly have taken care of this one without any assistance from local superheroes. 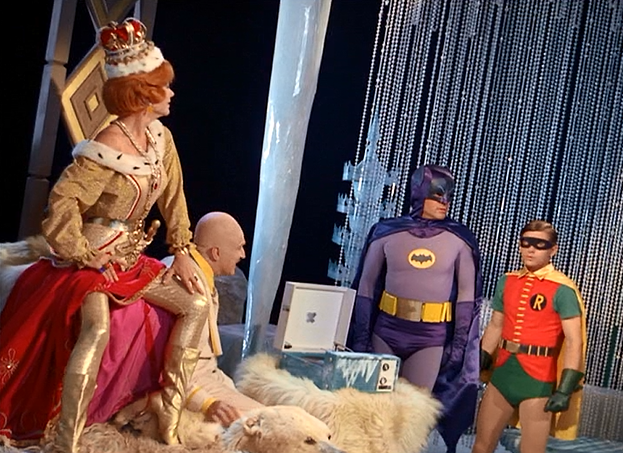 My biggest problem with this episode, though, comes courtesy of one of the bat gadgets used this time around. Actually, it’s one of the bat gadgets talked about, since we don’t actually see this handy device on screen. Batman mentions that he was able to track Batgirl to Egghead and Olga’s lair with the Bat Geiger Counter locking on to a radioactive spark plug on the Batgirl Cycle. Let that sink in a second…he was able to track the Batgirl Cycle!?!?! Now for the last fourteen episodes since Batgirl was introduced our heroes keep wondering who she is…where does she come from? So, it seems that with the Bat Geiger Counter, Batman could trace the Batgirl Cycle and find out that it is usually parked in a secret room behind a brick wall in the building where Barbara Gordon lives!!! What the heck is he waiting for!?!?!

Unfortunately, it is episodes like this that pretty much sum up the third and final season of this series. It lacks the originality, silliness, and fun of so many other episodes we’ve seen in the past. It just kind of kills time for 25 minutes. I do, however, have high hopes for next time. In the final scene we get a hint as to next week’s villains when Barbara Gordon comes into her father’s office and declares that outside she saw a greenish gold car with whiskers on the front. Yep it seems that the Joker and Catwoman are teaming up next time in The Funny Feline Felonies. Same bat-time, same bat-channel (superhero)

Goliath and the Dragon

Some Kind of a Nut