Well bat-fans, we have reached an important moment in our look at this classic show. Our episode today may be the single most memorable episode of the series. In many ways it sums up everything that is wild, wacky, and wonderful about this particular incarnation of the Caped Crusader. Appropriately, it pits our hero against his greatest foe, the Joker, whose scheme involves taking over the world of surfing. Yep, our heroes are hittin’ the waves in the classic episode Surf’s Up! Joker’s Under! 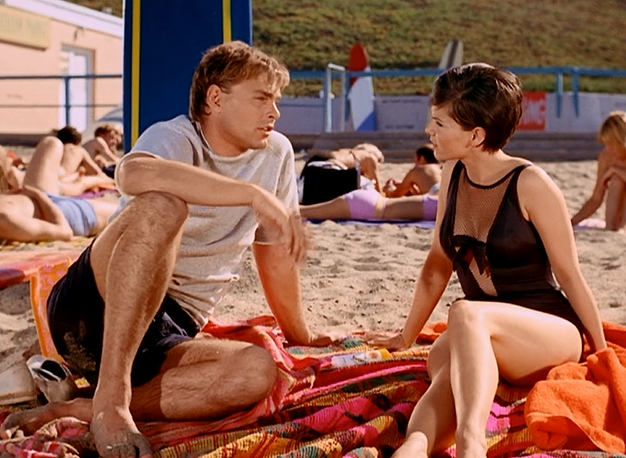 The episode begins by slightly contradicting the end of our last installment. If you recall, last time Barbara Gordon got a phone call from her surfing buddy Skip Parker asking her to join him at the beach at the same moment the Joker (played, as always, by Cesar Romero) arrives on the scene. This time, Barbara (in an absolutely jaw-dropping swimsuit) is already at Gotham Point with Skip as the Joker arrives. Upon arrival, the clown prince of crime proceeds to lure Skip to the hangout called the Hang Five and hit him with some gas that puts him into a trance. Barbara spots the villains as they escape and calls her father, Commissioner Gordon. 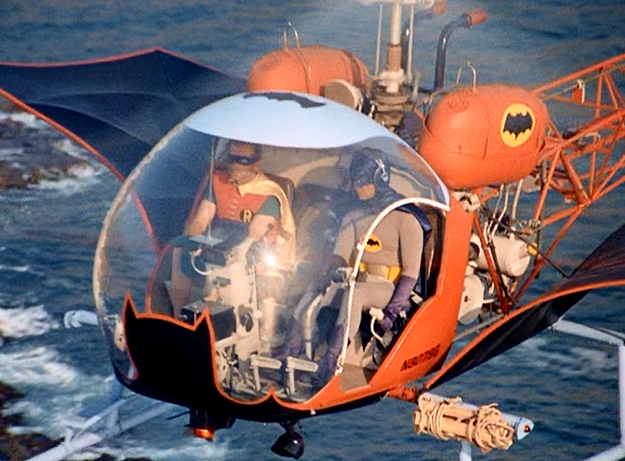 Batman and Robin head for Gotham Point in the Batcopter, meanwhile, Commissioner Gordon and Chief O’Hara show up disguised as beach bums. They arrive just in time to see a green-haired surf band singing a jazzed up version of “Jeanie with the Light Brown Hair.” All the crime fighters converge in the Hang Five and are spotted by Joker’s accomplice, the lovely Undine (Sivi Aberg). She uses a walkie talkie disguised as a hot dog to alert Joker.

Joker, however, is busy with Skip Parker. He has him hooked up to a new invention, the Surfing Experience & Ability Transferometer. Basically, it’ll take all of Skip’s surfing knowledge and transfer it to Joker. Then the clown prince of crime can become the surfing champion of Gotham Point. This will earn him a legion of fans who he will use to help take over Gotham City. Meanwhile, Batman and Robin have used the bat computer to locate where Joker has set up shop. Joker is ready for them, though. As they burst through a window, Joker’s men throw a bunch of poisonous spines from some sort of sea urchin at our heroes. They then tie them down to tables in order to turn the Caped Crusaders into surfboards. Joker’s men start covering them with goo as we cut to the commercial break.

When we come back, the Dynamic Duo are now fully formed surf boards. However, the boards begin to smoke and soon Batman and Robin bust out, thanks to causing an explosion with a portable ultraviolet bat ray. Batman and Robin then find Skip Parker, who tells them all about Joker stealing all his surfing knowledge. 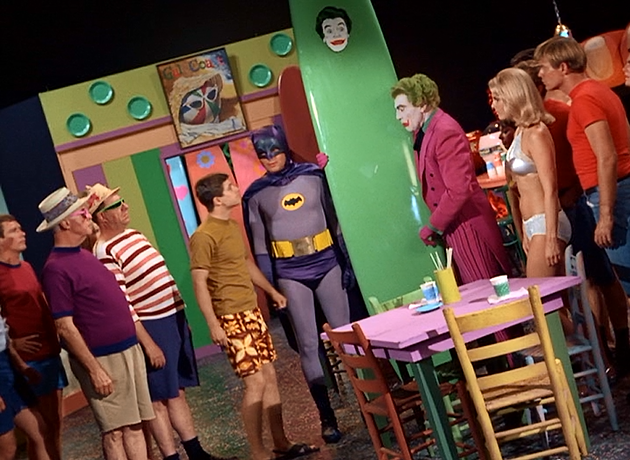 When Batman finds Joker, he challenges the villain to face him in the Gotham Point World Championship surfing title. Joker protests that the entries for the competition are closed. Then, young Dick Grayson (not Robin) enters and informs everyone that he is speaking for Bruce Wayne, who happens to be president of the Gotham Point Surfing Association. The contest between the two arch rivals will go forward.

The two enemies change into their “baggies” and head out into the surf. Each displays great prowess, but ultimately it is Batman who wins over the judges. When Joker and his gang try to escape, the obligatory fight breaks out. Luckily, both Dick Grayson and Barbara Gordon manage to sneak off and change into their superhero costumes so that Robin and Batgirl can join in the action. In the end, Joker is hauled off, with the promise that the surfing knowledge will be transferred back to Skip. 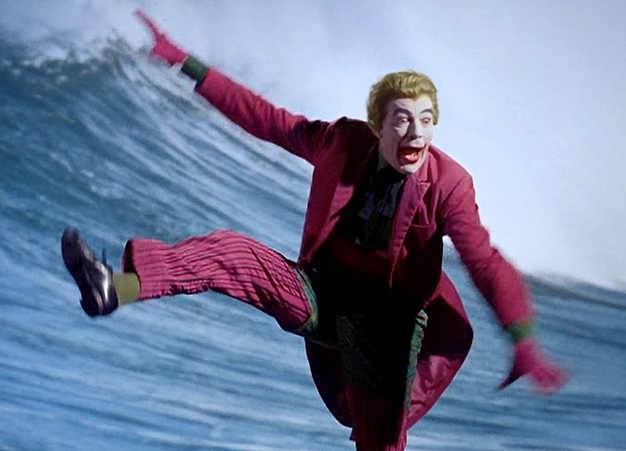 I don’t even know where to be begin with this episode. It is quite simply magical. It takes everything that is so wonderfully weird about this series and takes it to the extreme. We might as well start with Cesar Romero, who I don’t think has ever hit a wrong beat in his portrayal of the Joker. Here he has the silliest plot that he, or any of the other villains, has had to deal with…and yet Romero approaches it with the same gleeful enthusiasm that he always has. I especially love his excitement over his new invention. It’s a device that transfers the knowledge and skill of others into him. It’s conceivable that he could’ve used this device on any number of brilliant and powerful individuals. Perhaps a scientist, or a general, or an assassin…and yet the key to his plan is to steal surfing skills! You gotta admire that on a certain level.

Joker’s invention isn’t the only crazy thing that makes this episode so memorable. How about the fact that Joker and Undine use hot dog communicators. At one point Gordon tells Batman that Barbara said to keep an eye on the girl behind the counter. Batman responds nonchalantly, “You mean the one talking to her hot dog?” Speaking of Gordon, also wonderfully wacky is Gordon and O’Hara actually in the field and posing as surfers named Buzzy and Duke. We’re just getting started, though, folks. How about Batman and Robin getting speared by sea urchin spines? Then we’re given a mini cliffhanger (lasting the length of the commercial break) where our heroes actually get turned into surf boards!!  What were the writer’s smoking?

Of course, the highlight of the episode is the actual surfing competition. Batman sports a yellow surfboard with the bat logo on it, while Joker’s is green with a picture of his face. The scenes of the actual competition are anything but convincing. Adam West and Cesar Romero do their best to sell it, but what makes the sequence so fantastic is how totally fake it looks in all its rear-projection glory. It’s enhanced all the more by Burt Ward and Yvonne Craig oooing and ahhing from the beach over moves that aren’t the slightest bit impressive. Batman does, however, get a chance to use the famous Bat Shark Repellent Spray that previously showed up in Batman the Movie when a shark threatens to disturb the surf contest. 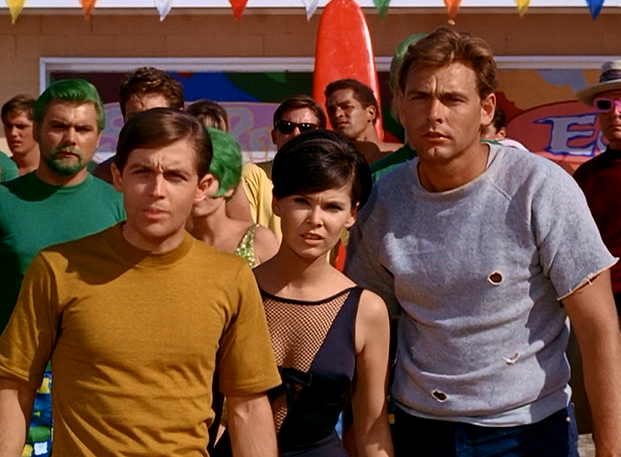 Speaking of Yvonne Craig, her part in this episode is kind of unusual when compared to this season’s other installments. Barbara Gordon pretty much just hangs out at the beach for most of this episode. She doesn’t do any investigating and only shows up as Batgirl to get in a few kicks during the final fight. On the other hand, her presence in this episode is memorable due to the fact that she spends all of her scenes (except the final fight) in a bathing suit that I’m surprised made it past standards and practices for a family hour show in 1967. If the young male bat fans didn’t have a crush on the lovely Miss Craig already, they surely did by the end of this episode.

There are certainly better episode of this series, but if I could only have one episode of this series for the rest of my days, I think it would be this one. It’s just so much fun and perfectly illustrates how this series could go to some fantastically crazy places. Now, then, as for the teaser for next week’s villains, we are actually taken across the globe to the UK and the city of not London, but Londinium. There we see two new villains, Lord Marmaduke Ffogg and and Lady Penelope Peasoup, in the midst of a heist. So, it looks like our heroes will be heading for the other side of the pond in The Londinium Larcenies. Same bat-time, same bat-channel (superhero).