The collapse of Danny’s life in New York is almost complete. He lost Rand, he cannot trust Colleen anymore and the Meachum’s are unpredictable. After an episode filled with deception and betrayal, we are left with one question. After 10 episodes, is the most honest person Danny has met since returning to New York, Madame Gao?

Goa is undoubtedly dangerous and devious but because of the weakness she sees in Danny she approach him differently. If Danny were a classic Iron Fist she would probably result to full force to defend her projects and defeat him, but convincing a confused young man to do something would be easier and less dangerous. Their interaction in this episode may have been Finn Jones’ worst moment of the series. The blue lighting of the computer screen didn’t do him any favors and you could tell he was putting in work; but he may be incapable of quickly switching emotions or at least displaying them on his face. I understood how he was feeling in the moment but it could have gone more smoothly with less work on my part.

He will have a lot of emotional weight to carry in the final three episodes this season and I hope he will be up to the task. His acting was fine during the pivotal scene with Colleen but the way the character is written is extremely frustrating. He is so unwilling to listen to anyone or even think for himself, he just reacts on preconceived knowledge and lashes out like an injured animal or temperamental child. He has to continue to grow as the season comes to an end if Netflix and Marvel want his popularity to reach the level of their other heroes when the Defenders come together this fall. 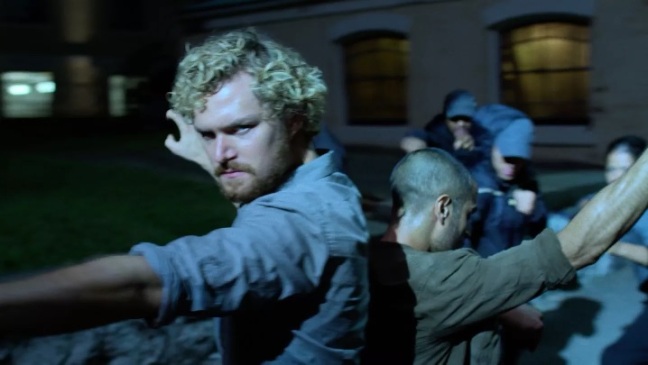 The highlight of this episode was the introduction of Davos and the fight scenes between him, Danny and The Hand. His fighting style is similar to Danny’s in movement but much more brutal. He has come to take Danny home to fulfill his role as the Iron Fist the city’s protector and won’t take no as an answer. He was Danny’s surrogate family in K’un Lun and he must be angry on so many levels. Danny became the Iron Fist over him, and then Danny left his post leaving the city open to attack and left his brother without explanation. This dynamic should make things much more stressful Danny, as he has to face his own disloyalty while coming to terms with what happened with Colleen. Will Danny’s quest for revenge keep him in the city or with the loss of Rand and Colleen force him back to the monastery? I cannot wait for next week to find out, I just hope it can be as action packed tonight’s episode.