Well, it’s time to wrap up this big three-part Batman story. When we last left Gotham, Batman and Robin, clad in suits of armor, had been knocked out by Penguin and loaded into a scrap metal truck. Now they are in the process of being compacted. Let’s see how they get out of this one in The Penguin’s Disastrous End. 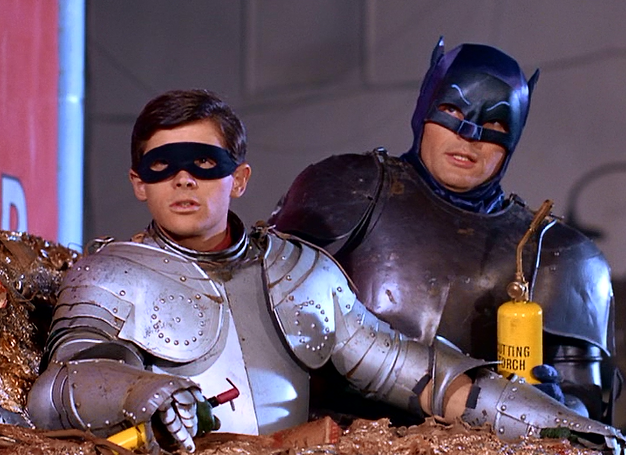 Right after the credits finish, a large block of metal emerges from the machine. A piece is then cut open from the inside and our heroes emerge. They explain to the hapless junk man, who unwittingly dumped them into the machine, that they used their Emergency Bat Air Pumps to counter the pressure of the machine. This allowed them to survive long enough to use their Bat Cutting Torches to slice their way out. 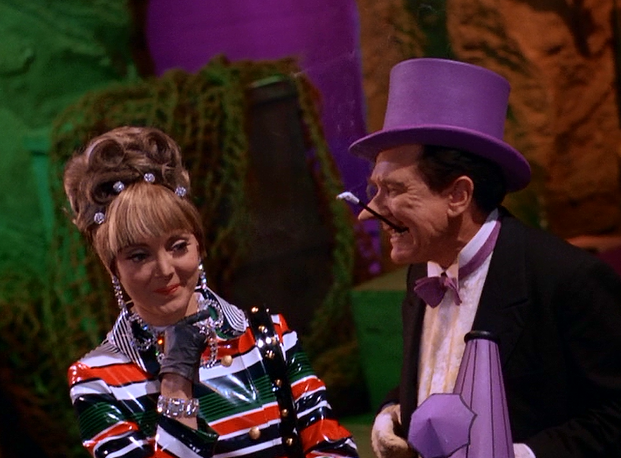 Meanwhile, Penguin is stashing the stolen suits of armor from earlier into the vault in the cave of Marsha’s Aunt Hilda, the witch. Now armed with an old toad, Hilda can start working on a love potion that will be used to distract the guards keeping an eye on a large supply of gold bullion. Between the potion and Marsha’s “Dance of the Seven Veils,” the guards will be distracted while Penguin goes for the gold. Oh, and we do learn one more thing…Hilda’s supply of lizard’s have escaped. 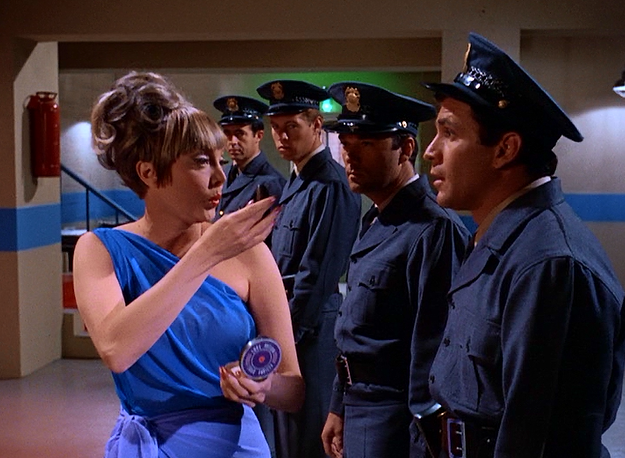 When Batman and Robin hear from Gordon about lizards roaming the city, they immediatley think of Hilda. They find a manhole cover that witnesses reported lizards emerging from and follow the tunnel to Hilda’s lair. Only one of Penguin’s goons is there at the time and he says something about how Gotham City will be “in the soup.” That’s just the clue our heroes need. Soup…as in bullion. Penguin is after the gold!

Turns out that the plan is already in full swing, with Marsha doing her dance for the guards. At the same time, Penguin seems to be bringing things into the vault rather than out. When Batman shows up, all the baddies duck into the vault and lock themselves in. Knowing that there is a limited supply of air, our heroes decided to wait it out. But Penguin stays in longer than expected…three days in fact. You see, he brought in extra air canisters. He’s working on something in the vault, but none of us know what. Then, after days of waiting, Penguin busts out of the vault in a solid gold tank! You see, in a previous episode, he stole plans for a tank from the Hexagon. His men built the tank out of gold and now they’re all on the run. Too bad the tank is no match for the Batzooka. Once again, the Caped Crusaders are victorious.

This was a great conclusion to this three-part story. It was nice to get more of Carolyn Jones as Marsha this time. In part two she pretty much just had a cameo. Here she turns up the steam like she did in part one; doing a seductive dance to distract the guards. I do wish that Marsha had been a bit more involved with the scheming. Her role is pretty much just to sex things up a bit. Penguin is the one doing the plotting…and what a wild plot it is. 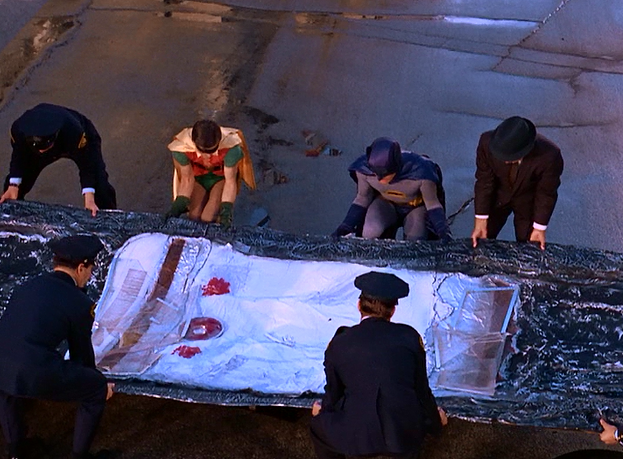 When Penguin locks himself and his gang in the vault, I really had no idea where this was going. All we the audience know is that he planned to be locked in and was working on something. When the tank bursts through the wall, it is completely out of left field. Even Batman and Robin can hardly believe it. The best moment of the tank chase, though, involves an incredible act of bravery by Chief O’Hara. He pulls his squad car right into the path of the tank, which promptly rolls right over him. The car is completely flattened. It plays out much like a cliffhanger that we would see at the end of an episode. When Batman and Robin move the flattened car, we see that it was right on top of a sewer grate and O’Hara somehow crawled into it and avoided being squished. It’s a better resolution than we’ve seen out of some of the show’s actual cliffhangers. 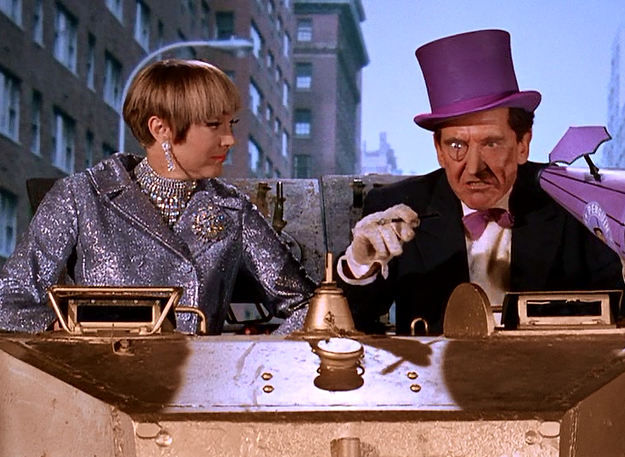 All this stuff makes for a wonderfully ridiculous episode. Even the ending has Bruce, Dick, Aunt Harriet and Alfred screening the movie footage that Penguin shot in the previous episodes. We’re told that Batman has donated it to the Wayne Federation of Boys Clubs. To cap it all off, we’re told that for some reason Aunt Hilda has gone back to teaching a cooking class at the Bruce Wayne School of Home Economics. While I’d love to enroll in a course there, I have no time with all these episodes to review. Speaking of which, next time a classic villain finally returns for his first, and only, season two story. It’s our old friend the Riddler…but looking a bit different this time. The Addams Family’s John Astin takes over for Frank Gorshin in Batman’s Anniversary. Same bat time, same bat channel (superhero).