The final episode is upon us and Jesse is planning the most important long distance phone call in history. there is a church full of people, the right phone, an angel hand so Jesse is as ready as he could be but will God answer the call. The opening scene of the episode shows the town going about their lives as “The Time of the Preacher” plays on the radio and the DJ reminds us that Eugene is missing and Jesse is on the run from the police. Which is played for a bit of comedy as we instantly see him sprinting down the street with a cop car in pursuit. Throughout the episode, we are shown a large clock that is counting down to Sunday mass leaving just a little bit of time to tie up loose ends with a few story lines.

The main story that needs to be finished is Tulip V Carlos. We finally find out why Tulip is so angry and what the leading cause to Jesse returning to his small hometown was. The flashback scene is a highlight for the episode seeing a Jesse and Tulip together and happy before Carlos double-crosses them. The main cause is a bit cliché; the loss of a child is a very common motivator for life changing events in film and television. Maybe Jesse turned to the church to renew his faith so he could believe that their unborn child was in heaven and that he could join it one day if he repented enough. Just hours before heading to the church Tulip and Jesse are able to get their revenge in Carlos in a manner that left me surprised. The twist on the ending was a nice way to balance the generic beginning to their quest for revenge. 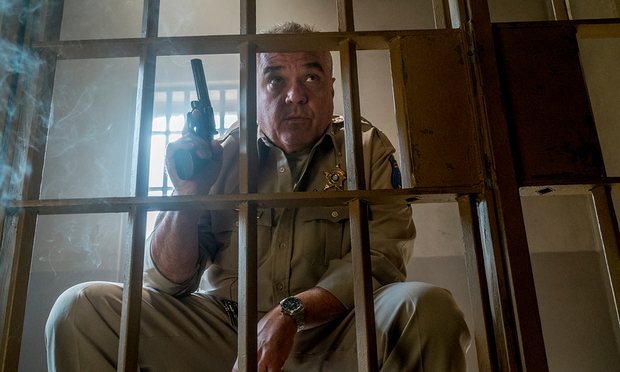 In a very surprising twist, the sheriff finds out about Cassidy and uses that knowledge to try to torture information about Eugene out of him. The fact that the sheriff could conclude that Cassidy is a vampire all on his own is a bit surprising and unfounded. Other than finding arrest records for Cassidy and noticing that he wears big floppy hats and strange clothes, he has no reason to suspect that he is a vampire. After everything that has happened to him and his family over the last few years I guess he ready to believe anything and sacrifice everything if he is wrong. It is a fun and entertaining scene even if it is rooted in something that does not make much sense.

On the tenth day, the preacher said let there be God, and he was there and he was not good, for several reasons. First, we can talk about the look of him,

The whole set up looked more like a live action version of Family Guy than what I was expecting. Maybe they could not go with the standard disembodied voice because of the “shocking” reveal that happened at the end of the call. The effect and costume looked cheap and then the cause of the revelation left me with this look on my face.

I am excited about where things will go with our trio of main characters as they speed of into season 2 but it would be a lie to say I was not disappointed with the conclusion on season 1. It was more the execution of it all than the actual storyline. I am fine with a missing God, the town being destroyed and the appearance of the cowboy, but the why and how of it all was very underwhelming. The town knows that there is a God unless they believe Jesse is the greatest magician ever and because of one fact, they decide to indulge in any and every sin that they want. I hope the crew can stay together and meet lots of interesting characters while they are on the hunt and being hunted next season.