When we last left Gotham City, Batman and Robin had been captured by Mr.Freeze (Otto Preminger) and are about to be turned into Frostie Freezies. How can they possibly escape? Let’s find out in our next episode, Deep Freeze.

Our heroes have been left to shiver to death by Mr. Freeze, who has returned to his lair to make sure that the kidnapped Miss Iceland is well on her way to becoming his icy equal. As their teeth chatter, the Caped Crusaders start to feel around with their feet for a valve that can let some heat in. We then cut to Freeze in his hideout discussing a plan to ransom 1 billion dollars from Gotham City or else he will freeze the entire city. We then cut to the Batmobile speeding down the street. So…we don’t actually see our heroes escape. All we know is that Batman starts theorizing about exhaust valves and reversing the flow and somehow using their presumably baboon-like toes to do all this. Then during the cutaway they’ve miraculously escaped. Worst cliffhanger escape ever!!!

Meanwhile, public opinion of our heroes continues to drop when a photo appears in the paper implicating Batman in the theft of Commissioner Gordon’s watch. Batman decides that the best plan may be to have the Caped Crusaders lay low to lure Mr. Freeze into a false sense of comfort. It’s not easy though. While visiting town as Bruce and Dick, our heroes see a little boy scowl at a photo of the Dynamic Duo and say, “Boo, Batman!”

Freeze sends his blackmail note to Commissioner Gordon and to show he’s serious, he freezes the water reservoir solid…in the middle of August. Gotham descends into panic. Meanwhile, Freeze anxiously awaits Miss Iceland’s transformation into a sub-zero beauty queen. To speed things up a bit, he encases her in a coffin of ice. But now the time is right for our heroes to come out of hiding. They scale Freeze’s hideout and battle his gang of henchmen. Unfortunately, they end up trapped in Miss Iceland’s cell. However, when Freeze tries to blast them with his ice gun, it has no effect. Seems our heroes coated their costumes with some Bat Anti-freeze. Now they have the upper hand and easily take care of Freeze and his men before releasing Miss Iceland with an icepick.

This episode is a bit of an improvement over last week’s installment. At least Freeze has a bigger, more impressive, plan this time around. Last time it was just all about wanting to get busy with Miss Iceland.  It’s actually not that far off from a plot element of the one big screen appearance of Mr. Freeze, Batman and Robin. In that film, Freeze’s big endgame was also to coat all of Gotham in ice. I also thought Preminger was a bit stronger as Freeze this time, actually going a bit beyond the show’s usual campiness and being fairly sinister. 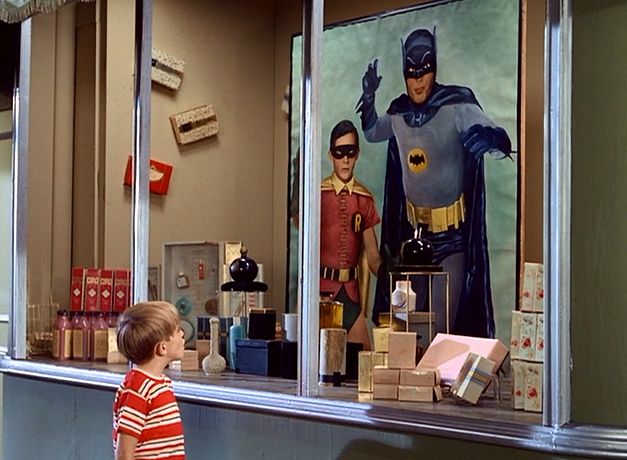 Still, the campier elements rule in this episode. By far the best moment is the one involving the little boy. The kid stares into a shop window, displaying an odd mix of perfumes and Pepto Bismo arranged in front of a poster of Batman and Robin. He shouts, “Boo, Batman!” Apparently this six-year-old reads the Gotham newspaper and all the scathing articles being penned by reporter Nellie Majors (from the previous episode). Which, by the way, I got the impression from the last episode that Miss Majors may have been in league with Mr. Freeze. That doesn’t appear to be the case and although she does appear in this episode her less than honorable journalistic practices are never confronted. Anyhow, back to the kid…the highlight of the scene is Bruce’s response. “Nothing has ever cut me so deeply to the quick. No blow struck by any arch villain has ever hurt me so acutely as that little boy’s boo.” Fear not, though, at the end of the episode Batman meets up with the same boy (who just happens to be hanging out in the hall outside Gordon’s office) who he holds hands with while sharing an elevator ride. That’s not creepy at all!

I still wouldn’t put this two-episode cycle into the upper echelon of the show, but part two does end up being more satisfying that its predecessor. Next time, though, Batman has to do battle with one of his greatest foes. Cesar Romero is back as the clown prince of crime in The Impractical Joker. Next week…same bat time, same bat channel (superhero).