After the exciting conclusion to the first episode of the new season the second episode starts with Foggy on a frantic search for the injured Matt. The mystery of who Daredevil’s rooftop opponent was is slowly being brought into the light literally and figuratively. We finally get to see The Punisher in the light for the first time and get a good look at John Bernthal’s Frank Castle. We also learn that the moniker The Punisher is the code name given to him by the police and District Attorney’s office. 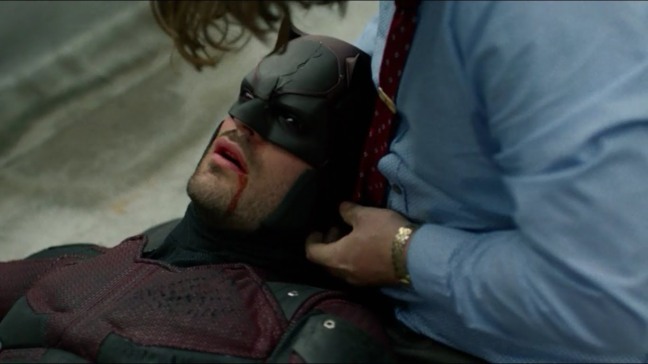 Elden Henson as Foggy really gets to shine in this episode from his frantic search, to his impassioned argument with Matt and his handling of the D.A. he is a highlight in every scene. We know that Foggy is a good lawyer but it usually feels like Matt is in charge when the two of them are together and while Matt is recuperating we get to see the legal force that Foggy is capable of. Even though Matt’s activities as Daredevil cause him countless moments of anger, sadness, and frustration Foggy doesn’t hesitate to rush into the fray to try help his best friend displaying an amount of loyalty that Matt needs but may not deserve. He is the best kind of partner, friend and sidekick that any hero could ask for. As the season goes on I am predicting at least a temporary falling out between the two and excited to see the performances and dreading it for characters.

Matt is severely injured throughout the episode, appearing to suffer from a severe concussion. During a shirtless scene that shows off all the hard work Charlie Cox has put in to be the man without fear we get to see what evidence remains of all the battles that Matt went through during season 1. Matt’s story this episode is the most frustrating for me as I couldn’t stop wondering why he wouldn’t call Rosario Dawson’s night nurse for medical attention. His action scenes are still very good and his acting is top notch and his second showdown with The Punisher almost goes his way. With how the episode ended I imagine we will get the see the scenes of Daredevil chained to a chimney or some other structure that were so heavily promoted leading into this season. Hopefully he won’t spend too much time in the clutches of The Punisher if he plans to move forward with the flirtations with Karen that are quickly ramping up.

Karen is a smart and capable women but her relationship with Matt is a bit disappointing. As Foggy makes more and more excuses about Matt being clumsy or recovering from another binder Karen’s attraction appears to grow. Now that Matt’s actions are forcing him to miss one of the most important client meetings in the history of Nelson and Murdock the flirtation is at an all time high. Who knows how the relationship will progress because she will undoubtedly discover Matt’s secret and may have to share her own.

The best scene that doesn’t involve Foggy is a scene of the Punisher making a trip to a pawn shop. He has heard stories that the owner has a dispatch radio from a police cruiser that would allow him to listen in on all officer related talk. The transaction goes well for the store owner until he tries to push the Punisher to buy some other illicit goods. Once the shop owner crossed the line he cannot be forgiven and must face his punishment. Bernthal is very intimidating as the single minded man on a mission who has no time for small talk and only interacts to reach his goals. I think we are headed into Garth Ennis/Punisher territory and his famous “Choice” story-line from the comics. It should be noted that in that particular arc, Punisher got the drop on Daredevil by using a sonic trap. Here though, since Punisher was unaware of Matt’s abilities, they made the vulnerability come more naturally. Matt nearly succumbs to his injuries from their first encounter at one point allowing The Punisher to get the upper hand.

The second episode was better than the first, it had better action and it really highlighted Foggy and the Punisher so I have high hopes for episode 3: New York’s Finest.