If you like Flashes, not just the Flash but Flashes, then this is the episode for you. Its got Old Flash, Reverse Flash, Kid Flash and, of course, the Flash so it should move quickly, right? It’s also got some rogues and a dash of Outsiders.

The teaser has a confrontation between Batman and snake themed villain Kobra. Kobra is planning to sacrifice a lady to a giant snake statue in order to unleash chaos all over the globe. I’m not real sure how that is supposed to work, but it doesn’t matter because Batman is intent on stopping him. Batman is outnumbered by Kobra and his minions, but luckily he has the Outsiders on hand to back him up. In contrast to previous appearances by the Outsiders, this time the lineup consists of 5 teens instead of three. Since we last saw the team of teen trainees they have added Geo-Force and Halo to their ranks. Halo is a character that I can take or leave, but Geo-Force has always been my favorite Outsider, so I’m glad to see him finally show up. The group saves the lady from being sacrificed, and Geo-Force saves the day by using his Earth manipulation powers to stop the snake statue (that has now come alive) from killing Batman. 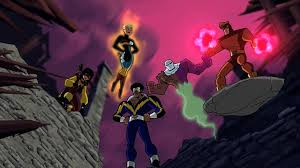 Our story proper starts with Batman stopping 3 of the famous Rogues of Central City (Heatwave, Captain Cold and Weather Wizard) from robbing a bank. The longtime Flash villains lament the recent death of Barry Allen, admitting that they miss their departed nemesis. As the battle sallies forth, Jay Garrick (the Golden Age Flash a.k.a. “Geezer Flash”) and Kid Flash show up to even the odds against the Villains. After the bad guys are defeated, Batman notices that Kid Flash treats Jay rather coolly.

We get a montage of reminiscence about Batman and Flash working together at the beginning of the episode, and that works really well to set up a feeling of emotional loss about the character being absent. The montage also treats us to scenes of classic villains like Mirror Master and Captain Boomerang. Jay and Batman discuss the circumstances surrounding the “death” of the Flash and how those circumstances have lead to the animosity Kid Flash feels towards Jay.  The death, and subsequent rebirth, of Barry Allen were significant events that heavily impacted a twenty year era in DC comics, so I think it’s great that this is being tackled for the series. This also explains why Barry Allen has been conspicuously absent for the first season and a half. The series has already established that it is not afraid to deal with the mortality of heroes, having previously covered the life and death of Ted Kord and more recently the death of B’Wanna Beast. This episode is the first time we get to dive into the comic book trope of resurrecting a character (after all, in comics no one stays dead).

Jay has been seeing Barry’s ghost, Batman later sees it, later still Kid Flash admits that he too has seen the “Ghost Flash”. The trio of heroes use the Flash’s old cosmic treadmill to trace the “Ghosts” vibration signature, and find that he’s not dead – just merely transported to the future where he is imprisioned by the Reverse Flash. While our gang of heroes are happy Flash is alive, they are not sure how to face the challenge of rescuing him. Their initial rescue attempt fails so badly that the other two Flashes are captured, and Batman alone is left to pull off the rescue. Batman does manage to gain his own speed powers, but is still no match for the sinister Reverse Flash. The trio of speedsters entrapped cleverly find a way to free Barry while the eldest and youngest Flash remain imprisoned. Thankfully, once the man of the hour, Barry Allen, is free Reverse Flash’s reign is doomed. Barry defeats the big bad, and our heroes return to present day with all seeming right in the world. 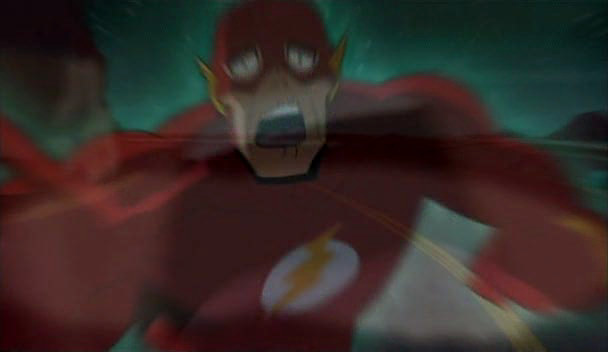 A good episode, solid action, a nice cache of characters, and a touch of sentimentality. This is one of this episodes that really seems to embrace the legacy of the comic book characters, while still firmly creating a new story. Flash fans like to debate about which Flash is the best, but no matter which is your favorite, he is in this episode (unless you’re one of those Bart Allen weirdos).